At Keeneland November in 2007, the sales catalog listed 31 horses as stallion prospects. You don’t know 30 of them. Eleven didn’t sell. One brought $130,000. Another just $1,000.
The one you do know, West Virginia phenom Fiber Sonde, sold for $8,000. Looking to expand the stallion roster at their Beau Ridge Farm near Charles Town, John McKee and Cyndy O’Bannon made the successful bid – and unknowingly changed their lives. 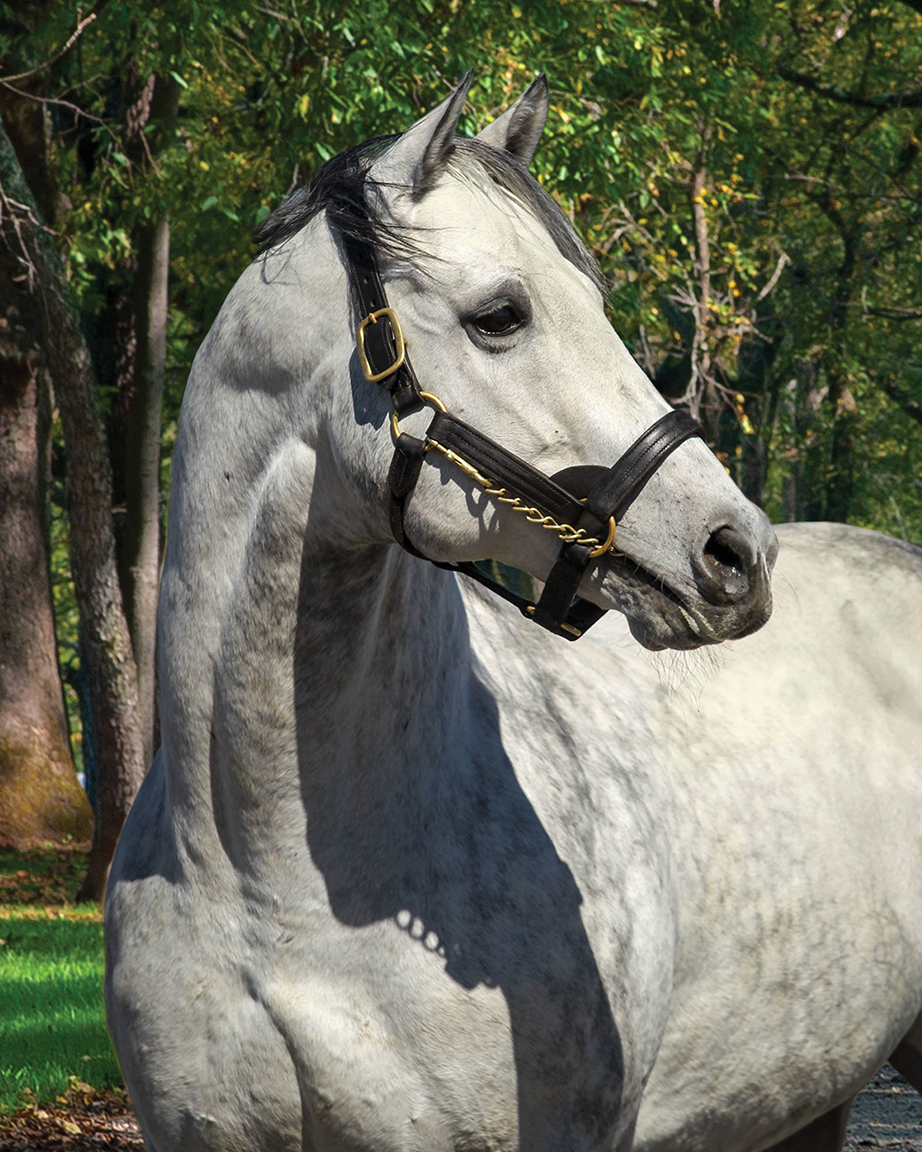 “It don’t take too many bids to get to $8,000,” said McKee recently with a laugh. “I’m sure they started at 50 thousand, then 25, then maybe 10 and probably one or two. Our budget? We thought we paid a lot for him at $8,000.”
A 2-year-old, Fiber Sonde was unraced and essentially untrained. He’d been injured on a paddock fence, and still has the scars to prove it. X-ray issues kept him out of a yearling sale. All of it kept him from a racing career. But he was by Unbridled’s Song and out of the Storm Cat mare Silken Cat. That made Fiber Sonde a half-brother to champion sprinter and (at the time) in-demand young stallion Speightstown. The latter has since gone on to great things – with an $80,000 stud fee, six top-10 finishes in the annual sire rankings and 100 stakes winners.
His kid brother – who stands for $1,000
– is doing OK, too.
In 2018, Fiber Sonde’s sons and daughters earned $2.7 million and won 127 races. Lifetime, the progeny earnings are closing in on $9 million, with about 80 percent winners from starters. And . . . and, his daughter Late Night Pow Wow won Laurel Park’s Barbara Fritchie-G3 in February and was aiming for the Grade 1 Madison at Keeneland April 6.
McKee bred Late Night Pow Wow, and sold her privately to Charles Town trainer Javier Contreras. The dark bay has won 11 of 12 starts, including two graded stakes, and earned $619,400. Contreras recently sold the 4-year-old filly to national stable Breeze Easy, but trains her at Charles Town. She’s very much a local success story, and something of a business model for McKee.
He doesn’t advertise Fiber Sonde, keeps that stud fee at $1,000 and is selective about what mares go to the now 14-year-old gray.
“We turn down a lot of mares, not on the quality of the mares, but whether it’s people who have supported us through the years,” said McKee. “We don’t advertise him at all. We’ve kept him at $1,000 which is almost a giveaway. I don’t take mares that I know aren’t going to run at Charles Town. We want to get West Virginia horses running.”
McKee, who helped push the West Virginia Thoroughbred Development Fund through the legislature, believes in the West Virginia program and supports it with his farm, his stallion and his mares.
“I’m from this area,” he said. “I was president of the breeders when we fought like hell to get it through. It’s gotten depleted a little over the years, and some of that is coming back now, but it works. The original bill said we might have one [West Virginia-bred] race a day, then it was two, now it’s five, six, seven of them.”
Fiber Sonde’s success is tied to that program, though even McKee treaded lightly at first.
“He didn’t get many mares early,” McKee said. “I didn’t breed many mares to him either. You want to be a little cautious because if you’re not you can end up with a lot of not-so-good horses on your farm. And then he turned out to be good.”
His first crop included six runners as juveniles. Four were winners. 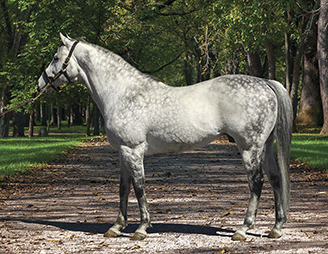 he curve has tilted upward ever since with stakes winners Hidden Canyon, Flirting Song, Ghost Fever, Moonlit Song, Bullets Fever, Runnin’toluvya and more flying on the racetrack. Almost all raced exclusively at in-state venues Charles Town and Mountaineer. Many were bred by McKee and/or O’Bannon, and pretty much all of them can run.
“We’ve had a lot of West Virginia-bred stakes winners and to do that is saying a lot because those are tough races to win,” McKee said. “The point is you can breed him to any kind of mare and get a runner. Some of them are good and some are mediocre, but they’re all runners.”
Fiber Sonde himself was not. Nobody’s really sure whether he’s ever been ridden. At Beau Ridge, he gets his exercise on the Eurociser free walker and otherwise spends his days in his stall (where he’s a cupcake), the breeding shed or somewhere in between.
“He doesn’t do anything bad,” McKee said. “Cyndy can do anything with him in the stall, without even tying him up. He’s easy. You take him out of his stall, he’s a stallion. When he comes out of his stall, he knows what that’s for.”
From across the room, O’Bannon completed the thought: “I don’t bring him out of the stall.”
Kentucky Roots
Bred by Aaron and Marie Jones, just like Speightstown, Fiber Sonde was sold at Keeneland by Indian Creek Farm but had spent time at Taylor Made Farm and remains something of an example there.
“Of all the horses we’ve sold, a hundred Grade 1 winners and all those horses, I have a picture of Fiber Sonde on my wall that John McKee sent me,” said Mark Taylor, vice president of marketing and public sales for the farm. “Just because it’s such a great story. The horse was not going to be viable, he wasn’t going to make it to the races, he had issues, and he just needed a good home and somebody to give him a chance and it all worked out.”
The stallion market can be a difficult bet with an unproven horse, even a horse that raced. Taking one with zero starts and dodgy X-rays – and trying to make him a stallion – now that’s a longshot. Thanks to a mutual client, Beau Ridge and Taylor Made built a business relationship 25 years ago and McKee was a regular buyer of horses that didn’t quite fit the model for the far-flung Kentucky operation used to selling high-dollar horses with gaudy records and loads of potential.
Speightstown sold for $2 million as a yearling. Mark Taylor figured the champion’s brother had to be worth something, and told McKee about the horse.
“He’s a big, good-looking horse and he’s gray,” McKee said of his first impression. “We liked Speightstown and he’s a half-brother so it made sense. He had things that made you think he’d make a stallion.” 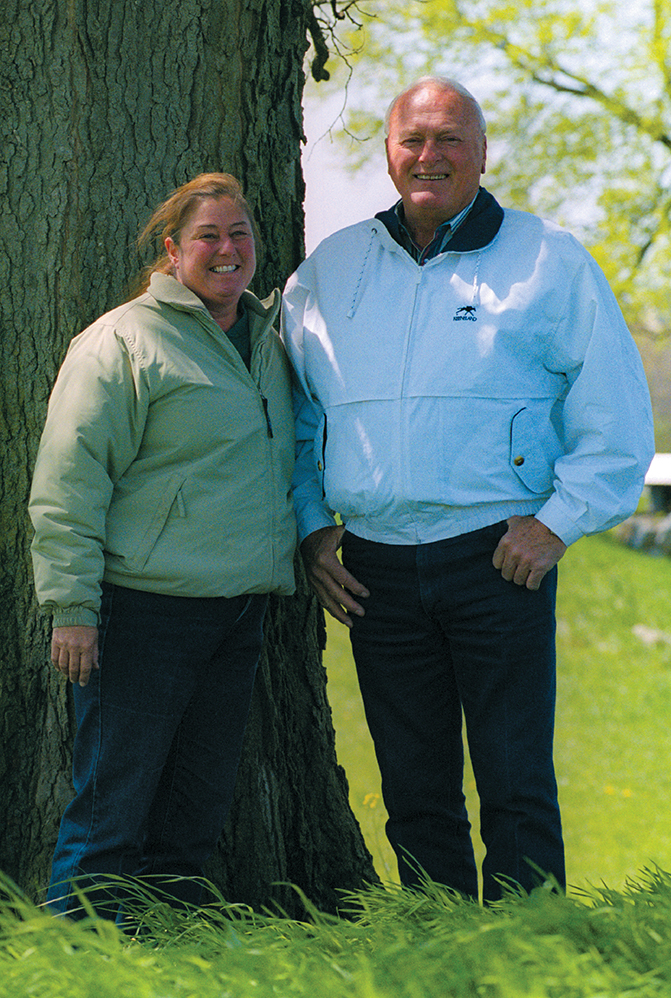 At the same sale, Beau Ridge spent $15,000 on Footnotes and let’s just say he was no Fiber Sonde. Whether it was luck or circumstance, something clicked with the West Virginia stallion and there may be more success to come
“He’s a really good stallion,” said Taylor. “People say, ‘Oh, it’s West Virginia’ but the bottom line is you can only do as well as the environment you’re planted in and he’s pretty much dominated up there. Now he’s got a horse that’s really serious anywhere.”
Star daughter Late Night Pow Wow will get a chance to push the family to new heights. She won the Grade 3 Charles Town Oaks on her home track in 2018, and has won three straight at Laurel Park culminating with the Fritchie. Even more opportunities beckon.
Like Fiber Sonde, Late Night Pow Wow has a Taylor Made connection. At Keene­land January in 2013, McKee and O’Bannon spent $5,000 to buy the Indian Charlie mare Holy Pow Wow. She’d run four times, earned $399. As a broodmare, she’s been bred to Fiber Sonde – over and over – and produced Indian Sound (a five-time winner), Late Night Pow Wow, a 2-year-old colt named Muad’dib and a yearling filly. Thanks to the success, other stallion options continue to present themselves.
“We got offered a foal share to Arro­gate, we could go to California Chrome, Speights­town, a lot of horses,” said McKee. “But the foal would have to bring more than $150,000 at the sale for it to be worth it for what I get for the foal plus breeders awards and stallion awards. At this moment, we’re going to stay with Fiber Sonde. How much better can it get?”
In early March, the veterinarian was due in soon to check to see if Holy Pow Wow was in foal – to Fiber Sonde.
“You know, why mess with what’s working,” said Taylor. “It’s a free season to him, and he’s got the genetic switch switched on. If that baby looks good, somebody’s going to buy it for something serious. It’ll be worth something.”
Just like its sire.