For more than a century, Mid-Atlantic-bred horses have gone on to classic success. Of the 57 wins posted in either the Kentucky Derby, Preakness or Belmont Stakes since 1876, 13 were won in years ending in either a three or an eight. And three could be the magic number–multiple wins were recorded in 1913, 1983, 1993, and most spectacularly, Secretariat’s Triple Crown in 1973, 40 years ago this year.
What follows is a closer look at the classic winners going back 125 years. 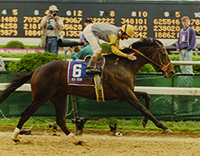 1993
SEA HERO–Kentucky Derby
Legendary Virginia owner/breeder Paul Mellon had international superstars, but got his first win in the Kentucky Derby with Sea Hero’s improbable score in 1993. Carrying the famed gray and yellow Rokeby silks, the Mack Miller trained runner cruised home by 2 1/2 lengths at 12-1.
The win provided Mellon with a unique accomplishment, as the only owner to have won the Epsom Derby, Arc de Triomphe and Kentucky Derby. 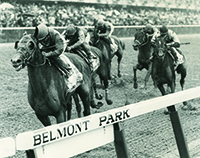 COLONIAL AFFAIR–Belmont Stakes
Virginia-bred Colonial Affair made history with his victory–his jockey, Julie Krone, became the first woman to win a classic.
The colt, by Virginia-bred Kentucky Derby/Preakness winner Pleasant Colony, was bred by Hermen Greenberg and foaled at his Rutledge Farm near Middleburg. Campaigned by Centennial Farms, Colonial Affair recorded his only stakes win of the year at nearly 14-1 ?for trainer Flint “Scotty” Schulhofer. 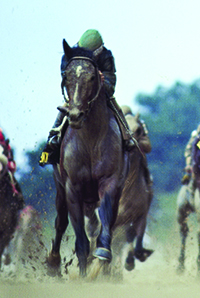 1983
DEPUTED TESTAMONY–Preakness Stakes
Mud-drenched Deputed Testamony shone in front of the hometown crowd at Pimlico for the Boniface family and Francis P. Sears. Trainer J. William “Billy” Boniface hoisted local jockey Donnie Miller up on the colt, a son of Bonita Farm stallion Traffic Cop, and watched as the throng erupted when Deputed Testamony rallied up the rail and won by nearly 3 lengths. He rewarded his faithful $31 for the win.
Deputed Testamony remains the last Maryland-bred to win the Preakness Stakes.

CAVEAT–Belmont Stakes.
One month later, the Maryland colors flew again as August Belmont’s Caveat survived a near disaster on the far turn and proved his stoutness through the stretch to draw off for a 3 1/2-length win over Slew o’ Gold. Bred by Jim Ryan’s Ryehill Farm, Caveat had finished third in the Kentucky Derby and bypassed the Preakness–trainer Woody Stephens electing for a 1 1/16-mile allowance against older horsees at Belmont over Memorial Day weekend, which Caveat won by 3 lengths.
The roughly run Belmont, in which Caveat was forced into the rail on the far turn before Lafitt Pincay Jr. pushed him through for the win, proved to be the colt’s final start. 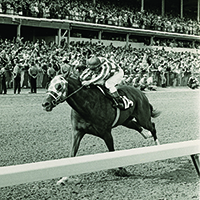 1973
SECRETARIAT–Kentucky Derby, Preakness Stakes, Belmont Stakes
Secretariat became a legend in the spring of 1973. The cover boy (he was featured on nearly every major national publication, including Time, Newsweek and Sports Illustrated) was incredibly handsome, incredibly fast, and took the American public on a ride they would never forget. His Derby record of 1:59.40 for the 1 1/4 miles and Belmont Stakes record of 2:24 for the 1 1/2 miles still stand. And in 2012 he was credited with setting a track record when winning the Preakness–his official time of 1:53 is now the stakes record.
Foaled at The Meadow in Doswell, Va., the bright chestnut flew the blue and white Meadow Stable silks in patriotic style. His Belmont Stakes victory, one of the greatest feats in sports history, was absolutely mystical–as he drew off by a record 31 lengths, with track announcer Chick Anderson yelling the iconic phrase “moving like a tremendous machine!” he went faster and faster, breaking the world record and coming closest to Pegasus than any horse before or since.

1938
PASTEURIZED–Belmont Stakes
Bred in Virginia by his owner, Carol Averell Harriman Smith Stewart, wife of W. Plunkett Stewart, Pasteurized came out on top in one of the closest finishes in Belmont Stakes history, defeating Preakness winner Dauber by a neck, with Cravat another neck back in third.
The son of Milkman had plenty of Belmont history riding with him. He was the second Belmont Stakes winner in three years for jockey James Stout, who won in 1936 with Granville. Stout came back to guide Johnstown to victory in 1939 and was inducted into the Racing Hall of Fame in 1968. And trainer George Odom was one of the few to ride and then later train winners of the classic. He was aboard Delhi for the victory in 1904.

1928
REIGH COUNT–Kentucky Derby
John D. Hertz loved the fighting spirit of Reigh Count, and bought him privately as a juvenile from breeder Willis Sharpe Kilmer. ?The next year, carrying the colors of Mrs. Hertz, the colt easily won the Kentucky Derby by 3 lengths, defeating 21 others as the 2-1 favorite. He won seven of eight starts that year, and in 1978 was inducted into the Racing Hall of Fame.
Reigh Count, foaled at Kilmer’s historic ?Court Manor near New Market, Va., also succeeded at stud, siring 1943 Triple Crown winner Count Fleet for the Hertzes. 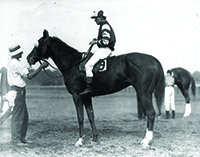 1913
BUSKIN–Preakness Stakes
A gelded son of Harry Payne Whitney’s classy stallion Hamburg, who had stood for nearly a decade at Brookdale Farm in Red Bank, N.J., Buskin was sold by Whitney to owner/trainer John Whalen. The little bay looked an easy winner of the Preakness when Hall of Fame rider James Butwell opened up at the top of the stretch, but tiring badly in the final yards, he just held off Kleburne to win by a neck. 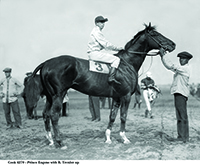 PRINCE EUGENE–Belmont Stakes
Prince Eugene was the second H.P. Whitney-bred son of Hamburg to be foaled at Brookdale Farm and win a classic that year?–?but this colt raced in the Whitney colors. The last of a record eight Belmont wins for trainer James Rowe, Prince Eugene got the jump on overwhelming choice Rock View and held off that rival to win by a half length. The time of 2:18 was a track record for the 13?8 miles.

1898
SLY FOX–Preakness Stakes
Bred in the name of Bowling Brook Stud, established by Hall of Fame trainer Robert Wyndham Walden in 1878, Sly Fox won one of the 16 runnings of the Preakness conducted in New York during Pimlico’s shutdown at the turn of the century.
Racing at Gravesend, Charles Dwyer’s chestnut colt won by 2 lengths and was ridden by Hall of Famer Willie Simms, the second African-American to win Preakness.

1888
REFUND–Preakness Stakes
Legendary trainer R. Wyndham Walden got the final Preakness win of his career with homebred Refund, who was ridden by Fred Littlefield, Walden’s future son-in-law. Refund was the seventh Preakness winner in 14 years for Walden, who had won five straight–1878 to 1882–for George Lorillard. Walden still holds the record for most Preakness wins.
Refund, a son of Lorillard’s unbeaten 2-year-old Sensation–was foaled at Bowling Brook Farm in Middleburg, Md.