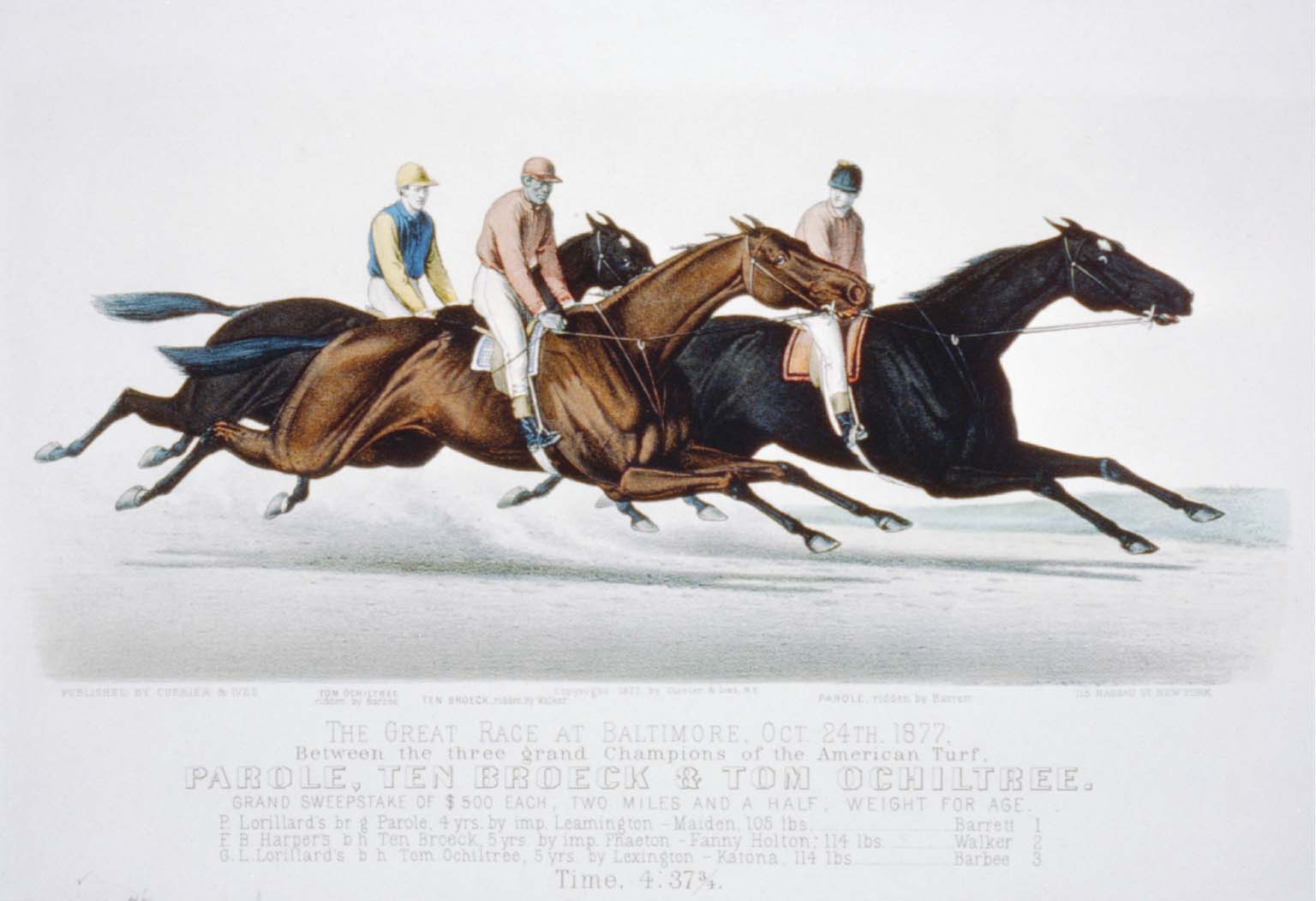 It took more than a year for the race to come together, but when it did, at Pimlico Race Course in Baltimore in October 1877, the nation was riveted. Five-year-old superstars Ten Broeck, the sensation from the West, and Tom Ochiltree, representing the famed East Coast stable of George Lorillard, were finally to meet, and joining them was the equally talented Pennsylvania-bred 4-year-old Parole.

Two are in the National Museum of Racing’s Hall of Fame. The third, Tom Ochiltree, joins them this year. Chosen by the museum’s Historic Review Committee, the 1875 Preakness winner will be inducted Friday, Aug. 12 in Saratoga Springs, N.Y., along with historic jockey Wayne Wright and contemporary selections Rachel Alexandra, Zenyatta, Ramon Dominguez and Steve Asmussen.

The race was titled “The Great Race” and the hype was immeasurable. Scheduled for opening day of the Pimlico fall meet, the 21⁄2-mile race included terms that it be run on a fast and dry track, to make it as fair a contest as possible for the first, and what would be only, meeting between Ten Broeck and Tom Ochiltree.

The two were the headliners after two seasons at the top of their division, albeit in different circles. Ten Broeck was a Midwest sensation, winning race after race in Kentucky and Tennessee.

Tom Ochiltree had major success at Pimlico. The son of the famed stallion Lexington, born in 1872 at A.J. Alexander’s Woodburn Stud in Kentucky, was purchased as a yearling by J.F. Chamberlain for $500. The colt was enormous. “For size, bone and courseness, Tom Ochiltree surpassed all contemporaries,” W.S. Vosburgh noted in the historic compilation Racing in America, 1866 to 1921.

The colt never ran at 2. His first start, for trainer R. Wyndham Walden, was a win at Pimlico May 26, 1875. Two days later he won the third running of the Preakness Stakes in Chamberlain’s silks with cherry spots.

But it was a rollercoaster season. The colt failed to hit the board next out in the Belmont Stakes and tailed off badly during the summer in the Jersey Derby and Ocean Hotel Stakes at Monmouth Park.

By mid-October, in the hands of trainer Anthony Taylor, the big bay was back on track. He won the Annual Sweepstakes at Jerome Park, surprising the crowd and his competitors, and a little over a week later won Pimlico’s Dixie Stakes, defeating among others Aristides, the first Kentucky Derby winner. It was reported Tom Ochiltree was then sold to Lorillard “for $5,000, and one-fourth of his winnings during the year 1876.” He was also returned to the care of future Hall of Famer Walden.

In October 1876, Lorillard was challenging Ten Broeck’s connections to a match race: “on the last day of the Baltimore Races, or the extra day of the Jerome Park Races in November, a 4-mile dash [a distance at which Ten Broeck excelled] for $10,000,” reported The New York Times. Ten Broeck was by then out of training for the year, so the idea was tabled.

The next fall clamor for the race between the two grew, and after Tom Ochiltree’s losses to the year-younger Parole, owned by Lorillard’s brother Pierre, Parole was considered a worthy addition.

Bad weather only added to the anticipation as attention turned to Pimlico Oct. 23. Rain made the track wet and heavy, postponing the race one day. The New York Times reported: “The owner of Parole requested the postponement, which was acceded to. The threatening weather of the past two days cleared off this afternoon with a bright clear sky, and by tomorrow the track will be in fine condition. The hotels tonight are crowded with visitors to the race from every part of the country, particularly from Kentucky and New York, the former backing Ten Broeck and the latter Ochiltree and Parole.” 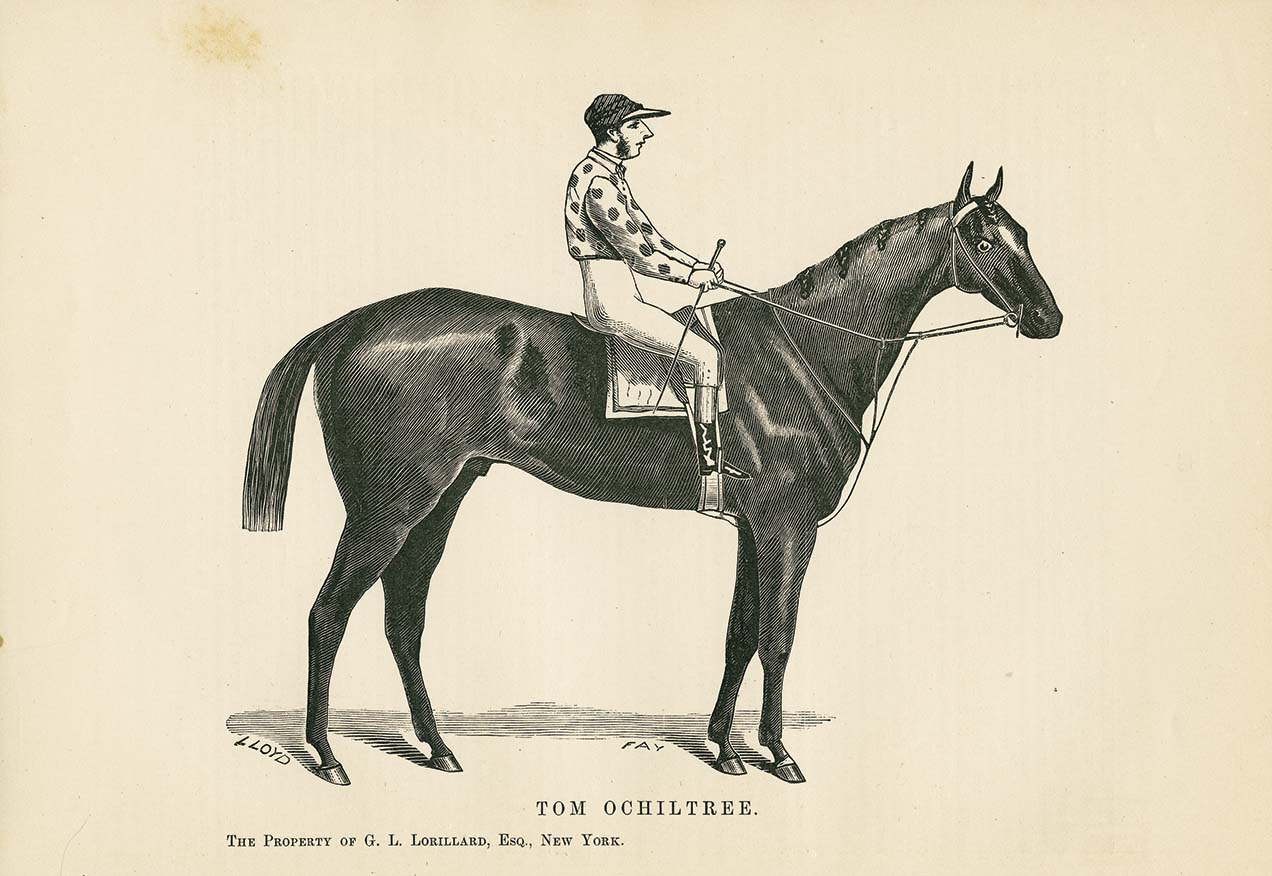 On race day, the Kentucky Livestock Record reported: “By 10 o’clock vast crowds of carriages were wending their way through Druid Hill Park to Pimlico. The attendance at Pimlico today was fully 18,000 to 20,000 persons. . .”

Among those in attendance were members of the U.S. House of Representatives, which adjourned early to see the race.

The horses reached the post at approximately 3:15 p.m., and the result couldn’t have been a bigger surprise. Ten Broeck led early, Tom Ochiltree pushed him and took the lead midway through, then with less than a mile to go Ten

Broeck rejoined the fray. After turning back Tom Ochiltree, Ten Broeck had nothing left when Parole rushed at him, and Parole went on to win by 4 lengths, with Tom Ochiltree well back in third.

The race was immortalized in the Currier & Ives print The great race at Balti­more, Oct. 24th, 1877: between the three grand champions of the American Turf, Parole, Ten Broeck & Tom Ochiltree, from which sculptor Bernard

After the race, reports came out that Ten Broeck and Tom Ochiltree had been coughing prior to the race. But Ten Broeck returned three days later and won the Bowie Stakes, thus casting doubt on his illness.

Tom Ochiltree was retired after the race with a record of 21 wins from 33 starts, at distances up to 4 miles. Standing nearly 17 hands, with no white except for a small star, he was one of the last great sons of his sire. Standing at Walden’s Bowling Brook Stud in Middleburg, Md., Tom Ochiltree had glowing recommendations as a stallion, as described in The Breeders’ Hand Book and Guide by S.D. Bruce: “He could run fast and stay under heavy weights. His great size, coupled with symmetry of form, should commend him to breeders. He is one of the truest and best shaped big horses in the world, all bone and muscle, without a particle of lumber.”

Unfortunately the Preakness winner – the first of Walden’s seven winners of the classic – didn’t distinguish himself as a sire, and died Dec. 29, 1897, at 25, at his longtime home in Maryland.