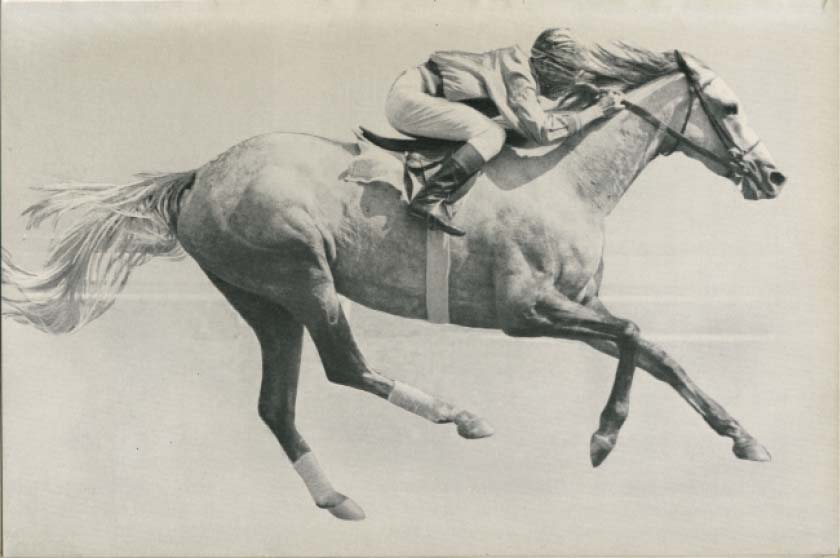 Open Fire won the richest race for fillies and mares in the world when she captured the $100,000 Delaware Handicap in 1966. The gray/roan mare, campaigned by her breeder, Delaware Park president Donald P. Ross, in the name of his Brandywine Stable, equaled the track record of 2:00 2⁄5 for 1 1⁄4 miles when getting her second stakes win in two weeks. At 5, she was finally fulfilling her connections’ high expectations.

Open Fire was a yearling when her half-brother Greek Money captured the 1962 Preakness Stakes. The Virginia-breds were out of a mare Ross had purchased, sight unseen, in December 1956 from the New­market sale in England while carrying her first foal.

*Lucy Lufton, a stakes-winning daughter of Epsom Derby winner Nimbus, was considered one of the top juvenile fillies in England in 1954. She was shipped to J. North Fletcher’s Crestone Farm near War­renton, Va., to start her broodmare career.

Open Fire emulated her sire, both in color and by getting better with age. Seven of Cochise’s eight stakes wins came at 4 and 5. All four of Open Fire’s stakes wins were at 5.

Trained by Virgil “Buddy” Raines, Open Fire had numerous nagging issues early in her career – from sore shins and ankles to bouts of tying up. She made 20 starts from 2 to 4, winning six times. In 1966, she won seven of 10, from 6 furlongs to 11⁄4 miles.

She recorded her first stakes victory in her 25th start, taking Delaware’s New Castle in mid-July by 4 lengths over 1964 champion 2-year-old filly Queen Empress. After scoring by 5 lengths in the Del ’Cap next out, she headed to Saratoga and won the Diana Handicap by 10 lengths over a field that included another former champion, What a Treat. The sloppy track didn’t slow her down – she set a track record of 1:48 4⁄5 for 1 1⁄8 miles.

A championship was within reach until she turned in her worst showing of the year, an 11-length drubbing in Aqueduct’s Beldame, a hard track considered the blame. Seeking redemption, she found it in Keeneland’s Spinster Stakes, the final start of her career. Facing a short field that included the previous year’s champion handicap mare, Old Hat, and Beldame conqueror Summer Scandal, Open Fire shot to the lead, gave way heading into the stretch and then drew gasps as she came on again. She drew off to defeat Old Hat and become Ross’ one and only champion.