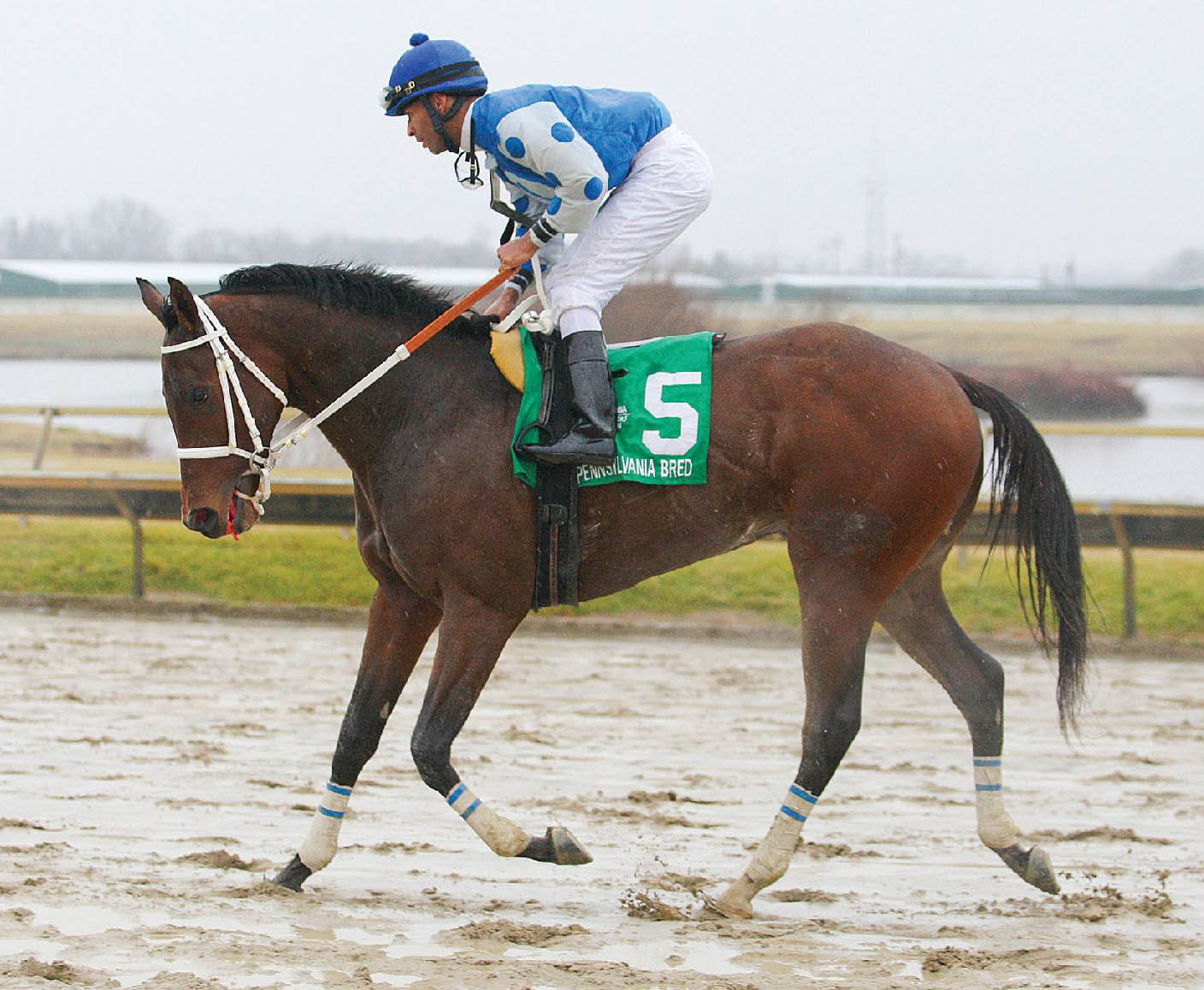 In 2003, a Pennsylvania-bred juvenile named Smarty Jones first captured the attention of the racing world when he dominated the Pennsylvania Nursery.

Even the most optimistic followers of the local scene could not have predicted Smarty Jones would go on to win the Kentucky Derby and Preakness Stakes undefeated, and in the process become one of the most beloved horses of the early 2000s.

Fast forward 11 years and a son of Smarty Jones, Someday Farm's Nasa, followed his father's hoofsteps with a 2¼-length win in the Pennsylvania Nursery Dec. 6 (2014), defeating longshots Inspector Kunu and Blitzensmajikreign. The winner was bred and is owned by Patricia Chapman, Smarty Jones' owner and breeder with her late husband Roy, and is trained by John Servis.

Prior to the Pennsylvania Nursery, Nasa broke his maiden in his second start Sept. 27 (2014) at Laurel by 9¼ lengths, and was third as the heavy favorite in the restricted Christopher Elser Memorial Nov. 16 (2014) at Parx. In his first start as a 3-year-old, he finished second in Aqueduct's Grade 3 Jerome Stakes Jan. 3 (2015).

Editor's Note: This story first appeared in the February 2015 edition of Mid-Atlantic Thoroughbred. 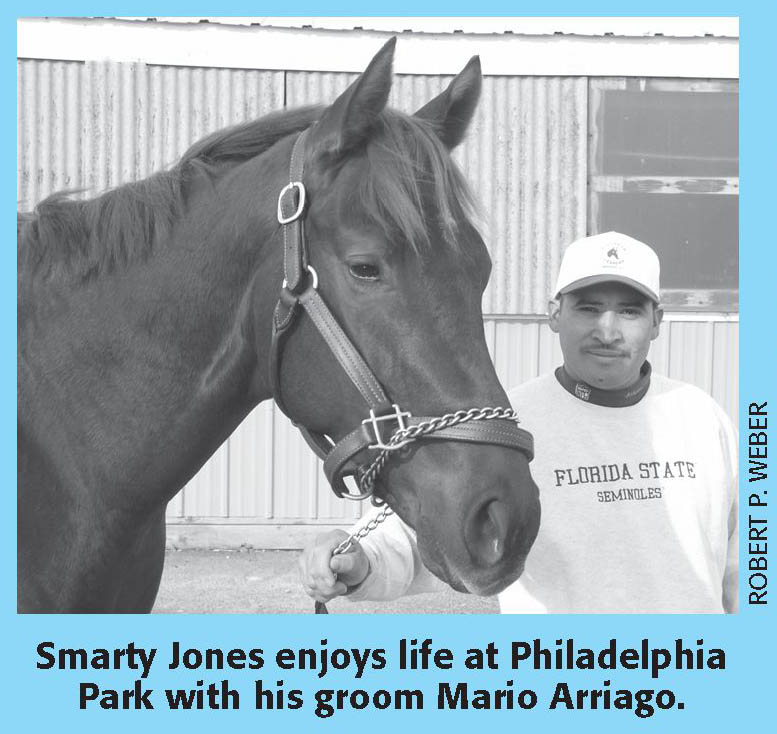 The second coming of Secretariat? Comparisons are premature, but anyone who watched the brilliant chestnut colt Smarty Jones draw off to a 15-length victory in the Pennsylvania Nursery, on November 22 at Philadelphia Park, had to be impressed. And that's putting it mildly.

Smarty Jones, who races for his breeders Roy and Pat Chapman of New Hope, Bucks County, and is trained by John Servis, was making only his second start when he blew away 10 state-bred rivals in the seven-furlong PA Nursery.

His debut had come at Philadelphia Park on November 9, in a six-furlong maiden special weight, which he captured by a similarly expansive seven and three-quarters lengths. Obviously loaded with speed, Smarty Jones completed the PA Nursery in 1:21.88, missing the track mark by only one and a fifth seconds; his time was just .28 of a second shy of the best time for that distance at Philadelphia Park in the past three years.

The question now looms—Can he go a distance? Or, more specifically, will he be up to the challenge of the mile and a quarter Kentucky Derby on the first Saturday in May?

The Chapmans, well-experienced horsepeople, are taking it one step at a time. "Smarty still has a lot to prove," said Roy Chapman, who has turned down "unbelievable" offers for the son of Elusive Quality. "But we would certainly love to take him to the big races this spring."

Smarty Jones is, in a huge sense, a part of the legacy of the late Pennsylvania horseman Bob Camac, explained Pat Chapman. Camac, who trained a sizable stable for the Chapmans until his tragic death in December 2001, spotted Smarty Jones's dam, I'll Get Along (by Smile), at the 1993 Keeneland September Yearling sale. Purchased for $40,000, I'll Get Along carried the Chapmans' colors to victory in the Alma North Handicap and William Parker Stakes and placings in seven other added-money races, earning $277,008, during a fiveyear career under Camac's handling. Smarty Jones is I'll Get Along's second foal.

"Bob not only picked out the mare, but he selected Elusive Quality for the mating that produced Smarty," said Pat Chapman. "We only wish he could be here to see this colt."

The Chapmans began breeding and racing horses in the late 1980s, and for a decade or so maintained a thriving operation at their 100-acre Someday Farm in Chester County, where Smarty Jones—their first Smarty Jones enjoys life at Philadelphia Park with his groom Mario Arriago. homebred stakes winner—was foaled. They cut back drastically on their horse holdings after Camac's death. "Losing Bob kind of took the guts out of us," in Roy Chapman's words.

"We sold almost everything we had." Including I'll Get Along, who brought for $130,000 at the 2001 Keeneland November sale. Since selling their farm three years ago, the Chapmans have divided their time between homes in Pennsylvania and Boca Grande, Fla.

Roy Chapman is semi-retired from his automobile dealership, Chapman Auto Group, that has branches in Pennsylvania, Delaware and New Jersey, leaving most of the day-today running of the company to his sons. But they have closely monitored the activities of Smarty Jones, who got his early education with George Isaacs at Bridlewood Farm in Ocala, Fla., before joining Servis's stable at Philadelphia Park.

"Smarty was a standout from the day he was born," said Roy Chapman. "George [Isaacs] told us, 'This is the one you've been waiting for.'"

"He was born on my mother's birthday," she said. "I wanted to name him after my mother, but we couldn't call him Mildred. Then I remembered that my mother's grandparents tagged her 'Smarty Jones.."