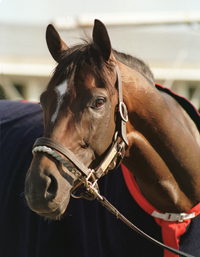 Two-time Horse of the Year Cigar, known as “horse of the world” during the height of his career in 1995 and 1996, was elected to the Racing Hall of Fame in his first year of eligibility.
Bred by Allen Paulson and foaled at Country Life Farm in Bel Air, Md., Cigar compiled a 16-race win streak which included 10 Grade 1 races (among them the 1995 Breeders’ Cup Classic) as well as the inaugural running of the Dubai World Cup. He retired with a North American earnings record of $9,999,815 from 33 starts.


Also honored was longtime Marylander Grover (Bud) Delp, who will be forever linked as trainer of Spectacular Bid. The champion 2-year-old of 1978 repeated as champion at 3 when winning six Grade 1 races that year, including the Kentucky Derby and Preakness Stakes. Delp saddled “the Bid” to an undefeated nine-race season at 4, when the big gray was named Horse of the Year and champion older horse. Under Delp’s tutelage, Spectacular Bid won 26 of 30 races and earned $2,781,608.
At the time of his election, Delp had sent out the earners of $37.5 million, and had 3,533 wins from 17,121 starts (21 percent win rate). His current stable star was Grade 1 Pimlico Special winner Include.

In an interview with Lucy Acton, Delaware Park owner Bill Rickman Jr. discussed the continual improvements at the track–which included the recent construction of an 18-hole golf course on 250 acres?–?as well as expansion into Maryland with the purchase of the Ocean Downs Standardbred track.
Asked if Delaware Park would have survived without slots (which arrived in December 1995), Rickman replied: “No. Absolutely it would not have. We would have done well–without the racetrack. Because the piece of property was going up and up in value. We have the largest piece of commercial property in the state of Delaware. Seven hundred acres of regional commerical property, right here. So it would be something today, but it would not be a track. We would not have developed it. Somebody would have. We would have just said no, we’re going to close.”
As to the concept of a circuit within the Mid-Atlantic region, Rickman responded: “It’s going to happen, someday. Because there’s no such thing as a Maryland horse or a Delaware horse or even a Pennsylvania horse. They’re all Mid-Atlantic horses. You have to work together, and we haven’t done it well in the past because egos are way too big.”

Reigning Maryland-bred Horse of the Year Include returned to repeat in the Jennings Handicap at Pimlico, his first start of the year. Robert Meyerhoff’s homebred was the headliner on the ninth annual Maryland Spring Challenge Day card, which featured five stakes, four restricted to state-bred runners. Carrying top weight of 123 pounds, Include cruised home by nine lengths.

The Grand National timber stakes, known as the “key prep” for the Maryland Hunt Cup, was won for the fourth consecutive year by a horse trained by Tom Voss. owned by the trainer’s wife, Mimi, powered past Swayo, Make Me a Champ and Young Dubliner (Ire). Voss sent out Welter Weight to take the previous three runnings.