Northern Dancer, one of the greatest sires in history, was officially retired from stud. “No special ceremony marked Northern Dancer’s retirement on April 15,” reported the Maryland Horse. “ ‘But we all cried a lot,’ said Windfields Farm’s general manager Joe Hickey. ‘It was a very touching moment.’ ”


The 26-year-old stallion was in good health, but midway through the breeding season it became apparent that his fertility and libido were waning. He was bred to 24 mares, but only three were found to be pregnant (by the time the retirement was announced, two had reportedly lost their foals). The one mare confirmed in foal was European champion Mrs. Penny.
Northern Dancer was to remain as a pensioner at E.P. Taylor’s farm in Chesapeake City. “Everything will stay exactly the same for him, except he won’t be breeding any more mares,” said Hickey.
Northern Dancer lived to the age of 29. Upon his death on Nov. 16, 1990, his body was taken to Windfields Farm in Canada for burial.
He sired two foals in his final crop, both colts sold at the Keeneland July sale as yearlings. The more prominent was Mrs. Penny’s chestnut son Northern Park, who was Northern Dancer’s final million-dollar baby. Sold for $2.8 million, he became a stakes winner in France. 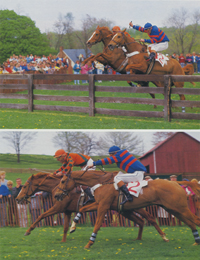 In one of the closest finishes in the race’s 91-year history, the Maryland Hunt Cup was decided by the length of Sugar Bee’s neck, after a stride-for-stride battle with Our Climber from the 17th fence to the finish of the 4-mile timber test. Only three of the nine starters completed the race.
Owned by Arthur (Nick) Arundel, Sugar Bee was trained and ridden by Charles C. Fenwick Jr., making his 14th Hunt Cup appearance as a jockey and winning it for the fifth time. Sugar Bee, a 9-year-old Virginia-bred gelding, started his career on the flat and set a 61/2-furlong track record at Charles Town at 3. A winner over hurdles midway through his career, the chestnut was switched to compete over timber and earned Timber Horse of the Year honors in 1985.
Sugar Bee’s Hunt Cup win came in his first attempt over the course. “He’d never jumped fences this size before and he didn’t like the ground,” said Fenwick. “But he handled the going well and he’s a good jumper.”

Bumping into an old friend, trainer Bill Donovan, at a car wash in Baltimore in January 1986, businessman and former Maryland Racing Commission member Don Levinson mentioned that if a good 2-year-old came along, he might be interested. Three months later, Donovan purchased a Florida-bred colt privately for $30,000 after seeing him at the Ocala Breeders juvenile sale, and Levinson became the owner of Lost Code.
In one year, Lost Code, a son of Codex, had earned $251,336 and was one of the hottest 3-year-olds in the country. However, because he was a late-developing colt, he was not nominated to the Triple Crown races. “But from now on, we’ve got him nominated to everything,” noted Levinson.
Lost Code went on to earn $2,085,396 from 27 starts, captured a dozen stakes, including the Grade 1 Arlington Classic and Oaklawn Handicap and four derbies (the Alabama, Illinois, St. Paul and Ohio), and had a successful stud career, siring 45 stakes winners.