Ocala Stud Farm founder Bruce S. Campbell took over the reins as president of the Maryland Horse Breeders Association.
The native Marylander intended to bring five mares he owned from Florida to Maryland. “I want them to foal in Maryland next spring so that I’ll have Maryland-breds which are eligible to compete in the Maryland Fund races,” he said.
Campbell’s advice to Maryland breeders was: “. . . concentrate first on acquiring good broodmares. An expensive mare is a cheap investment. We’ll need good stallions, too. But let’s get the mares first.” 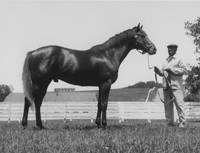 Leonard P. Sasso, who had a farm in Phoenixville, Pa., was transforming a dairy farm in Chesapeake City, Md., into a breeding farm. Major winner Globemaster, recently retired from the track due to an injury, resided in a 20-stall barn at Sasso’s Penowa Farm.
Final stud plans had not been announced for the son of *Heliopolis, but Sasso noted, “I am inclined to think that Globemaster will stay in Maryland.”
Trained by Tommy Kelly, Globemaster won or placed in 21 of 27 starts over three seasons while earning $355,423. He won four stakes, including the Arlington Classic in track record time and the Wood Memorial, and finished second in two classics: the Preakness (to Carry Back) and Belmont Stakes (to Sherluck).
Within a 10-mile radius of Penowa Farm were farms owned by Mrs. Richard C. duPont, Mrs. George P. Odom, Eugene Weymouth, W.C. Freeman and Bayard Sharp.
Wrote Maryland Horse editor Snowden Carter: “Undoubtedly, this is a portion of Maryland which is on the upswing as far as Thoroughbreds are concerned.”

The National Horse Sales Yearling auction was drawing many offerings to its July 12 venue, to be held at William duPont’s Fair Hill estate near Elkton, Md. Among the youngsters advertised was a black colt by the classically bred Sun Bahram consigned by Janon Fisher Jr. Out of War Admiral’s daughter Laelia, a half-sister to the dam of Preakness winner Bally Ache, the colt was a half-brother to recent Maryland Hunt Cup winner Mountain Dew.