Pioneer horsewoman Judy Johnson took over the operation of Blarney Farm in Woodstock, Md., with plans to use it as a training facility. Formerly owned by Rigan McKinney, the farm was purchased by Mr. and Mrs. H.L. Welsh, friends of Johnson’s who allowed her to lease the farm and its facilities.


The second woman ever to be licensed as a trainer in the U.S. (in 1935?–?Max Hirsch’s daughter Mary Hirsch was the first earlier that year), Johnson had grown up around horses in England. Her father was a well-known trainer in England, France and later the U.S.
Eight years after obtaining her trainer’s license, Johnson got a jockey’s license.
“It was during the war, and men were short in supply everywhere,” said Johnson. “I wrote to the Maryland Racing Commission and told them that since women were ferrying bombers, driving ambulances and doing riveting, I couldn’t see why women shouldn’t be used to help out on the shortage of jockeys. About three days after I mailed the letter, Walter Haight [racing editor for the Washington Post] called me up and told me the commission had approved my application. Then, in a few days, the license, signed by James F. Hayward, came in the mail.”
Johnson was still actively training, but noted: “That race track routine will wear you down when you’ve been with it as long as I have. I’m so very hopeful about this farm project.” 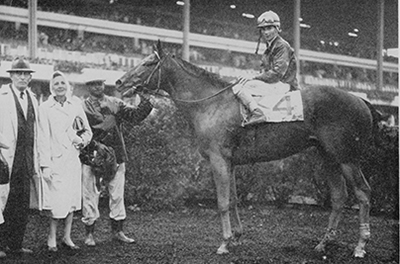 • Mr. and Mrs. B. Frank Christmas’ homebred Towson got his first stakes win by sweeping home by 5 lengths in Monmouth’s Salvator Mile over a sloppy track. The 4-year-old, trained by Frank Christmas, was a son of the Christmases’ stallion Cornwall, who stood at their Idle Miss Farm in Monkton.
The mating of Cornwall with the Pilate mare Saracen Miss had been wonderfully successful for the family. Saracen Miss’s three earlier foals by the stallion were all winners (including 23-time winner Towson Town).
The family continued to turn out runners for the Christmases, among them Towson’s full-sister Towson Town Gal, who was the dam of graded stakes winner Sailingon. Descendants of Christmas-bred daughters of Saracen Miss include champion female sprinter Dubai Majesty and Grade 1 winners Manistique, De Roche, Vilzak, Some Romance and Freedom Cry.