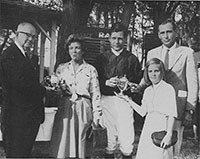 • D.M. (Mikey) Smithwick became the leading steeplechase trainer of all time when his runners surpassed the $1 million mark in career earnings midway through the season.

“Winning $1 million in purse money with steeplechase horses is at least 50 times harder than winning the same amount with a top-ranking stable of flat-race runners,” noted The Maryland Horse.

Smithwick surpassed George H. (Pete) Bostwick as the all-time leading trainer by earnings when he sent out Narcissus II to win the Manly Handicap, worth $2,540, at Fair Hill.

• Merryland Farm in Hydes, Md., was sold by Betty Shea to Mrs. Henry Obre. The new owner noted, “We plan to run Merryland Farm as a commercial breeding and boarding center. The new racing law in Maryland was certainly a strong factor in this decision.”

Mrs. Shea’s late husband, Danny Shea, had purchased the 250-acre property in 1939. Wrote former Maryland Horse Breeders Assocation field secretary Humphrey Finney: “After Danny moved to Merryland [the farm is named after the horse ‘Merryland’], he went to work. Like Betty [Danny’s widow, now Mrs. Thomas W. Miller] says, every cent Danny ever made out of horses went right back into that farm.

“He built it up month by month and year by year. When he died three years ago he had something in that farm that couldn’t have been duplicated by money. It was, quite literally, his life’s work.”

• Four new stallions were set to enter stud in Maryland in 1963, all stakes winners. The best known was the popular state-bred Yes You Will, who would stand at Worthington Farms in Glyndon. Others were Rejected (to Pistorio Farm in Ellicott City), John William (to Elray Farm in Kingsville) and Call the Witness. The latter, who most recently had defeated Kelso at equal weights at Atlantic City, would stand for his owner Mrs. Henry Obre at Merryland Farm.

All had modest stud careers, but Call the Witness, a son of Better Self, had the least opportunity. He died after only three seasons at stud. His was a case of what might have been–from 21 foals, he sired 19 starters (90 percent), 17 winners (90 percent of starters) and one stakes winner. That stakes winner, Yonnie Girl, was one of his seven daughters to produce foals. She was the dam of three stakes winners, including 1982 Travers Stakes-G1 victor Runaway Groom.