Four stallions joined the ranks of sires of Maryland Million Day winners, including Not For Love, whose daughters Shopping for Love and Blinded by Love won the Ladies and Distaff, respectively. The others were Compelling Sound, Deerhound and freshman sire Partner’s Hero.

But they had a long way to go to catch the program’s leader, Allen’s Prospect. His daughter Undercover’s victory in the Oaks marked win number 14 in Maryland Million’s 17-year history for Country Life Farm’s leading sire. 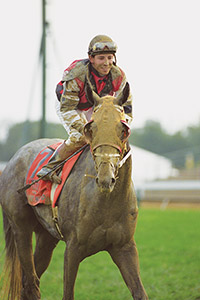 Four of the winners on the 10-race card were foaled outside Maryland, prompting Mid-Atlantic Thoroughbred editor Lucy Acton to write on that aspect of the program’s success.

“No matter where they are born, the resulting offspring [by a nominated stallion], if nominated, will forever be eligible to run in rich restricted races on Maryland Million Day.

“So when Maryland Million races are won by Pennsylvania-breds [as happened in the last two runnings of the Classic] or Kentucky-breds or New Jersey-breds, etc., it’s not a symptom of decline for Maryland’s breeding industry. Actually, it’s a sign of health.” 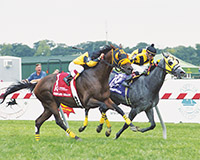 One of the most compelling winners on the Maryland Million Day card was Sondra and Howard Bender’s La Reine’s Terms, who won the Turf by a neck over defending champion Elberton. It was the fifth consecutive win for the son of Private Terms.

The Benders’ homebred had nearly been put down as a baby, after breaking his neck at his birthplace, Glade Valley Farms. Barely able to walk, with a head tilt and a drooping ear, and diagnosed with a crack in his vertebrae, the choice to put him down seemed the right thing to do. “But there was something about his eye that said he just didn’t want to give up,” said trainer/farm manager Larry Murray. “And every day, he got just that much better.”

La Reine’s Terms would go on to win the 2005 Maryland Million Turf at 10, his only race that season and the final start of his career. He remains the oldest winner of a Maryland Millon race in its 27-year history. The 11-time stakes winner, who earned $804,591 during his career, stands at stud at Glade Valley Farms in Frederick, Md.