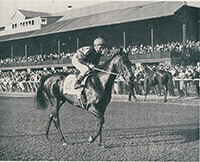 The Maryland-bred 2-year-old filly Abrogate extended her win streak to four with a victory in Keeneland’s Alcibiades Stakes.

The daughter of Reneged was bred by Harry Love and sold for $7,800 to trainer Bert Williams on behalf of Hugh Grant at Saratoga.

Abrogate, out of Contessa Reigh (by Count Fleet), nearly died of jaundice as a foal. Given transfusions and a diet of milk and eggs, the filly was tended to by Love, who huddled with her in the stall to keep her warm.

Abrogate won 14 races over four seasons, had nine stakes wins or placings and earned $116,774. Her most prolific descendant is her stakes-winning grandson Irish Tower, the sire of 33 stakes winners.

Tommy Lee, the 26-year-old Chinese-born rider who ranked among the nation’s top jockeys, purchased a 165-acre farm in Carroll County.

His wife, Ridgely, worked in every phase of the Finksburg, Md., farm, which was called Ridgelee (a combination of Mrs. Lee’s first name and Tommy’s surname).

Lee, who grew up in New Jersey, got his start as a rider when he met Billy Christmas at Atlantic City seven years earlier. Christmas gave him a job in his barn. “He was the gamest kid I ever saw,” said Christmas.