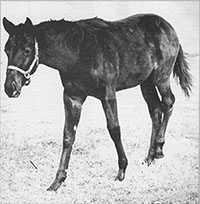 • Born in other states, the horses bred by legendary Hall of Fame trainer Hirsch Jacobs and his associate, Isidor Beiber, came to Stymie Manor Farm in Monkton, Md., as weanlings to be raised, broken and shipped to the track as 2-year-olds. Those who grew up at the 283-acre farm were an impressive lot, and included champion Hail to Reason and Affectionately, one of the top juvenile fillies of 1962.


The farm was run by Bill Albright, who was in charge of yearlings and race horses (those on the mend or being freshened), and Marion Robinson, overseeing the breeding stock and weanlings.
When asked who was the farm manager, Albright replied: “Neither of us. The farm manager is Hirsch Jacobs.” Although seldom at the farm, Jacobs made every important decision in running the operation.
The farm was named after Stymie, whom Jacobs claimed for $1,500 as a 2-year-old in 1943 and campaigned to win $918,485. While Stymie never set foot on the farm, many of his offspring did.
Working with a horse population of more than 75 prompted Albright to note: “We don’t have the spit and polish here that you see at Sagamore Farm. We’re not trying to run a showplace. The weanlings have never had a brush on them. And our yearlings haven’t been rubbed, either. But all our horses are good and fat, and we try to teach them nice manners.”
The 1962 weanlings included fillies?Admiring and Straight Deal. The former, by Hail to Reason out of Searching, was a stakes winner at 2, sold for a world record public auction price of $310,000 as a 4-year-old in 1966 to Charles Engelhard and Paul Mellon, and went on to produce Glowing Tribute, dam of seven stakes winners, including Mellon’s Kentucky Derby-G1 winner Sea Hero.
Straight Deal (Hail to Reason—No Fiddling) won 21 of 99 starts, earned $733,020, and was named champion handicap mare of 1967. She was also a stellar broodmare and is found in the pedigrees of dozens of graded stakes winners, including top sire Belong to Me.
• Renowned show rider Linky Smith shared his life as a horseman. “I’d say that I’ve sold more show horses and hunters than anybody in the state of Maryland,” said Smith, who no longer gave many riding lessons. “This year I’ve sold more than 60 horses. That’s a lot of buying and selling. It doesn’t give you much time for lessons.”
With the show market “very strong,” Smith remarked on his source: “To get my horses I’ve got to scout the racetracks. I look for size and bone. A big horse is worth a lot more than a little horse.”