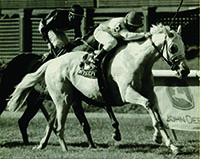 •The leading earner to represent the region in 2002 was With Anticipation, a winner of three consecutive Grade 1 races and runner-up in the Breeders’ Cup Turf-G1. Second in Eclipse Award balloting for the nation’s top turf horse, George Strawbridge’s homebred amassed $1,507,700 during his 7-year-old campaign and moved into third on the list of all-time Pennsylvania-bred earners, behind Japanese-based Nobo Jack and Breeders’ Cup Classic-G1 winner Alphabet Soup.


With Anticipation was one of five Pennsylvania-bred stakes winners bred by Strawbridge that year?–?four won in graded company. Joining the nearly white gelding in the graded ranks were juvenile filly Freedom’s Daughter, turf winner Roches-ter and hurdler Invest West.
Marylanders Sondra and Howard Bender topped the list for breeders in the region by number of state-bred stakes winners with nine?–?seven of whom, all trained by Larry Murray, campaigned for the couple.
•For the second year in a row, a Maryland-based rider took home an Eclipse Award as the nation’s top apprentice jockey.
Ryan Fogelsonger accepted for a 2002 season in which he won 267 races (a 22 percent winning rate) and had earnings of nearly $4.5 million. The 21-year-old joined eight other Maryland-based riders to win the award?–?a list that included Chris McCarron, Kent Desormeaux and 2001 winner Jeremy Rose.
Also taking home an Eclipse Award was leading owner Richard Englander, who campaigned extensively in the region. He led all owners with 278 wins and finished third behind Frank Stronach and The Thoroughbred Corp. with earnings of $7,515,562.
• The leading active steeplechase jockey called it quits, as 34-year-old Blythe Miller officially announced ?her retirement. Miller had ?202 career victories and rode the earners of more than ?$5 million.
Champion jockey of 1994 and 1995, Miller reflected on three of her best mounts?–?five-time Eclipse Award winner Lonesome Glory (17 of his 19 wins came with Miller), 2002 champion Flat Top (whom she rode just once) and It’s a Giggle (a Grade 1 winner in 2002).
“There were a lot of other ones that were really nice but I’d have to say those three were exceptional. Lonesome Glory was a combination of Flat Top and It’s a Giggle. He could run as fast as Flat Top and he could jump just as brilliantly as It’s a Giggle.”
Miller returned to the saddle briefly as an amateur in 2011, winning the Maryland Hunt Cup with Private Attack.
• Maryland-bred great Little Bold John succumbed following a bout of colic in January at his birthplace, Hal C.B. Clagett’s Weston Farm in Upper Marlboro, 21 years and two days after his birth. The earner of $1.9 million won 25 stakes, the most of any flat runner bred in the region.
Trained by Jerry Robb over a nine-year career, Little Bold John first raced for Clagett, but was sold midway through his 2-year-old season to neophyte owner John E. “Jack” Owens, who privately purchased his first racehorse for $30,000. Little Bold John continued to reward his breeder, however, with more than $100,000 from the Maryland-bred Fund.
Little Bold John retired from the track and, following the death of Owens, had an abbreviated stint as a pony for Robb. But when that career path ended, Robb sought a retirement home for the gelding, which Clagett was willing to offer. “Robb replied that he wouldn’t give the horse to me but would agree to a sale,” recalled Clagett. “The transaction was made later in my living room. The price was $1.”