• Brothers William “Billy” Meister and C.J. “Jay” Meister battled to the finish in the Maryland Hunt Cup, with Freeman’s Hill (Billy up) defeating Tom Bob (Ire) by a neck. “I’m really glad for Billy,” said Jay after the race, “but I could smell victory. I wanted that trophy so bad, and I thought I just might have it at the top of the stretch.” Freeman’s Hill was bred, owned and trained by Jill Fanning, who won the race three times as a trainer with her mother’s Cancottage earlier in the decade. 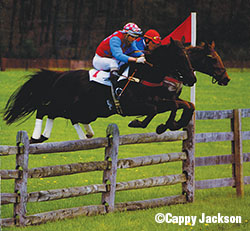 Cheered on throughout was 53-year-old York, Pa., grandfather Irv Naylor. “I’ve waited 36 years and six tries to start in this race,” said Naylor, who remounted after his Probon (Ire) crashed through the 21st fence and finished fourth. “It was a victory for me.”
• Bob and Lorraine Quinichett’s homebred filly Willa On the Move shipped to Keene-land and won the Grade 1 Ashland Stakes by a decisive 21?4 lengths. It was the sixth win in seven lifetime starts, and fifth stakes victory, for the 3-year-old daughter of Windfields Farm stallion Assert (Ire).
The Quinichetts made no secret that their filly was for sale, for the right price.
The Quinichetts did find a buyer by that August, selling Willa On the Move to Ron Lamarque, co-owner of that year’s Preakness/Belmont Stakes winner Risen Star. The price for the private transaction was not disclosed.
• The awards for champion Maryland-bred runners of 1987 were presented at Pimlico. Among the trophies handed out were those to Robert Meyerhoff for Horse of the Year and champion older horse Broad Brush. Three stallions were recognized as “stallion of the year”?–?Northern Dancer, The Minstrel and Rollicking. And breeder of the year was King T. Leatherbury, who also accepted the trophy for his champion 2-year-old filly Thirty Eight Go Go.