10 years ago
• At the midway point of the season, Pennsylvania-bred, European-based Russian Rhythm topped the World Thoroughbred Rankings, created to help determine the final fields for the Breeders’ Cup World Thoroughbred Championships.
The 3-year-old filly, bred by Betty Moran’s Brushwood Stable, won both her starts that season, the classic One Thousand Guineas Stakes-G1 at Newmarket and the Coronation Stakes-G1 at Royal Ascot. The Kingmambo filly was owned by Cheveley Park Stud and trained by Sir Michael Stoute. 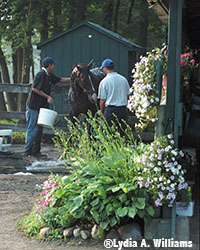 • “Before and after slot machines. Poverty and prosperity,” wrote Bill Finley as he explored the impact of slots on the backstretches of Delaware Park and Charles Town.
“In many ways, those two tracks, or any others that have been blessed with the windfalls from slot machines, are eager to forget a past that includes small purses and stables with cheap horses.
“But backstretch gentrification comes at a cost. Small-time trainers who were there for a track when times were bad may not necessarily be rewarded for their loyalty.”
Overall, the horsemen’s associations and racing secretaries had been able to handle the majority of trainers’ requests. But former Charles Town HBPA president Randy Funkhouser pointed out the reality: “With the purses available for these cheaper claiming races, it has given trainers an opportunity to upgrade their stock so that they can stay competitive. If they’re not able to do so or haven’t been able to find owners with the finances to help them, then they won’t stay competitive because these races are tougher to win all the time.
“It doesn’t happen overnight, but the downside is that some of the people have been forced out of the business. It can happen to someone who just isn’t a good businessman.”
• The Pennsylvania Senate approved enabling legislation to allow slot machines at the state’s race tracks. The measure was headed to the House, where, according to the Philadelphia Inquirer, it’s passage was uncertain.

• More than 100,000 fans braved the cold and rain at Belmont Park for a chance to witness history, but Funny Cide’s bid for the Triple Crown was thwarted by “the blue-blooded star with the world at his feet,” Juddmonte Farm’s Empire Maker. Bobby Frankel, trainer of the Belmont Stakes-G1 winner, never lost faith in his star. “If Funny Cide beats me now,” said Frankel the day before the classic, “all the more power to him. I’ll give him all the credit in the world. Hopefully he’s a great horse and everybody thinks he’s a great horse and we kick his ass. Simple as that, then we’ll be known as a great horse. . . in my heart I think we’re going to get him this time.”
• South Carolina was added to the coverage of Mid-Atlantic Thoroughbred. Editor Lucy Acton noted: “While South Carolina makes no pretense about being a center of Thoroughbred breeding?–?the state had 72 registered foals in 2001, amounting to 0.2 percent of the U.S. foal crop?–?it is, in some ways, a hub of Thoroughbred activity.
“No towns are more steeped in horse lore than Aiken and Camden, S.C., which over the years have beckoned numerous Hall of Fame horsemen and horses to their private training grounds.”