Notches Trace was one of the eight Maryland-bred champions of 1988–all conceived in Maryland. The daughter of Lord Gaylord was owned by Warren Rosenthal from Kentucky, trained in New York by Bruce Levine, and bred by King T. Leatherbury. 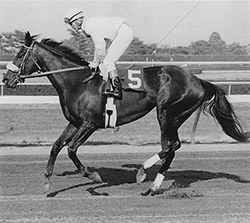 Two stakes wins her 5-year-old season, including the Grade 3 Betsy Ross Handicap at Garden State, earned her the title of champion older filly or mare. She was the second Maryland-bred champion produced by Leatherbury’s Dronette, joining Thirty Eight Go Go, the juvenile filly champion of 1987.

Dronette’s final two foals were the Thirty Eight Paces fillies Twofox (1993) and Endette (1994). The duo have produced two of Leatherbury’s best runners–Ben’s Cat and Ah Day, respectively, the earners of more than $2 million combined. Notches Trace also became a stakes producer, but her richest runner made less than $150,000. 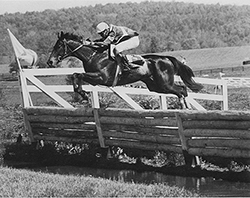 The top timber horse of 1988 was Von Csadek, the stable star of the Worrall family of Glyndon, Md.

“There was a lot of pressure prior to the Gold Cup in our sending forth a green rider on a first-year horse over 4 miles and 23 big fences,” said part-owner Margaret Worrall. The gelding, trained by Margaret’s husband Doug and ridden by their 16-year-old son Patrick, went on to win by an estimated 110 lengths, the greatest margin in the race’s 63-year history.

Former Pimlico vice-president Nathan Cohen died in December at 58. The son of former Pimlico president Herman Cohen had been active in the track’s day-to-day operations for nearly 30 years. He also enjoyed considerable success with his racing stable, having bred and raced the talented and durable gelding Mister Diz. He also bred top-class filly Caesar’s Wish.