Editor Humphrey S. Finney, whose duties included being Field Secretary of the Maryland Horse Breeders Association, kept a busy schedule while circulating among members and visiting farms in the area and beyond. A few days of his travels in January included:

January 7. Tonight I am in a quiet old home under the lee of the So’rland Mountain of New Jersey. . . this being the farm of Peter Vischer, editor of Horse and Horseman and our host of the night. We drove up from Towson (Md.) this afternoon to have a look at that brilliantly fast horse Case Ace at Joseph M. Roebling’s Harmony Hollow Stud, at Harbourton, N.J. The horse looked in top fettle, and so did all the rest of the stock, mares, newly imported fillies and yearlings. The Roebling Farm is a fine one with good paddocks, buildings and grass.

January 8. After inspecting the Vischer racing stable, this being a good looking Display filly out of Ornate by Gay Crusader purchased at Saratoga last summer from the Mereworth Stud, we headed for Pennsylvania and the Erdenheim Stud of George D. Widener. Arrived at Erdenheim, where are buried the great pair *Leamington and Maggie B.B., we found Mr. Joyner in his office which we soon left for the stable, having fortunately been joined by owner George Widener as we came to the doors. With trainers Bert Mulholland and John Creevy sending them out in quick succession we were shown the good 3-year-olds, Eight Thirty and Birch Rod, and a group of lovely 2-year-old fillies. . . Eight Thirty is a handsome horse of great quality. . . Birch Rod appears to be a colt of considerable promise also. . . but those fillies–what broodmares will come from that lot. So, after lunch at Media it was home to Towson, after a memorable visit.

“It was decided that no purse should be offered for the race–and rightly. Is not the honor of winning the race and its trophy sufficient?”
The conditions for the 46th running of the timber classic noted: “Owners acceptable to the Committee. Amateur riders holding certificates from the National Steeplechase and Hunt Association or those eligible for the same. Start and finish on the estate of Mr. J.W.Y. Martin, Worthington Valley. Same course as in recent years. Distance four miles.” 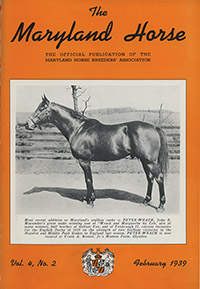 Travers Stakes-winning Petee-Wrack, a son of *Wrack and a half-brother to Gallant Fox, Fighting Fox and Foxbrough II, the favorite for that year’s English Derby, moved to Frank A. Bonsal Jr.’s Mantua Farm in Glyndon. The established sire of stakes winners, featured on the magazine’s cover, was standing for private contract.