50 years ago
Henry Contee Bowie Clagett Jr., better known as Hal C.B. Clagett, represented generations of Clagetts to reside at historic Weston farm in Upper Marlboro, Md. The attorney, Thoroughbred breeder and tobacco planter was also the author of HB 106, which established the Maryland-Bred Purse Fund. “He wrote the bill, and together with a hard-working committee of HBPA and MHBA members, fought doggedly for its passage,” noted the Maryland Horse. “Every man who breeds or races horses bred in Maryland owes Clagett and his co-workers a debt of gratitude, for the flower of their toil could provide some $400,000 in purses for Maryland-breds next year and during succeeding years.” 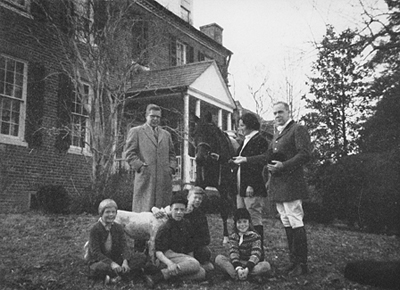 Clagett resided on a 470-acre tract of land which was part of an original grant from King Charles II to Capt. Thomas Clagett. Hal Clagett represented the ninth generation of the family to live in the house, built between 1690 and 1702.
The family’s roots, entwined by marriage with the Bowies, Ogles, Contees and Berrys, extended deep into the history of Prince Georges County. Robert Bowie, Hal Clagett’s great-great grandfather, was a founder of the Maryland Jockey Club in Annapolis in 1743. Samuel Ogle, first governor of Maryland and one-time owner of famed Belair Stud, was also related.

Halycon Stable celebrated the victory of homebred Declination in Bowie’s $10,000 Prince Georges Stakes, the first Maryland-bred stakes of the season.
Out of the Discovery mare Marcia P., Declination (by Rejected) was a half-brother to stakes winner Pajama Tops.
Halycon Stable, a partnership of Mr. and Mrs. Louis Pondfield and Mr. and Mrs. J. Fred Colwell (Pondfield was Pimlico’s executive director and Colwill a steward at all Maryland tracks), at one time also owned the Discovery mare My Recipe. She was later sold to Harry Isaacs, for whom she produced Intentionally.

Delaware Park’s 1962 meet was set to begin on May 28. The 54-day meet offered a record purse and stakes distribution of $2.1 million. The $150,000 Delaware Handicap, the richest race in the world for fillies and mares, headed a schedule of 14 stakes on the flat, four over jumps.