This Saturday is the 116th running of the Maryland Hunt Cup, the toughest timber race in the world. Mid-Atlantic Thoroughbred / Maryland Horse remembers. . . 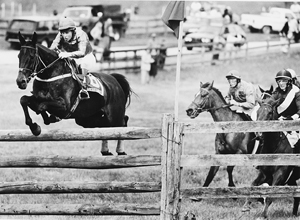 25 years Ago, in one of the closest finishes in the race’s 91-year history, the Maryland Hunt Cup was decided by the length of Sugar Bee’s neck, after a stride-for-stride battle with Our Climber from the 17th fence to the finish of the 4-mile timber test. Only three of the nine starters completed the race.
Owned by Arthur (Nick) Arundel, Sugar Bee was trained and ridden by Charles C. Fenwick Jr., making his 14th Hunt Cup appearance as a jockey and winning it for the fifth time. Sugar Bee, a 9-year-old Virginia-bred gelding, started his career on the flat and set a 6 1/2-furlong track record at Charles Town at 3. A winner over hurdles midway through his career, the chestnut was switched to compete over timber and earned Timber Horse of the Year honors in 1985. 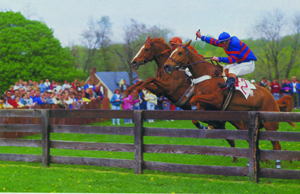 Sugar Bee’s Hunt Cup win came in his first attempt over the course. “He’d never jumped fences this size before and he didn’t like the ground,” said Fenwick. “But he handled the going well and he’s a good jumper.”

50 years Ago, Mountain Dew captured his first of three Maryland Hunt Cups for owner/breeder/trainer Janon Fisher Jr.The 7-year-old gelding  won with Janon Fisher III riding. It was the first time in the 66-year history of the race that the blue and gray colors of the Fisher family had triumphed in Maryland’s famous timber race. Fisher had trained, but didn’t own, three-time winner Blockade.
Mountain Dew, by *Hunters Moon IV, bowed a tendon in his only start on the flat as a 3-year-old. “I didn’t breed him to be a jumper,” said Fisher. “I bred him for a flat horse, and he had extreme speed.”
Describing the win, Fisher said, “This was the most exciting race I’ve ever watched. I bred the horse, and I bred the jockey. And I also bred the dam and granddam of the winner.”