Mrs. John D. Hertz’s Count Fleet towered over his competition in the spring of 1943.

“Count Fleet, seemingly on his way to join the turf greats of all time, romped to an easy victory in the historic Preakness as nearly 30,000 people roared their acclaim as the son of Reigh Count sped through the stretch. . .” wrote Don Reed in his coverage of the upended racing season in Maryland.

Bowie and Havre de Grace did not have spring meets due to wartime travel restrictions. The proceeds of the first five days of Pimlico’s 20-day meet went to the National War Fund – a total of $79,251.27 was presented.

Many racing pundits predicted poor attendance and slumping betting, but the Pimlico meet final figures showed the highest daily handle marks since before the depression in 1929.

“From all sections of the city and from all walks of life, patrons of the Thoroughbred found their way to the [Maryland] Jockey Club’s plant by street cars and buses, and there were comparatively few automobiles except on Preakness Day – thus indicating a real desire on the part of the public to cooperate with the gasoline and rubber edicts,” reported Reed. 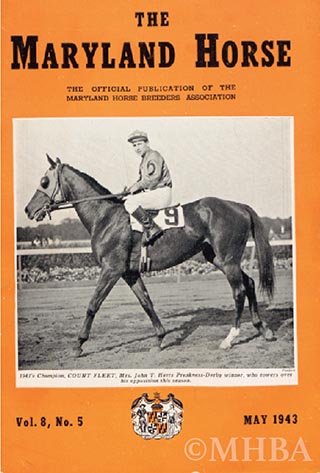