Dedication of Fasig-Tipton’s new Humphrey S. Finney sales pavilion in Saratoga brought together the Finney family and hundreds of horse people who gathered to honor the man everyone knew as “Finney.”

“Founder and first editor of The Maryland Horse, former president and still chairman of the Fasig-Tipton Company’s board of directors, Finney has been school teacher, horse show judge, stallion groom, farm manager, lecturer, author, husband, father and grandfather,” wrote Snowden Carter. “Showing stakes-class consistency, he has performed with distinction in his every role.”

Finney reminisced in a speech, starting with his first experiences at Saratoga in 1924. “As always, Finney had his listeners in the palm of his hand. They rose spontaneously and applauded the white-haired man with the half-moon glasses who had come to Saratoga as a groom,” reported Carter.

E.P. Taylor announced the appointment of Joe Thomas to the vice-president position of his Thoroughbred operations, placing him in charge of the Maryland and Canadian farms as well as all divisions of the Windfields racing stable.

Thomas remained in charge until his death in 1984 at age 59 after losing a two-month battle with cancer. Under his guidance, Windfields became an international powerhouse, represented by the likes of Nijinsky II, The Minstrel, Glorious Song and Devil’s Bag. Two days before Thomas’ death, two Windfields-bred colts – Secreto and El Gran Senor – finished one-two in the English Derby-G1.

Rigan McKinney, former Maryland breeder and director of the Maryland Horse Breeders Association, was inducted into Racing’s Hall of Fame. The nation’s five-time leading amateur steeplechase rider had been a force in Maryland for more than two decades before moving his breeding operation to Kentucky in 1962.

Maryland Governor Spiro T. Agnew made his first official visit to a horse show when attending the Maryland Pony Show at Timonium. “The [show] committee made full use of the Governor’s presence by turning the usually off-handed championship-awarding routine into a formal ceremony, complete with a parade of all the title-winners [champions in 16 divisions], appropriate music and an honor guard. . .” 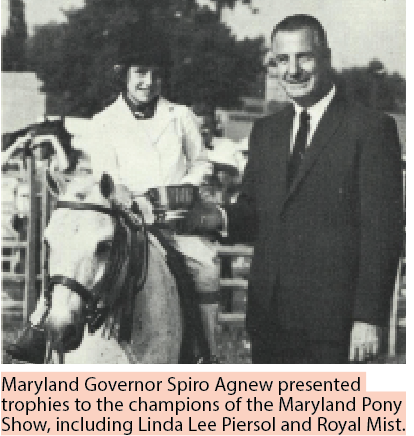