Breeders’ Cup Steeplechase heroes Blythe Miller and Lonesome Glory appeared on the cover. Miller was the first woman to take title to a Breeders’ Cup event. Lonesome Glory was trained by the rider’s father, F. Bruce Miller, in Cochranville, Pa., for owner Kay Jeffords. The duo soared to an 81⁄2-length victory at Belmont Park three weeks before the 10th annual Breeders’ Cup day at Santa Anita.

“It was a surprise,” said Blythe Miller, after defeating two-time Breeders’ Cup winner Highland Bud. “I didn’t expect Lonesome Glory to win as easily as he did.”

Through early December of Laurel Park’s 1993 fall meet, 29-year-old Graham Motion, Maryland’s “unofficial rookie trainer of the year,” was winning at a 41 percent clip, sending out the winners of 13 races from 32 starts, for four owners. “The future was brightening for an earnest young man whose future was clouded last February, the day Bernie Bond died,” noted Eclipse Award-winning writer Jack Mann. “Graham Motion, Bond’s assistant, had a tough – in two vivid senses of the word – act to follow. . .”

With a barn of mostly 2-year-olds, Motion moved the operation from Pimlico to Laurel and had horses for owners that included Bond clients Skip and Gertrude Leviton, and Eugene Ford. “My phone was ringing when I came back from Bernie’s funeral,” said Skip Leviton. “A dozen trainers wanted our horses. . . I had known this kid for a couple of years, and seen him work. He’s smart, capable, all business. And he’s so. . . hey, my wife agrees: If we had a son, we’d want him to be like Graham.”

The timber season wrapped up with Arcadia Stable’s 9-year-old Free Throw taking the division title with a 5-length score in the Pennsylvania Hunt Cup; the championship runner-up was Saluter, a 4-year-old son of Salutely trained and ridden by Jack Fisher to victory in all three of his timber starts, including the Virginia Hunt Cup.

Virginia-breds found international success that fall, with group wins in Canada, Italy and Germany. Keswick Stable’s homebred Husband captured the Rothman’s Ltd. International Stakes-G1 at Woodbine; Cielo Del Nord, bred by Sarah Louise Smith and Sheri L. Smith, won the Premio Guido Berardelli-G2 in Rome; and the Alexander Pereira-bred Komtur took the Prix Zino Davidoff-Preis der Deutschen Einheit-G3 in Hoppegarten. Home of the Free, a Paul Mellon homebred, added a Grade 3 win in the Laurel Dash at Laurel Park. All the stakes were on the turf. 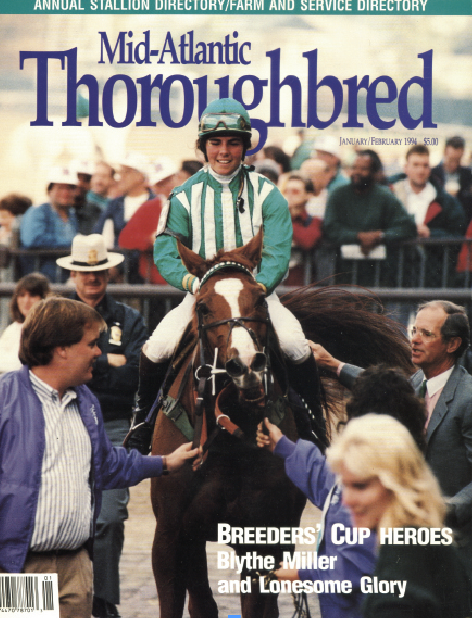