• Purses for the abbreviated Maryland spring meet to be held at Pimlico were announced and were higher than the previous year (from $20,000 to $22,000 per day), due in large part to the lineup of stakes offerings that included the Preakness (worth $50,000), Dixie and Chesapeake.

It was noted by columnist Don Reed that it would appear that for Maryland racing to continue to be an attraction in the future, the purse structure would need to remain high, due to competition from surrounding states. “For instance, Garden State Park, close enough to be called a neighbor since it’s just across the river from Philadelphia, which always has been a source of great support for Havre de Grace, has just announced raising its $10,000 Trenton Handicap to $50,000.
“Another item which Maryland operators are watching closely is the talk of a new track at Atlantic City, for this will mean added competition. The new group has been granted tentative dates for 1945 and strangely enough, these dates would conflict with Delaware Park’s normal schedule. So this may be the tipoff that an open scramble for dates is in the offing.”
• In a report by the American Trainers Association, the topic of lead ponies was addressed. 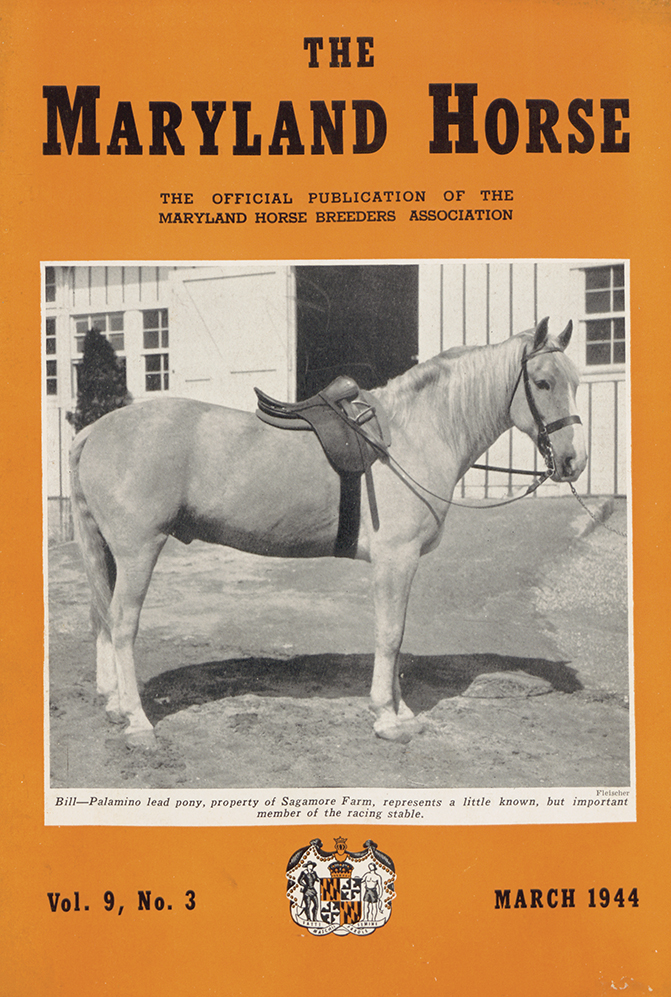 “Lead ponies are the unsung heroes of many training battles. It is a well-known fact that some horses race better when exercised with a lead pony to which they have become attached. All big stables keep one or more lead ponies, small stables often cannot afford them; but their value in the training routine is admitted.
“A good lead pony should be: quiet, temperate, intelligent, well-bitted and broken, sound, of medium size, active. If it is fast, young and handsome, so much the better. . .”
And one trainer’s viewpoint: “The late ‘Jimmy’ Rowe would never use an off-colored pony, as he thought that color, such as piebald, was upsetting emotionally to fillies.”
Sagamore Farm’s palamino lead pony Bill appeared on the cover of the magazine.