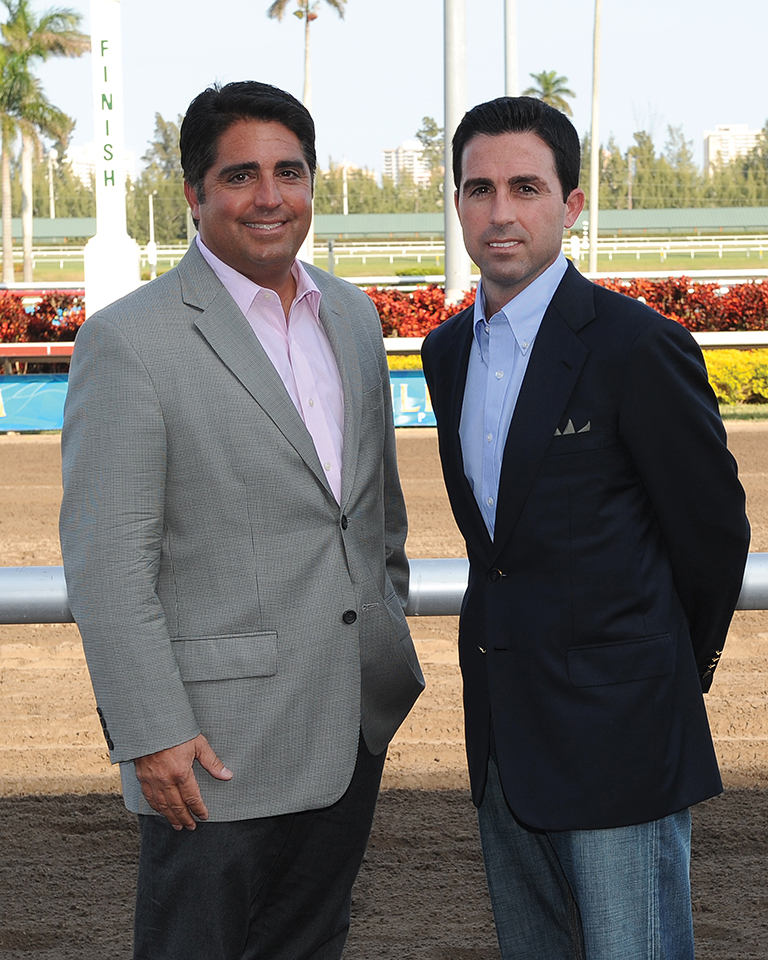 • The Saccos were a family of horsemen with deep roots New Jersey. Trainer Gregg Sacco was gearing up for the new season at Monmouth Park, and writer Ryan Goldberg noted the family tradition: “Sacco gets sentimental because Monmouth Park is home; more pointedly, his family history is inextricable from the place. Gregg, 43, and brother Rick, 42, are third-generation New Jersey horsemen. Their father and three of his brothers were trainers and breeders; one was a jockey. The Saccos have been at Monmouth since it opened in Oceanport in 1946 and have trained a winner every decade.”
The Sacco brothers had a successful collaboration with another well-established New Jersey family, the Brunettis. John Brunetti had hired Rick for a management job at Hialeah in the early 1990s and Rick eventually went on to manage Brunetti’s Red Oak Farm in Florida. Nearly half of Gregg’s stable of 50 horses were Red Oak runners.
The Saccos and Brunettis continue to have successful relationship – Gregg Sacco sent out the Red Oak Stable-bred Mind Control to win the Grade 1 Hopeful Stakes at Saratoga last summer and has the colt on the Triple Crown trail after a win in the Jerome Stakes on New Year’s Day.
• Legendary rider Louis “Paddy” Neilson III sat down with Joe Clancy to recall a career that included a record 21 Maryland Hunt Cup mounts and three victories over four decades.
“The Maryland Hunt Cup is very old, has a long and illustrious tradition,” said Neilson. “Everybody that’s had anything to do with it from a riding standpoint feels a very close personal relationship with that race. People have very clear memories of that race. Ask anyone who rode in it, and it’s a defining moment of their life. In my personal world, there’s not anything quite like it.”
Neilson won his first Hunt Cup with Haffaday in 1968; his second on Burnmac in 1974; and got his third aboard Uncle Merlin in 1989.
• Charles Town celebrated the landmark ride of Barbara Jo Rubin, who became the first female jockey to win a race against men at a nationally recognized race track 40 years earlier, on Feb. 22, 1969. The track honored Rubin, 60, with a dinner party and a race named in her honor. On hand were three of the jockeys who raced against her that evening: Phil Grove, Alan Williams and Dallas Hedge.
n Edward P. Evans’ promising 3-year-old Quality Road was quickly ascending the ranks of the best of his generation after taking Gulfstream Park’s Grade 2 Fountain of Youth in his stakes debut and only third start.
The son of Elusive Quality had been offered as a yearling at the Keeneland September sale, but failed to reach his reserve and was bought back by Evans for $110,000. The colt was not initially nominated to the Triple Crown on an oversight by his trainer, Jimmy Jerkens, and would be a late nominee.
• Breeder/owner Robert Meyerhoff and trainer Richard “Dickie” Small had a rising star on their hands as the 4-year-old Lemon Drop Kid colt Richard’s Kid got his fourth win in his last five starts in the John B. Campbell Handicap at Laurel, his stakes debut. The bay came from 18 lengths out of it to catch Bullsbay and win by a length.
It had taken Richard’s Kid time to develop. He didn’t get his first win until his fifth start, and only won two of his first nine attempts. He was consistent, however, finishing third or better in 10 of his 13 outings.