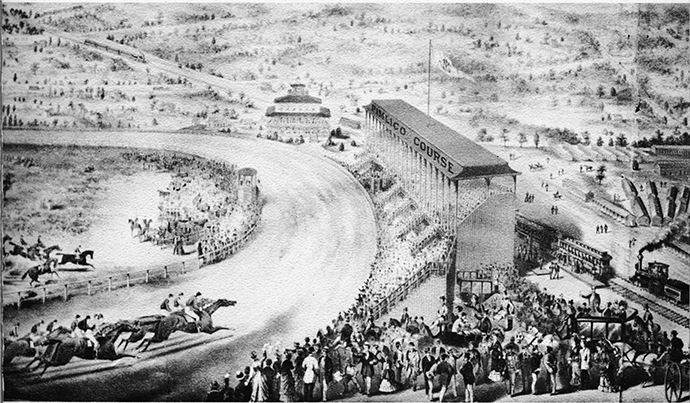 “Pimlico, Preakness look to ward off extinction. Again.” was the headline of a story by Pimlico historian Joe Kelly. “Nervous whispers and doomsday rumors have stoked the Baltimore landmark for 139 years, sometimes justifiably,” wrote Kelly. “But just as history cloaks Pimlico’s centerpiece, the Preakness Stakes, so it embraces Pimlico’s resiliency. Along with the glory, America’s second-oldest racetrack has had bitter doses of desolation, which at times threatened the very existence of the old grounds. It has survived wars, including the Spanish-American, fires, bankruptcies, management changes, closings, rehabs and the persistent natural erosion of time, while touching three centuries.”

• In his 2009 debut, two-time Eclipse Award-winning Maryland-bred Good Night Shirt, trained by Jack Fisher, ran his win streak to seven by adding the Carolina Cup-G2. The victory pushed Sonny and Ann Via’s 8-year-old chestnut son of Concern over the $1 million mark in earnings. One week earlier, Pennsylvania-bred Mixed Up won Aiken’s Imperial Cup to kick off his 10-year-old campaign. It was the first win for Bill Pape and Jonathan Sheppard’s Carnivalay gelding since August 2007.

• Edward Evans’ Quality Road solidified his standing as one of the best of his generation with a powerful performance in Gulfstream Park’s Florida Derby-G1, in which he set a track record of 1:47.72 for the 11⁄8 miles.