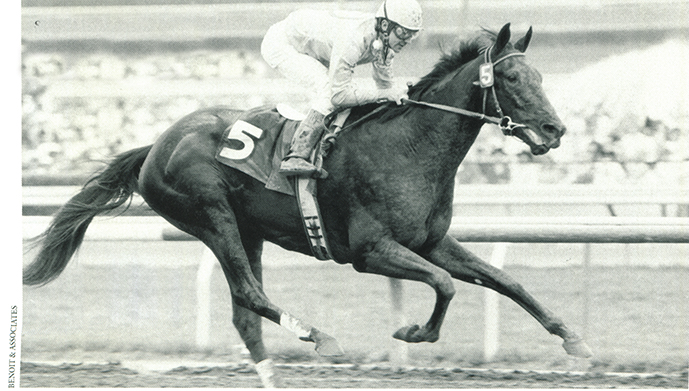 The list of 3-year-old classic contenders from the region continued to grow, with the addition of first time graded winners Concern and Soul of the Matter. Robert Meyerhoff’s Maryland-bred Concern won the Grade 2 Arkansas Derby in dramatic fashion, coming from 15 lengths back in last to get up and win by a neck, while Burt Bacharach’s West Virginia-bred Soul of the Matter, by Maryland sire Private Terms, captured the Grade 2 San Felipe Stakes.
Concern was not headed to Kentucky however. “The only way to go to the Derby is if you have a chance of winning,” said his trainer Richard W. Small, who had saddled Concern’s sire Broad Brush to finish third in the 1986 Kentucky Derby and Preakness.
Soul of the Matter, trained by Richard Mandella, started in the Derby and finished fifth, 61⁄2 lengths behind winner Go for Gin. Concern ran third behind Tabasco Cat and Go for Gin in the Preakness. By the time the two Mid-Atlantic-breds retired, they had earned a combined $5,382,168 and counted among their wins or placings the Breeders’ Cup Classic-G1 and Dubai World Cup.
• Vinnie and Suzanne Moscarelli, at whose Country Roads Farm near Charles Town, W.Va., Soul of the Matter was foaled and raised, discussed their connection to Burt Bacharach (they met the famous songwriter through his former business manager Alfred Braunstein, whom Vinnie knew while playing polo), how the farm in West Virginia came to be, and the host of good runners produced by Country Roads.
“Getting horses ready to go to California to run is our main objective,” noted Vinnie Moscarelli.
• Glowing Tribute, a cornerstone of Paul Mellon’s Rokeby Farm in Upperville, Va., was named 1993 Broodmare of the Year by the Kentucky Thoroughbred Owners and Breeders Association. She was the dam of 1993 Kentucky Derby-G1 winner Sea Hero, as well as stakes winners Hero’s Honor, Wild Applause, Glowing Honor and Seattle Glow, and her seven foals to race had earned in excess of $4.1 million.
• One day before he was scheduled to ship to Stone Farm in Kentucky to begin his stud career, Santa Anita Handicap-G1 winner Sir Beaufort died of a ruptured intestine. Bred by Buckland Farm in Virginia and campaigned by Pennsylvanian Victoria Calantoni, who purchased the gray son of Pleasant Colony for $7,000 at Fasig-Tipton Midlantic’s December sale as a weanling in 1987, Sir Beaufort earned $1,149,130 from 34 starts.
• Constance Capuano’s 10-time stakes winner Silver Tango was retired and bred to Unbridled. Trained throughout her career by Capuano’s son Gary, Silver Tango amassed $474,892 and was graded stakes-placed. Bred in Maryland by Jeanne F. Begg, she was a daughter of Silver Badge out of Royal Tango, by Princely Pleasure.
Silver Tango produced 13 foals, and of her eight winners, four were stakes horses, including stakes winners Dale’s Prospect and Our Commander. Her stakes-placed daughter Scarlet Tango is the dam of Grade 1 winners Tara’s Tango and Visionaire and Grade 3 winners Scarlet Strike and Madison’s Luna. The Unbridled offspring was the unraced Untangled, dam of five stakes performers, including Puerto Rican champion Full.