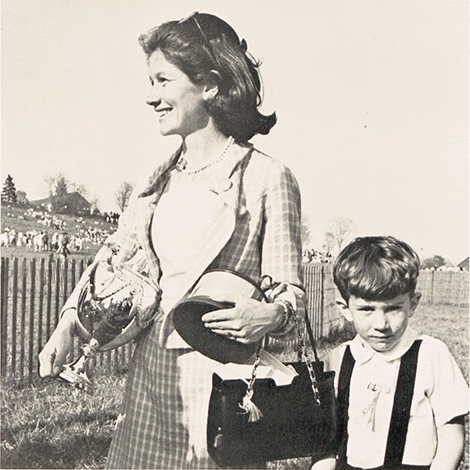 Dr. John Rush Street Fisher, 33-year-old nephew to famed horseman Janon Fisher Jr., guided his own Landing Party to victory in the Maryland Hunt Cup. It was the fourth time in the past eight years a Fisher won the world’s greatest timber race – Janon Fisher sent Mountain Dew out to victory in 1962, 1965 and 1967.
Both John and his wife Dolly came from families with long histories of involvement with the race – Dolly’s grandfather, John O’Donovan, rode in the 1895 renewal and owned three-time winner Garry Owen; her father owned Myrmidon, runner-up to Blockade in 1940; and her uncle Hugh O’Donovan rode in five Maryland Hunt Cups (including Myrmidon in 1940) and owned 1956 winner Lancrel.
John, a non-practicing veterinarian who at one time managed Allaire duPont’s Woodstock Farm in Chesapeake City, credited his wife for Landing Party’s success. “She’s galloped him, hunted him and worked with him day after day.”
The 7-year-old Landing Party didn’t make his first timber start until the previous October, but had hunted for two seasons. He was bred by Fendall Clagett, owner of Larking Hill Farm in Maryland.
The Fishers’ son Jack (a Hunt Cup-winning trainer and jockey in 1994) is now a 12-time champion steeplechase trainer.
• Hal C.B. Clagett, an Upper Marlboro attorney, was elected president of the Maryland Horse Breeders Association. He wasn’t the only member of the Clagett family to take on a prominent regional role – his brother, Fendall, was elected to a two-year term as president of the Horsemen’s Benevolent and Protective Association.
The new MHBA president – a Princeton graduate, Air Force colonel during World War II, an owner/breeder member of the association since 1951 and foxhunting enthusiast – was author of House Bill 106, which created the Maryland Fund program in 1962. In accepting the presidency, Clagett stated that he would “place emphasis during his administration on legislative matters pertaining to the Thoroughbred industry.”
• Record-breaking sales yearling Majestic Prince, trained by Hall of Fame rider John Longden and ridden by Hall of Famer Bill Hartack, remained undefeated when getting his eighth win after battling Paul Mellon’s Virginia-bred Arts and Letters to the wire in the Kentucky Derby.
An exchange was caught after the race between trainer and jockey: “John,” said Hartack, “I’m sure glad you weren’t fit enough to ride this horse yourself.”
“I’m thankful,” replied the 62-year-old trainer, “that I’ve been fit enough to gallop him.”
• Elliott Burch, trainer of Arts and Letters, judged the MHBA’s annual yearling show, selecting as champion a colt owned and bred by Mike Ford. The owner of 1966 Kentucky Derby and Preakness winner Kauai King, Ford was represented at the show by Dr. Raymond Murphy, operator of Bowling Brook Farm in Middleburg, Md., where Ford boarded his extensive broodmare band.
Burch was the first second-generation judge of the show – his father, Preston M. Burch, judged in 1946 and 1953.
• For the fourth year in a row Maryland ranked fourth in Thoroughbred foal production, with 1,224 registered foals of 1967, behind only Kentucky (3,723), California (3,229) and Florida (1,422). Maryland’s numbers increased 134 percent over 10 years. Virginia, ranked fifth with 953 foals, saw a 50 percent increase. Other regional states in the top 25 were New Jersey in 15th (314) and Pennsylvania, 21st (252). South Carolina had 165 foals; West Virginia, 61; North Carolina, 48; and Delaware, 6. 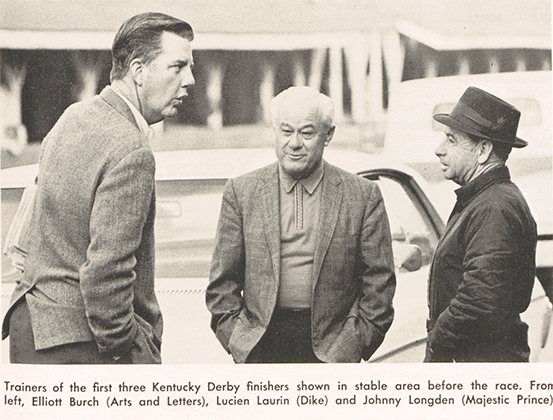