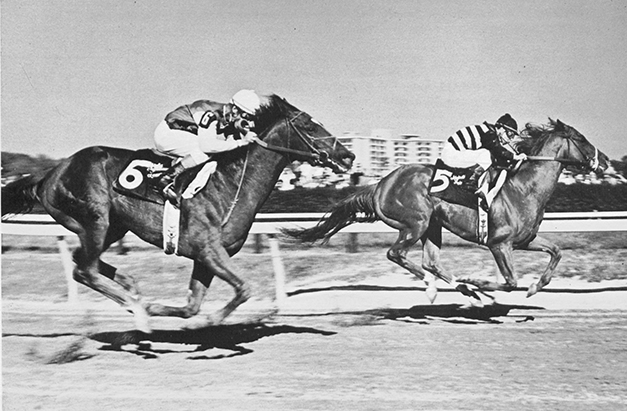 Majestic Prince remained undefeasted with his Preakness win over Arts and letters, although he had to survive a 26-minute objection.

It took 26 minutes for Kentucky Derby winner Majestic Prince to become the official winner of the Preakness, after a claim of interference for an incident at the start by Braulio Baeza aboard runner-up Arts and Letters was disallowed.
Trained by Hall of Fame rider John Longden and ridden by Hall of Famer Bill Hartack, Frank McMahon’s Majestic Prince remained undefeated in nine starts. Paul Mellon’s homebred Arts and Letters turned the tables on his archrival in the Belmont Stakes as the Virginia-bred won by 51⁄2 lengths, with Majestic Prince second in what would be his final start.
Arts and Letters went on to add the Jim Dandy, Travers, Woodward and Jockey Club Gold Cup and be named champion 3-year-old, handicap horse and Horse of the Year. Both colts were inducted into the Racing Hall of Fame.
• Philip S. Heisler, managing editor of the Baltimore Evening Sun, and his racing partner Virgil Christopher were the owners of Michigan Derby winner Berkley Prince, a Maryland-bred son of Country Life Farm stallion Rash Prince trained by 27-year-old J. William Boniface, the son of the Baltimore Sun’s racing editor Bill Boniface.
Having a stable for 10 years – nine with the late Dr. Webster Brown – and losing money only one of those years, Heisler said “We never tried to make a lot of money. Our objective was to have fun and not go broke. There was only once that we had more than one horse in training.” 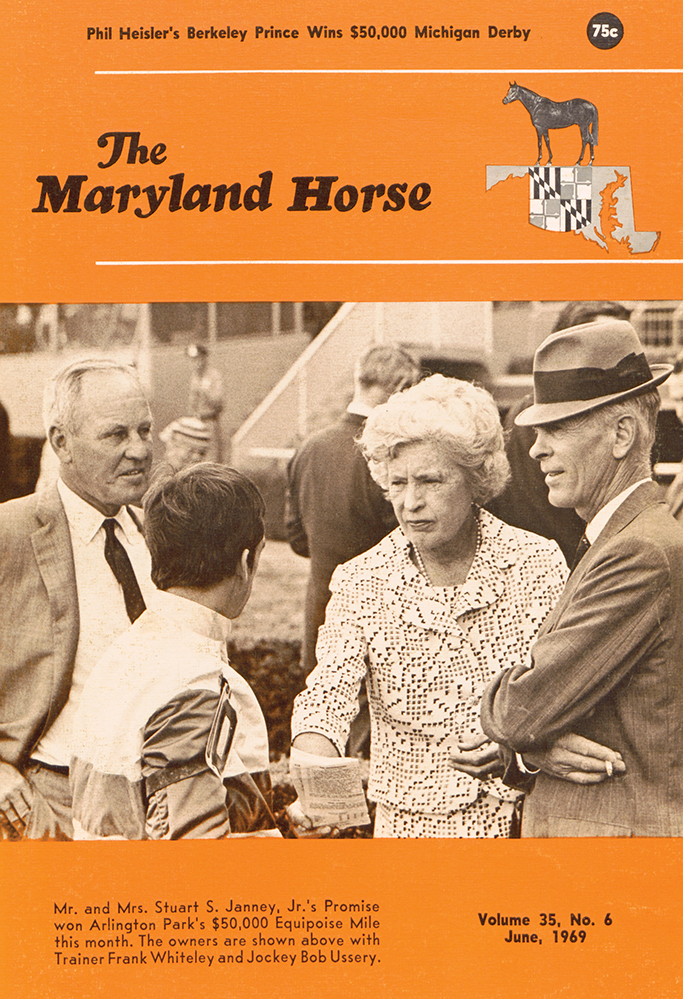 • Stuart and Barbara Janney had four horses in training, all homebreds, and all were winners that year – two juveniles, and 3-year-old stakes winners Tyrant and Promise, the latter victorious in Arlington Park’s Equipoise Mile. Born at the Janney’s Locust Hill Farm in Glyndon, Md., Promise had previously finished third in Aqueduct’s Metropolitan Mile behind Arts and Letters and Nodouble. The son of The Irishman out of the Dedicate mare Vowed was trained by Frank Whiteley, who had taken over the Janneys’ stable the previous year.
• The Fair Hill Races’ spring meet was an enormous success, as more than 10,000 spectators turned out for the opening Wednesday session, and more than 14,000 turned out three days later. The first day’s winners included Mrs. Jack S. Griswold’s Hasty Cobbler, trained by Jonathan Sheppard and ridden by Michael O’Brien, in the Kelso Steeplechase. On Saturday, the Foxcatcher Hounds Steeplechase was run over the new timber course and won by Island Stream, owned by G.T. Weymouth and trained by Dr. John R.S. Fisher. Island Stream was ridden by Doug Small Jr., subbing for Fisher, who was recovering from a broken collarbone when the same horse fell in the Radnor Hunt Cup.