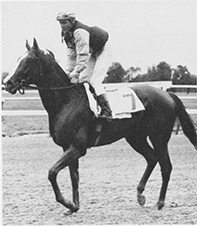 Three stakes wins over three consecutive Saturdays in June propelled the 3-year-old Maryland-bred colt North Flight to the upper echelon of his division. The son of Misty Flight won, in succession, Delaware Park’s Kent Stakes on the turf, Monmouth Park’s Long Branch over a sloppy track and Delaware Park’s Leonard Richards on the turf.
Trained by Eddie Anspach for Mr. and Mrs. William Mayer’s Compass Farm, the colt was foaled at Billy Christmas’ Deepwell Farm 10 days before he and his dam North Page were sent to the Maryland Spring Sale in Timonium. The Mayers, part owners of only one other horse at the time, purchased the mare and foal for $13,000. North Flight had already earned more than $130,000.
The backstory of North Page made the breeding game enticing – the mare was sold at auction in Virginia in 1963 for $500. Noted the buyer, E.W. Bowen: “Most of the horses sold at the Front Royal Livestock Sale go for dog meat. North Page was the highest-priced horse of the day. I just bought her to take a chance on. She had a real bad breeding record but she had the pedigree.” Two years later Bowen sold her privately to Jerry Kirk while carrying North Flight for $5,000.
North Flight would go on win six stakes, place in 17 others, including seconds in the United Nations and Man o’ War, and earn $332,313. He retired to stud in Virginia and eventually moved to Merryland Farm in Maryland. A stakes sire, he is found in the pedigree of Grade 1 winner Tenski. His daughter Mercy Flite was the dam of 14 winners from 16 starters, including stakes winners Honorable Flight and Mercy Me. 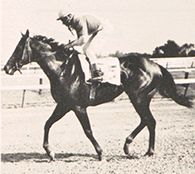 • Two-year-old Rollicking was undefeated in four starts, and throwing attention to his sire Rambunctious, who stood at Harold Herman’s Red Oak Farms in Poolesville, Md. With only three crops of racing age, Rambunctious had four stakes winners. Herman purchased the *Rasper II stallion from Mrs. Milton Erlanger in the fall of 1967, and Rambunctious had full books his first two breeding seasons at Red Oak. Asked what had the success of Rambunctious’ offspring done for Herman and his farm, the reply was “Gotten me awfully confused. . . I don’t know whether I should quit my job and devote full time to horses, or sell my horses and devote full time to my job.”