• Delaware Governor Jack Markell signed legislation in May that legalized sports betting and casino gaming at Delaware’s three race tracks: Delaware Park, and harness tracks Dover Downs and Harrington Raceway. Due to the federal legislation at the time, Delaware was the only state east of the Mississippi River that could legally accept sports bets. 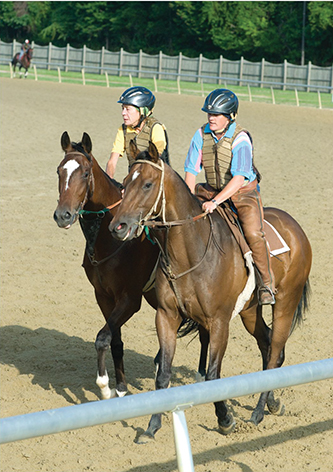 • Vinnie Perrone caught up with Gretchen Mobberley and her daughter, Bird, and provided details of the mother and daughter duo’s breeding and racing enterprise at Summer Hill Farm in West Friendship, Md., and at the track. The entertaining account included a look back to the start of the farm in the 1960s, and the loss of Gretchen’s late husband, Jack Mobberley. The Mobberleys had bred and raced Heros Reward until losing him in a claim in 2006. “This is a nice horse,” Gretchen told Bob Haynes after he made the claim. “I think he’ll do okay.” In the next two years, Heros Reward was a graded stakes winner, finished fifth in the inaugural Breeders’ Cup Turf Sprint, and was named Maryland-bred Horse of the Year.

• With news of Lil E. Tee’s death earlier in the year, Baltimore-based sports columnist and author John Eisenberg recalled the inspiration he found to write his first book, The Longest Shot: Lil E. Tee and the Kentucky Derby, about the first Pennsylvania-bred to win the Kentucky Derby. The book came out in 1996, four years after the colt’s classic win.
“I quickly realized his rise from obscurity was more improbable than anyone had imagined,” wrote Eisenberg. “It was all amazingly blue-collar stuff for a Derby winner.”
Penning his first book led to others about racing: Native Dancer: The Grey Ghost, Hero of a Golden Age, The Great Match Race: When North Met South in America’s First Sports Spectacle, and My Guy Barbaro: A Jockey’s Journey Through Love, Triumph and Heartbreak with America’s Favorite Horse in collaboration with jockey Edgar Prado.

• Mike Trombetta trainee Street Magician broke the track record for 51⁄2 furlongs winning the $100,000 Karl Boyes Memorial Northwestern PA Stakes at Presque Isle Downs. The graded stakes-winning 5-year-old shaved a fifth of a second off the previous mark, finishing in 1:02.24, while getting his fifth win in nine starts.