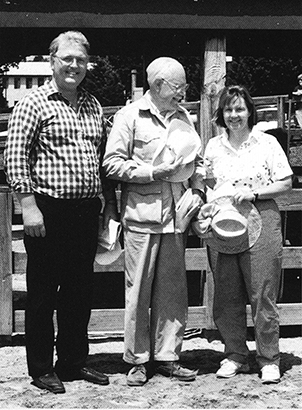 • Hickory Maryland-bred campaigner Gala Spinaway, the state-bred champion 3-year-old male of 1991, was retired from racing due to the diagnosis of a slight tear in the cartilage at the end of his left front cannon bone, following his second-place finish in the Harrison Johnson Stakes. The multiple graded stakes winner had made 41 starts in his career, winning or placing in 27 of them, with 11 stakes wins. Owner Leonard (Skip) Leviton said he intended to stand the 6-year-old at stud in 1995.
A photo of Gala Spinaway’s half-sister by Black Tie Affair (Ire) out of Spinnaker Sal, born at Glade Valley Farms in Frederick, Md., appeared in that month’s foal report.
Gala Spinaway was later featured in “Pensioners on Parade” in the magazine in November 2009, recalling the story of how the horse who became trainer Graham Motion’s first graded stakes winner returned to live out the rest of his life at Motion’s barn at Fair Hill in Elkton, Md. The well-known retiree was euthanized June 15 at age 31.
• Bill Mott, the nation’s leading trainer whose stable stars included Grade 1-winning Virginia-bred Paradise Creek, judged the 60th annual Maryland Horse Breeders Association Yearling Show at the Timonium Fairgrounds, inspecting 91 contestants. Mott chose Robert T. Manfuso’s homebred filly by Hail Emperor out of Litter, by Palace Music, as the grand champion.
• Southern Halo, a Maryland-bred son of former Maryland stallion Halo, was establishing himself as the dominant sire in South America. Standing in Argentina, he was already the sire of 15 stakes winners, seven Group 1, from his first two crops. The multiple Grade 1 stakes-placed runner was bred by E.P. Taylor at Windfields Farm.