• Peter Winants sat down with Janon Fisher Jr. and was told the fascinating and entertaining story of top-class steeplechaser Curator, White House curator Billy Elder and an increasingly expensive fireplace mantel. The story began in 1958 with Fisher swapping a Swashbuckler filly he bred named Ghost Dance, who failed to win on the flat, to Elder for the antique mantel Elder salvaged from an old Baltimore home about to be razed.
Elder hunted the mare and noted “she was the classiest animal” he had ever owned. When Elder was hired by Jacqueline Kennedy as Curator of the White House, he gave the mare to his father, William Elder Sr. The senior Elder didn’t want to hunt her, and after discussing it with Fisher, it was decided to breed the 8-year-old mare to nearby Assemblyman. The resulting colt, Ghost Dance’s first foal, was named Curator “after Billy, of course.”
Curator won two steeplechase stakes in course-record time at Belmont Park in 1969 and placed in six more to be named that year’s Maryland-bred champion steeplechaser. He retired with earnings of $76,889. 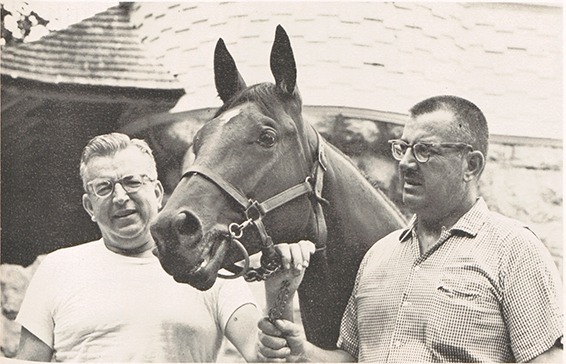 • Hopkins brothers Miles and Frank moved their families – Miles’ wife Fran and children Miles Jr. and Carol Frances, and Frank’s wife Martha and children Frank Jr., Mike, Boo and Amy – from Baltimore to the country and within four years set up a Thoroughbred breeding operation in Harford County. Frank joked when asked how that came about: “Beats me. We came out here to raise kids and a little hell from time to time. What did we end up with? Racehorses!”
The Hopkinses purchased the historic Winstone farm in Darlington. Frank, manager of the U.S. Department of Commerce Field Office in Baltimore, and Miles, director of purchasing and traffic with the Glidden-Durkee Division of SCM, plunged into learning about farm management and breeding and raising Thoroughbreds. Through an association with brothers Joe and John Pons, also Harford County residents, they purchased their first horses. “Right there,” said Frank, “we eliminated an obstacle many people face in starting a Thoroughbred operation – knowing what to buy and when to buy it.”
• Edward S. Voss died at his Atlanta Hall Farm in Monkton, Md., at age 86. He was entering his 31st year as Master of Fox Hounds for the Elkridge-Harford Hunt Club, the longest continuous mastership in the U.S. A frequent rider in steeplechase and point-to-point races, he rode his last race at age 64 at the Elkridge-Harford Point-to-Point at Atlanta Hall. He was also a noted artist, working with watercolors and oils and often painting Harford County hunting scenes.
• Maryland-bred Rollicking was voted the nation’s leading 2-year-old in July and August in the Thoroughbred Racing Association’s monthly poll. The son of Rambunctious was bred by Mrs. Robert Leonard at Glade Valley Farms near Frederick and leased to J.I.B. Farm.