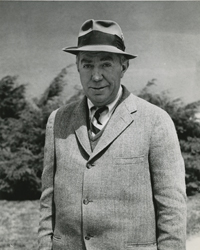 • Maryland Horse Breeders Association president Frank A. Bonsal declined a second term, much to the regret of the organization’s general manager Snowden Carter. “Under his leadership, the MHBA has accomplished more during the past 12 months than in any other single year of its history.” In addition to the passage of House Bill 106, Carter noted the importance of Bonsal’s influence to have the HBPA and MHBA join forces to work together.
Bonsal, trainer of the likes of Mongo, Saratoga and Pilaster, ranked among the leading trainers in the nation throughout the 1940s and ’50s. The Maryland Horse’s Joe Hickey provided an in-depth profile on the horseman known as Downey:
“Downey’s trademarks are an impish grin and a weathered felt hat that has a sat-on look. Numerous spills during his years in the saddle left him with a slight stoop and the nickname ‘Downey.’ One might describe his frame as ‘wirey,’ for it is just that–wired together.
“In both tail male and tail female he stems from old, horsewise Maryland families.”
Among Downey Bonsal’s many accomplishments, he won the Maryland Hunt Cup twice aboard Bon Master, and rode in the Grand National at Aintree. As a trainer, his flat runners had earned in excess of $4 million.
• Janon Fisher Jr.’s homebred 7-year-old gelding Mountain Dew won the Maryland Hunt Cup with Janon Fisher III riding. It was the first time in the 66-year history of the race that the blue and gray colors of the Fisher family had triumphed in Maryland’s famous timber race. Fisher had trained, but didn’t own, three-time winner Blockade
Mountain Dew, by *Hunters Moon IV, bowed a tendon in his only start on the flat as a 3-year-old. “I didn’t breed him to be a jumper,” said Fisher. “I bred him for a flat horse, and he had extreme speed.”
Describing the win, Fisher said, “This was the most exciting race I’ve ever watched. I bred the horse, and I bred the jockey. And I also bred the dam and granddam of the winner.”