Bo’s a Ten and Magic Weisner

Carl “Bunny” Meister Jr. and his wife, Linda, received an offer they couldn’t refuse. The buyers of their 133-acre Tarad Hill Farm in West Chester, Pa., planned to build a new home on the property, and the Meisters were welcome to stay in the farmhouse Bunny has occupied since the 1960s. But the change in ownership dictated that the Meisters rehome their horses, several of whom have lived at Tarad Hill for years. 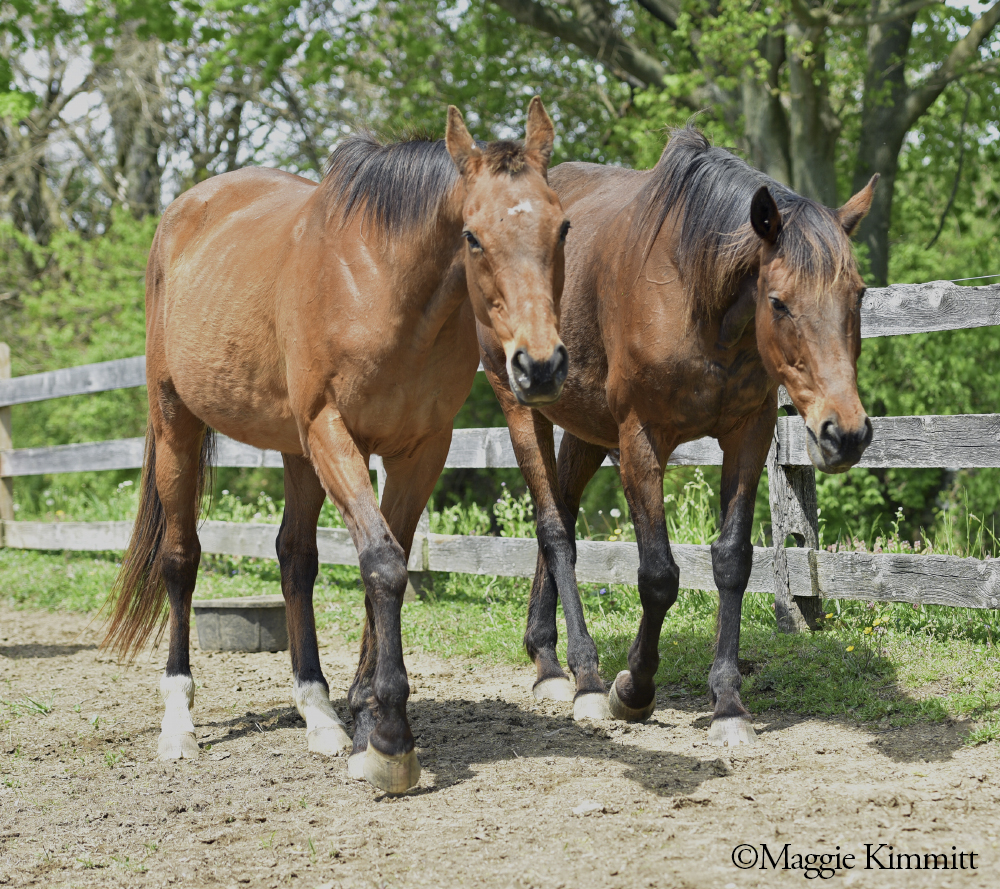 Their first concern was for a 20-year-old mare and the 21-year-old gelding from whom she is now inseparable.

Bunny might see a plain brown wrapper, but Bo’s pasturemate Magic Weisner sees the sun, moon and stars. Bred, owned and trained by Linda’s sister, the late Nancy Alberts, Magic Weisner (Pensioner on Parade, July 2009) became a Maryland legend when he finished second to War Emblem in the 2002 Preakness Stakes-G1 at 46-1. The Maryland-bred son of Maryland-bred champion Ameri Valay and the Bold Forbes mare Jazema won the Maryland Juvenile Championship in 2001 and three stakes at Laurel Park leading up to the 2002 Triple Crown: the Goss L. Stryker, Deputed Testamony and Private Terms.

After Magic Weisner finished second in Pimlico’s Federico Tesio, Alberts gave the local hero a shot at the Preakness. Barreling down the stretch on the wrong lead, Magic Weisner finished three-quarters of a length behind Kentucky Derby-G1 winner War Emblem. Behind them in the field of 13 came Medaglia d’Oro and Harlan’s Holiday. The near-miss brought down the house. Alberts nearly overshadowed winning trainer Bob Baffert.

Magic Weisner finished fourth in the Belmont Stakes won by 70-1 longshot Sarava before heading to Thistledown for the Ohio Derby-G2. Magic Weisner won by a neck over Wiseman’s Ferry. Two weeks later he met War Emblem once more, at Monmouth in the Haskell Invitational-G1, again finishing second.
Alberts planned to run in the Pennsylvania Derby a month later, but she noticed some issues while training. A trip to New Bolton Center a few days before the race confirmed her suspicions – West Nile Virus.

“She did try to bring him back. He worked well, but the problem was coming out of the gate,” Bunny said. “I think he had a little residue in one of the nerves in his hind end. When he got here to our farm, my wife wanted me to get on him. So I did, and I knew he wasn’t right behind. She decided to take him over to Vince Dugan, who got on him once and said, ‘Take him home and just let him be a horse.’ He’s just been here enjoying life ever since.”

“I really just wanted to trail ride, so that was when I moved her over to Bunny’s farm,” Groff said. “And she was phenomenal. But then we put her out in the field with Magic. And I’ve never experienced this with a horse before, but they just became inseparable. It was the weirdest thing; like he saw her, she saw him, and it was like they had been something in a previous life.” Bo’s a Ten’s previous life included four years on the racetrack and three foals. Bred in Florida by Bruce Moriarty, she is by Patton from the Bold Ruckus mare Bodust. Paul Mulvena and John Worsley purchased the bay filly for $1,800 at Fasig-Tipton Midlantic’s fall yearling sale in 2001.

Trained by Worsley, she never raced outside the Mid-Atlantic, earning checks in maiden, claiming and starter races at Delaware Park, Atlantic City, Penn National, Philadelpha Park and Pimlico. She broke her maiden in her 13th start and went to post 19 times as a 3-year-old in 2003. After four seasons, she retired with stats of 43-3-3-8 and $40,091 earned.

Purchased privately by Marie Morrison, who breeds and raises a few foals with her husband each year at Dellersbeck Farm in Coatesville, Pa., Bo’s a Ten became a broodmare. Her three foals included two winners, but she’s remembered more for her disposition than her productivity.

“Bo was such a sweet mare as were all her foals,” Morrison said. “She did have a fourth foal but unfortunately it was born dead. I still remember all the trouble my husband and I had that night pulling it out to save Bo.” Morrison did not breed the mare again, choosing instead to find her a good home.

“She was a Craigslist posting,” Groff said. “I went out to see her and immediately fell in love. I rode her and we just completely clicked. I don’t even think she was $500 – it was a nominal fee, more to ensure she was going to a good home. So I ended up basically adopting her.”

Groff and her trainer, Rae Guthrie, had the mare going well, even jumping some 2-foot-6 to 2-foot-9 courses. But Groff, then in her 40s, had no real interest in competition, preferring to hack out on trails. She learned that the Meisters’ farm afforded plenty of opportunity, so she relocated her mare. “I’d go to tack her up and take her on a ride with some of the other girls, and I could tell she was not happy about leaving Magic,” Groff said. “So I ended up getting a second horse and riding him.”

When Bunny Meister started thinking about selling the property, Magic Weisner’s future always came up – as did that of Bo’s a Ten.

“Well, yeah,” Groff replied. “I certainly don’t want them to not be together.”

Bunny wondered if Old Friends, the Thoroughbred retirement farm run by Michael Blowen in Kentucky, would be a suitable home for Magic Weisner.

“We told a friend of ours who was in a lot of Cot Campbell’s partnerships, and he had met Michael Blowen a few times,” Bunny said. “So somehow just within the conversation, our friend picked up the ball and called Michael up, and he was very enthusiastic.”

Linda Meister followed up with her own call to Blowen. After explaining the situation with Magic and Bo, Blowen responded with, “Send them both down.” Their future decided, Bo’s a Ten and Magic Weisner will ship to Kentucky this summer. Hollywood couldn’t have scripted a happier ending.

“We’ve got them in the right place,” Bunny Meister smiled.