Details
From May 2012 Issue
Written by Maggie Kimmitt

For nearly a decade in this space, Mid-Atlantic Thoroughbred has featured an update on a retired Thoroughbred. The horses have ranged in age, accomplishments and notoriety, but each subject has shared a common thread–all have been beloved by their connections. We’ve showcased former claimers who now spend their days packing kids around rings at horse shows; pensioned broodmares who ease through their golden years babysitting youngsters; and–as we do this month–even a few Eclipse Award winners. 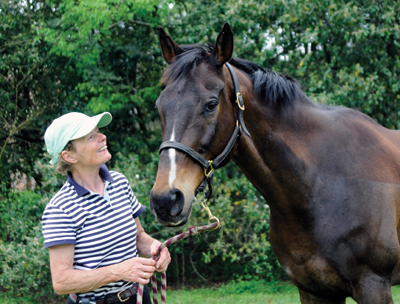 Because these horses are so special to the people who bred, raised, raced and now look after them, they’ve become special beyond mere statistics. Some make an immediate impression, leave an impact. They tell their stories. The magazine just provides the space. Flat Top was one such example. Spending time with him and his trainer/best friend Janet Elliot in Camden, S.C., on March 22 was a privilege. A month later, the gelding succumbed to colic at 19, making that privilege all the more special. To Elliot and everyone who knew and loved Flat Top, we offer our condolences. What a star.

It’s mid-morning at Hall of Fame trainer Janet Elliot’s Camden, S.C., barn, and the shedrow is buzzing. Late March feels more like early July on this day, and Elliot pauses just long enough to scrutinize as a groom hoses off a tall bay, back from the last set to gallop at Springdale Race Course. Nearby another groom cleans tack, while yet another rakes. A wayward Jack Russell Terrier dives into mischief a few feet away. Missing no detail, Elliot addresses all three before turning to offer a greeting.

“All right then, come see Flat Top.”
To the casual observer, stable pony Flat Top is indistinguishable from Elliot’s horses in training. At 19, he’s dappled, he’s fit, he looks as if Elliot could put him on the van and send him racing. “He went out with three sets this morning; he worked hard today,” she said. “Didn’t you old man? He’s a character.”

No one knows that better than Elliot. Flat Top was bred by Landon Knight in Kentucky and began his career on the flat for Ken and Sarah Ramsey as a 3-year-old in 1996. Flat Top showed next to nothing in his three starts, earning chart comments like “no rally” and “no speed, outrun,” for trainer Niall O’Callaghan.

The form–or lack thereof–prompted the Ramseys to sell Flat Top for $5,000 as a steeplechase prospect. Toward the end of his jockey career, Jeff Teter made the purchase and less than five months later the son of Alleged won a 3-year-old maiden hurdle at the Virginia Fall Races in Middleburg. Sold to Nancy Gerry and moved to Elliot’s shedrow after the victory, Flat Top added the Raymond G. Woolfe Memorial Hurdle Stakes at Camden to close his rookie season.

A stakes winner at 4, Flat Top blossomed at 5, capturing Colonial Downs’ Zeke Ferguson Memorial-NSA2 and Far Hills’ Breeders’ Cup Grand National-NSA1 in October; and Camden’s famed Colonial Cup-NSA1 in November. That record was shiny enough to snare him the Eclipse Award as champion steeplechaser of 1998.

But the dark bay gelding (out of The Minstrel’s daughter Lady of the Light) was not without his foibles.

“He was a terrible stall walker and a very, very bad bleeder,” Elliot said. “Definitely the worst bleeder I ever trained. And he’s claustrophobic in a stall. When we went racing or anything like that, he either had to stay in the horse van or a paddock. He was a high-maintenance horse. There were some leg issues–he had a fractured splint bone, a tendon, a suspensory–various little niggly things that bothered him along the way. ” 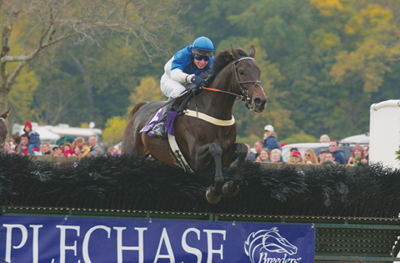 Flat Top did not run at all in 1999 and only once in 2000, winning Keeneland’s Grade 1 Royal Chase. On the shelf again until 2002, he made five starts, all in Grade 1 stakes. Duplicating his 1998 record, he triumphed again at Far Hills and Camden that fall, garnering Gerry another Eclipse trophy.

Sidelined again until October 2004, Flat Top reappeared at Far Hills for one final attempt at the Breeders’ Cup Steeplechase.

“I don’t think he was quite fit enough, and Robert Massey pulled him up,” Elliot said.

Game, set and match, Flat Top was a retiree, and Elliot became his new owner. Two Eclipse Awards, 21 starts with a 9-2-3 record, and $592,306 banked, he headed home to the trainer’s Pennsylvania farm.

“Mrs. Gerry had to get out of the horse business because her husband had died and her financial advisor said that she needed to start cutting back, so she owned him and she owned half of two other horses that I trained; actually that I bred. So I ended up getting them all back. There was talk about him going to somebody in Aiken, and I didn’t want that to happen. I thought ‘You know, nobody knows this horse better than me.’ ”

Flat Top proved himself as much of an asset off track as on, jumping into a role as Elliot’s stable pony and racehorse companion. He made as many trips to the paddock in retirement as he did during his racing career. Probably more.

“Last winter I left him up north for a bit and then I needed him down here, so he came down,” Elliot said. “This year I brought him down right away because I knew I needed him. I have others I could have ponied off of, but he’s the best. Thanks to him, several horses have made it to the races that probably wouldn’t have made it, because he can go out there and gallop with the best of them. He had a work about a month ago with another horse because I had nothing else to work him with. Just an open gallop, probably finishing up in a little bit of a two-minute lick. He goes out there every day and jogs, or jogs and gallops. He’ll go out there and gallop 2 miles now and not be blowing. He can get competitive.”

Flat Top munched hay as Elliot spoke. Watching her painstakingly hand-pick shavings out of her horse’s tail, it’s easy to forget that images of both adorn the walls at the National Steeplechase Museum, across the field on the Springdale property. It’s a sight seen in any barn on any given day.

But nothing about Flat Top–or Elliot, come to that–is mundane.

“He’ll be fine in a stall at the farm in Pennsylvania, because he’s got a window to look out and he’s got bars between all the stalls around him. He’s fine, and he doesn’t feel claustrophobic. I mean right now, he’s happy in this pen we’ve made for him here. If you put him in a stall, he’d be flying around in small circles. But he gets fed up with being in here, too. He’s eating his lunch right now, so he’s happy. But in a bit now he’ll have had enough and he’ll be talking to us.”

As if on cue, Flat Top took a few steps forward and pushed the door open.

“Let me get your halter and we’ll get your picture taken,” Elliot said to him.

It’s said that the good ones know they’re good; that they have an air about them. With imperceptibly subtle cues from Elliot, Flat Top stood himself up and gazed off into the distance, looking every inch a Richard Stone Reeves painting. Elliot’s pride was written all over her face.

“This is the most talented horse I ever trained–he’s a seriously good horse,” she said. “And I’ve had some very good ones, but he was the best.”