In the show ring, he is Ferdinand The Bull. At home, he is Ferdinand (never Ferd or Fred). To The Jockey Club, he’s Cugino. By any name, he has been the ultimate partner and family horse for Megan Childs Campbell for 15 years. 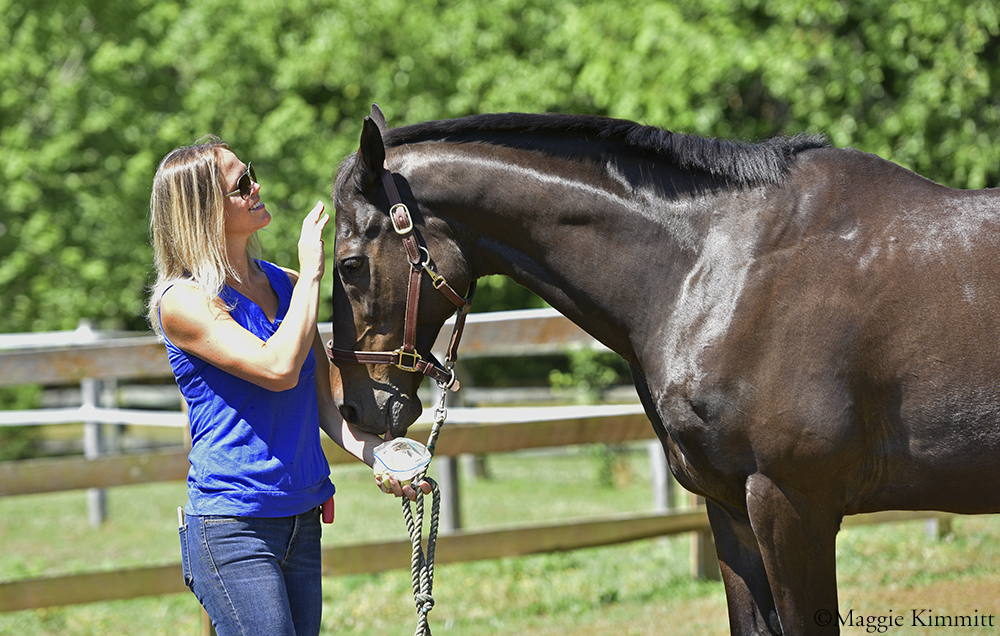 She chose the nickname for the dark bay gelding by Cozzene out of the Kris S. mare High Hatted shortly after meeting him at Mid-Atlantic Horse Rescue in 2005. Bred in Kentucky by CandyLand Farm, Cugino went through the sales ring twice: at Keeneland November in 2000, and Keeneland September in 2001. He returned to CandyLand on both occasions, a $55,000 buy-back as a weanling and a $62,000 RNA as a yearling.

Cugino went into training but never made it to the races, instead adopted out by CandyLand for a different career. When that situation proved short-lived, the horse returned again. Farm manager Mike Palmer then reached out to MAHR co-founder and president Beverly Strauss.

“Before the horse left the first time, Mike Palmer’s daughter had been jumping him,” Strauss said. “When he came back, he wouldn’t go. I sat on him for how many days waiting him out. He would just pin his ears and refuse to move. When Megan came, I told her she would basically be getting a pony ride on a lead line in order for him to move. She adopted him in spite of that and in a very short time had him walking, trotting and cantering nicely. I asked her what did it – a cattle prod or a carrot on a stick? She laughed and said he just didn’t like to be kicked.”

A lifelong horsewoman, Megan Childs was at that time a recent graduate of Salisbury University. The Annapolis, Md., native grew up riding, showing and preparing young horses for the racetrack. While in college, she continued to ride, train and teach lessons. Upon graduation, she returned to the Annapolis area to begin her professional career in software development. She also decided it was time to have another horse. Searching online, she saw Cugino on the MAHR website.

“Bev had not had the horse terribly long,” Childs said. “The breeder said they didn’t understand what happened because he was the sweetest baby and the easiest to handle. But it just didn’t work out with the new owner, and he came back difficult to ride. He was advertised by Bev as a special-needs case. They just had one photo of his head on the website and the ad said, ‘Contact for more information’ as opposed to the other horses, which are usually under-saddle photos.”

The listing mentioned that Cugino would require an experienced trainer/rider. Megan, 22, dove in.

Megan’s tryout was, as Strauss said, little more than sitting on the gelding’s back. He swished his tail and refused to move when urged, “but never did anything ridiculous. He’d act like a big bad guy but wasn’t, and I felt like I could deal with him. And he was absolutely stunning. So I said right there I’d take him.”

Megan’s favorite children’s book came to mind. Like Munro Leaf’s title character, Cugino was more interested in smelling flowers than fighting. From that day forward, he was Ferdinand The Bull.

They competed in hunter, jumper and equitation divisions at shows all over Maryland, including a few “A” rated events. They also enjoyed success through the novice level in eventing. When Megan’s son Colt Childs, now 7, came along, he was happily held on Ferdinand’s back before he was old enough to walk. Colt offered that he and Ferdinand have won ribbons in lead-line classes.

In 2016, Megan purchased the house she and her family now share in Henderson, on Maryland’s Eastern Shore. And Cugino was a major factor in the selection of that home.

“I did it basically so Ferdinand could have some place to retire and I’d have space to get another horse. And I did everything myself; it was just a yard. The house was here, and a friend and I did all the fencing and put in the run-in shed. It was perfect and just what I was looking for.” On Christmas Eve 2016, Megan led Ferdinand off the trailer and into his new home.

“He didn’t bat an eye at anything. I would have expected him to look around a little bit, but he was like, ‘I’m home with my mom.’ ”

When Megan married Tim Campbell, he had never ridden. Thanks entirely to Cugino, Tim is now comfortable in the saddle and willing to take on bigger challenges.

“Wicomico Hunt is closest to us, and they do open hunts. I was thinking it would be fun to join one of those this year and potentially take Tim and Ferdinand. It’s all flat, no jumping. And one of the greatest things about Ferdinand is that even though he showed and was very competitive in jumpers and eventing, he is a trail horse extraordinaire. I take him all the time up to Tuckahoe State Park, which is right up the road from here, as well as other county and state parks. We just trailer over.”

Over the past several months, two more Thoroughbreds have joined the fold. Spicy Girl Red (Point Given—Auspice, by Robellino) is a 6-year-old MAHR graduate who won four of 31 starts and earned $94,852. Now called Vada, she is coming along slowly to develop into Ferdinand’s successor in the show ring. Six-year-old Gift Banda (GB), a winning son of Compton Place called Biggie, is ready to show.

Megan and Tim had their first child a year ago, and during the last few months of her pregnancy and after delivery, Cugino was given some downtime. Now 20, he’s starting to get a little arthritic.

“Just here and there I can feel that stiffness and changes in the hind end a little bit. He’s just now beginning to develop that old man topline, but otherwise he’s in great shape. So we might do a few small shows this summer. I ride with Hilary Gibbons-Neff in Easton, which is about 30 minutes from here, and we’ll discuss it. He’s been such a good show horse, but also so trustworthy with my husband and children. The perfect all-around family horse.”

The family horse with the sophisticated name.

“Ferdinand is kind of a cumbersome nickname, but Ferd just doesn’t suit him. He’s too majestic and regal looking for that.”