Eleven North and Who’s the Cowboy

The last thing one would expect to find amidst a bustling retail metropolis is a Thoroughbred nursery. But tucked behind a row of evergreens on the busiest stretch of asphalt in Clementon, N.J., is exactly that. 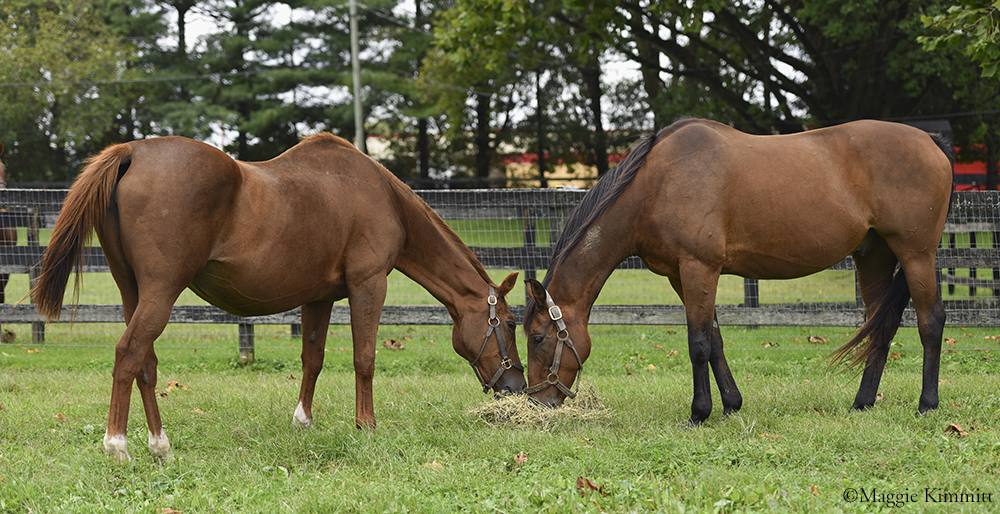 Sleeter Farm is the 50-acre homestead of former trainer Gerald Sleeter and his wife, Carolyn. Gerald, who turned 80 Oct. 1, was born on the property. The Sleeters raised their family there. They also bred, raised and raced some of the best runners in the New Jersey Thoroughbred industry. Two – multiple stakes-winning siblings Eleven North and Who’s the Cowboy – are retired on the farm.

A 26-year-old daughter of Northern Idol and the Better Arbitor mare Image’s Image, Eleven North was foaled on the farm in 1994 and raced for the family from 1996-2001 – winning 16 times in 40 starts for Gerald and the Sleeters’ son Kevin as trainers.

Eleven North’s path to success was anything but clear sailing. The quirky and problematic youngster needed some resourceful creativity to actually get to the races. She was broken at the farm by Pete Van Trump, who years later made headlines as the exercise rider of Smarty Jones. As there is no training track on the property, Gerry Sleeter vanned his charges to Atlantic City.

“Well, they couldn’t load Eleven North,” Carolyn said. “They ended up backing her into the trailer and she rode all the way to Atlantic City backward. When she started going to the track, she would refuse to gallop and just lie down on the track. The exercise rider there was Billy Hamer, and every day he would take her out on the grass to work with her late in the mornings. She would draw a crowd, people watching to see what she was going to do.”

Security guards eventually broke up the sideshow, telling Hamer that he’d have to move to the training track. The filly did work through her issues and began galloping again, but then decided that she didn’t like the starting gate.

Starter Robert “Spec” Alexander, who passed away last year at age 80, put it pretty simply to the Sleeters.

“This filly is smarter than my whole gate crew,” he told them.

Eleven North ended up being backed into the gate when she ran, and won three of five starts in her first season (1996) to be crowned New Jersey-bred champion 2-year-old.

“The first thing that Gerry did was go buy a side-loading trailer for her,” said Carolyn.

Eleven North made every one of her 40 starts in New Jersey. Among her stakes wins were the Little Silver, Thomas J. Malley, Luvinheriseasy, Wistful Handicap and two runnings of the Fair Haven Handicap. She headed home to Sleeter Farm at age 7 to start life as a broodmare with $459,755 to her credit.

Eleven North produced 11 foals, the best of whom was her first, Flirtatious Smile. By Not For Love, he won nine times and earned $380,225 in 80 starts. Eleven North holds the distinction as Gerald’s top money-earning runner during his long training career. Monmouth Park paid tribute to the mare with the creation of the Eleven North Handicap, a 6-furlong contest for fillies and mares.

In 2002, Eleven North’s dam Image’s Image foaled a colt by farm stallion Intensity. Carolyn wanted a cowboy-themed name for the sturdy bay grandson of Gone West. She submitted several names referencing champion rodeo cowboys, but all were rejected by The Jockey Club. Her solution came from a very unexpected source.

“My dad passed away a year or so before, and my mother shined his cowboy boots up and put them next to his chair where he always sat. Her great-granddaughter came in one day to see her; she was about 3 years old. Seeing the boots, she put her hands on her hips and said, ‘So who’s the cowboy?’ She thought my mother had a boyfriend. So when my mother told me that story, I said I was going to submit that name.”

To devotees of New Jersey racing, it became a household name. Trained by Kevin, Who’s the Cowboy won eight stakes races at Monmouth Park for the Sleeter family from 2005-08. His name is inked as the winner of several of New Jersey’s premiere events including the Icecapade Stakes and Colts Neck Handicap twice, as well as the Friendly Lover Handicap, Rumson, City Zip and Teddy Drone Stakes. He was named state-bred champion sprinter of 2006.

The Sleeters lost him in August 2010 when Gary Contessa claimed him for $25,000 at Monmouth Park for owner Maggi Moss. Heartbroken, they kept tabs on the gelding – which was no mean feat. Who’s the Cowboy changed hands eight times in three years after the Contessa claim, running in New Jersey, New York and Pennsylvania. He made 17 starts in 2011 at age 9. He surpassed $1 million in earnings that year when he won an optional claimer at Monmouth for trainer Peter Walder and owner Island Wind Racing. He was claimed out of that race for $15,000 by trainer Chuck Spina for George O’Malley.

Who’s the Cowboy was running for a $5,000 claiming tag at age 11 in 2013 for Law Legacy Stable and trainer Skip Einhorn. The Sleeters contacted the connections and expressed their desire to have the horse back upon his retirement. After two lackluster efforts that season, Einhorn reached out and honored their request.

The Sleeters prepared a paddock especially for their homebred. Who’s the Cowboy returned home the conquering hero with a record of 88-20-16-14 and $1,138,867 earned after a nine-season career. Reschooling him for a life after racing was a consideration, but the idea was vetoed by the horse himself.

“A girl came out to try him,” Carolyn said. “She lunged him for a bit, did all kinds of circles with him. And that night he colicked, so that was the end of that. He never left this farm again.”

That paddock remains his kingdom, and he’s doted on and treated like the star he is. He’s still strong and spry at 18. And the only horse he will allow to share his space is his older sister, Eleven North.