His story certainly wasn’t written on the racetrack. He made one career start at Remington Park in 2001, finished a dismal 11th and earned $62. What he accomplished – and the many lives he touched – in the years since made Chama the horse of a lifetime for several people. 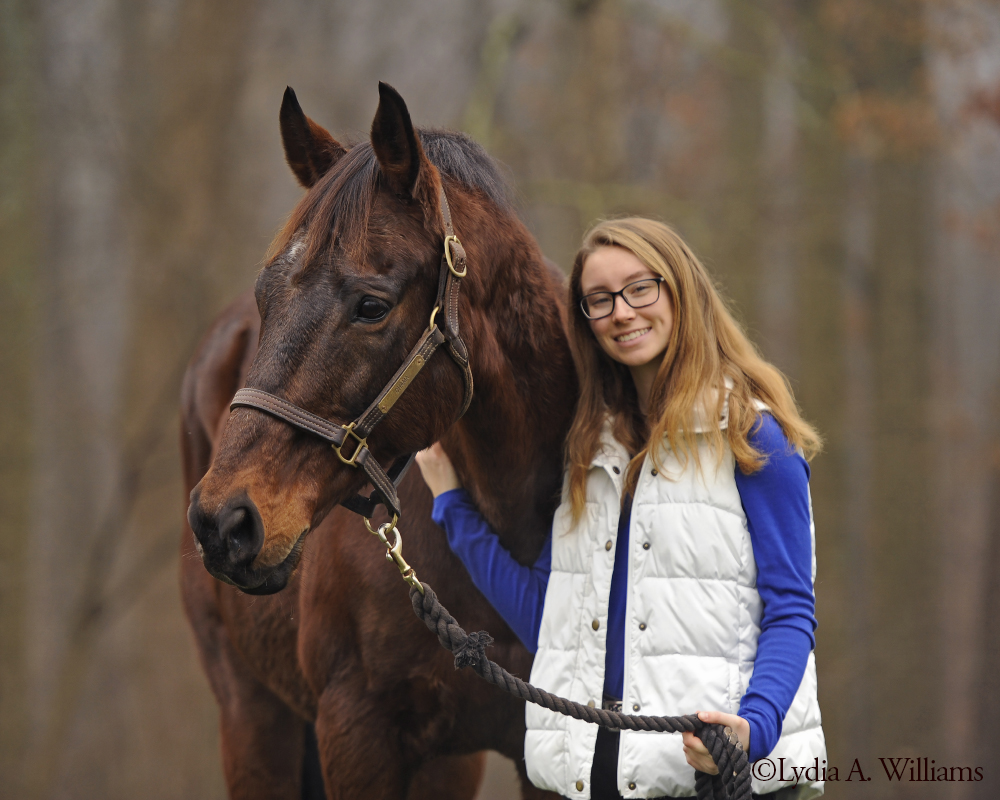 Now 23, the dark bay son of the Mr. Prospector stallion Laabity and the Doonesbury mare Dee Dee Doon was bred in Oklahoma by Tom and Leslie Hubble’s Tarjeta Ranch. The one start was made for the Hubbles and trainer Shawn Sisneros. All realized immediately they did not have a racehorse on their hands.

Through his owners’ friendship and affiliation with former Jarrettsville, Md., breeder Joy Moore, Chama made his way to Maryland in pursuit of a new life in a more suitable role. Moore found a home for him with friend Jean Walter, who owns and operates a breaking and training farm in nearby White Hall, Md.

“I got him in August 2002, so that’s over 18 years ago,” Walter said. “But I’m still good friends with Leslie and Tom Hubble. I’m just so pleased that I keep all the cards on the horses I’ve had here. So many have come through here that I can’t recall all their names, but I certainly did remember Chama. He was a lovely, very fancy horse.”

A few months after Chama arrived, Walter was contacted by Monkton, Md., neighbor Debbie Baumgardner, whose then 13-year-old daughter was looking for her next event horse. Their budget was modest, and therefore the horse could be green. Four-year-old Chama became future amateur steeplechase jockey Bethany Baumgardner’s introduction to the off-the-track Thoroughbred.

“We bought him and brought him home, and my first day getting on him I went to put my foot in the stirrup and climb on from a mounting block. He took off and I fell in a heap,” Baumgardner said. “Then I remembered they usually kinda jump on racehorses. But I didn’t know anything about it at that point. I had competed through preliminary in eventing on some other horses, but I had never been around one off the track.”

Chama had “all the right pieces,” according to Baumgardner, and they progressed steadily through the intermediate level. “Once it all started to click, he became quite good.”

Baumgardner became a working student for noted eventing coach Sally Cousins, and she and Chama relocated to Cousins’ winter base in Aiken, S.C. “He taught me so much and he was always very kind and very understanding.

Before they did away with the long format three-day events, I did a one-star on him which had the steeplechase and roads and tracks phases. I remember asking Sally, ‘What’s the pace for steeplechase? The hurdles, what are we doing?’ She said, ‘Just jump and land and keep kicking.’ ”

Baumgardner followed those instructions to the letter. She came in quite fast, and Cousins was shocked. “Well, you said just jump and keep kicking,” Baumgardner told her coach.

Baumgardner has since ridden winners over jumps, and been around the Maryland Hunt Cup course. Chama might have fit in there somewhere. “Looking back now, I think he would have been a great steeplechase horse,” she said.

The cold reality of expense kept Baumgardner and Chama from continuing on to eventing’s advanced level. She sold the gelding to Kristin Jankowski, a small animal vet from the Unionville, Pa., area who foxhunted him and competed at some local competitions. Jankowski kept Baumgardner happily in the loop during the years she had him, sending videos and extending an open invitation to visit Chama.

In late 2019, Jankowski contacted Baumgardner with news that she had accepted a teaching position at the University of California Davis School of Veterinary Medicine. She was concerned about shipping the horse and what options she would have in her new situation. Baumgardner, then newly employed by trainer Tom Proctor, was heading to New Orleans with the string for the winter.

“He ended up coming back, and then I actually had a local dressage trainer who took him for a while, but he was a little too forward for that so it didn’t quite work out,” Baumgardner said. “He was 21 at that time but he still bounces around, and he was just a bit too much for her so I picked him up in October (2020), brought him home and I rode him a few times. It was like slipping on a comfortable pair of old shoes. I hadn’t ridden him in about 10 years, but he was just so perfect. Everything he was all those years ago, it was like a familiar friend being back.”

Now an assistant trainer for Proctor, Baumgardner headed south to run the operation’s barn at Tampa Bay Downs right after Thanksgiving. Before her departure, she found the ideal home for Chama.

“Of course he could have stayed at my parents,” she said. “But he’s always worked for a living. I’m so worried that even though we have fields and other retirees here that he’d kind of lay to waste, almost. He wants to be doing something.”

Through friend and riding instructor Chris Donovan, Baumgardner was connected to the Chance family of Dillsburg, Pa., not far from Harrisburg. Active in eventing, Paul Chance is a chief horse management judge for the United States Pony Club. Wife Lori is the district commissioner for Chestnut Hill Pony Club, which serves the Maryland region and the southern half of Pennsylvania. Chama is the new mount of their teenage daughter, Meredith Chance. The family picked him up from the Baumgardners’ farm in November.

“When I first met him, he always had his ears up, and had such a great personality,” Meredith said. “He really wants to be your friend. He was just so adorable and wants to please, which I love. I did know his age prior to looking at him. But after hearing all his background and actually meeting the horse, his age wasn’t too big of a deal. He has pretty much done anything and is considered a schoolmaster. He’s teaching me so much already, which has been wonderful.”

Raised in the saddle, Meredith has been competing in novice level events and hopes to move up with Chama.

“I am doing a lot of strengthening exercises to build up that muscle again so he is able and comfortable competing,” she said. “He is so sweet; one of the sweetest horses we’ve ever had in the barn. We have four horses here now, and he loves them. But we do have a few grumpy mares that don’t like him yet.” “Or maybe they do like him,” Lori Chance laughed. “But we do feel like we couldn’t have ended up with a better horse.”