One of the most recognizable horses at the Fair Hill Training Center in Maryland never won a race. In four career starts-two each at Laurel Park and Penn National-he defeated a grand total of four horses. His career earnings reflect a balance of “$0.” But to Amy Jackson, co-owner of Fair Hill Equine Therapy Center, stable pony Emory is priceless. 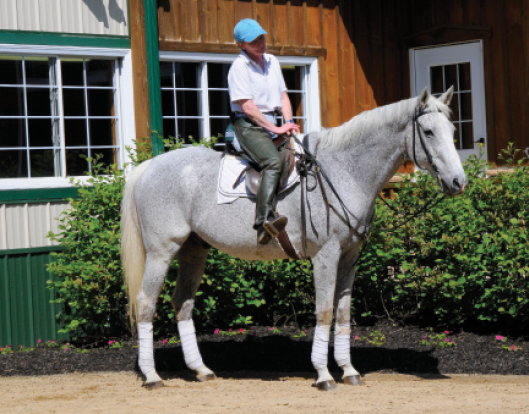 Emory (yes, that’s his real name) was bred and owned by Corinne Christmas Sullivan and foaled in Maryland on May 12, 1988. At first glance, his lineage seems as humble as his race record.

His sire, the Christopher R. stallion Mr. Baggins, did win 11 of his 39 career starts, including Bowie’s Southern Maryland and Star de Naskra Handicaps. But Emory was his mother’s son. Dam Wisette (Wise Exchange—Sue’s Angle, by Quadrangle) also made four starts without ever hitting the board or earning a dime.

Jen Heimer was ponying at Laurel Park when she first saw the flea-bitten gray gelding. At the time, trainer Donnie Letts had him and was using him as his barn pony.

“Emory would run off with him almost every morning for almost 2 miles. And I really wanted Em, I just knew that he was probably misunderstood and he needed to be mine,” she said.

“He got loose one morning from Donnie and slipped and fell on the asphalt, and he put a big hole in his stifle and his back ankle, and that’s when Donnie said that I could buy him.”

Heimer knew a diamond in the rough when she saw one. His morning hijinks with Letts had proven his athleticism and stamina, convincing Heimer that he’d be able to withstand the rigors of the job.

“As soon as I started ponying horses off of him, I knew that he was one in a million. He could go all day, he never got tired, and he took pride in his work,” she said. “Everybody used to call him ‘The Operator.’ He was very strategic; you really didn’t have to do anything up there but hold on to the shank and stay on him.”

Heimer kept Emory at the track for three years, and after retiring from ponying she dabbled in lower-level eventing.

“But he still wasn’t the same; I knew he wanted to be on the track,” she said. “I took some time off of horses altogether when I had my daughter in 2000, and Emory had to be in work. He was absolutely miserable. That’s when I let Benny and Laura Feliciano use him.

“Laura called me and said ‘I don’t know if you want Emory back or not, but I know of somebody who really wants to buy him.’ That was the Jacksons. I knew they were great people who took amazing care of their horses and Emory would be happy for life.”

At that time, Amy Jackson and her husband Bruce trained a small string of horses at Laurel Park. One, a colt by Capote, was so rank and dangerous to handle that Jackson decided it was time to invest in a pony-and a good one.

Jackson heard of a pony for sale at Feliciano’s barn and went for a test ride. She hopped on Emory and headed toward the track with the Capote colt in tow. Within seconds, the colt was on two legs; and just as quickly, Emory reacted. “He grabbed the colt by his nose and shook him violently. He said ‘Listen up, buddy!’ And you know, that colt never said boo to a goose after that.”

Decision made, Jackson paid Heimer $800 for Emory and his saddle and took her new pony to her barn.

At Fair Hill, Emory is as much a part of the scenery as the clockers’ stand. Fillies adore him; Jackson calls him the “mare magnet” for his ability to calm them down. But stud colts are his thing.

“They’ll act up and start their stuff, and I’ll say ‘Sorry about your lot. Meet Emory,’ ” she said. “He’s got those long old gnashers. He’s a legend,” she went on. “He still works five to six sets per day, except Sundays. He’s my best friend and a savior to many an exercise rider in difficulty. He’s taught me more about horses than any human ever could.”

Emory takes yearlings to the track, escorts racehorses to the starting gate, encourages Pony Clubbers over a creek for the first time. He never says no, even gladly taking Maryland Gov. Martin O’Malley for a ride during a visit to Fair Hill last year.

“He is just psychically smart; the best horse in the world,” Jackson said.

She recalled one morning at Fair Hill when she was sitting on the track during a set, chatting with another trainer. Reins on Emory’s neck, paying no attention at all, Jackson suddenly found herself galloping down the outside rail in pursuit of a loose horse. “Before I knew it, he was off. All I had to do was reach down and grab the [other horse’s] reins.”

As did Heimer, Jackson has tried other pursuits with the gelding, including a brief stint foxhunting. “He was too strong and got too excited. But he’d jump off a cliff if you asked him to.”

And while he does get occasional breaks at the Jacksons’ home for freshening, the horse is truly happy only when he’s at the training center, doing his job.

When pressed, though, Jackson admits that there is one problem with 24-year-old Emory.

“He’s indispensable,” she said. “I don’t know what I’ll ever do without him.”