In the autumn of 2000, 2-year-old Your Out was posing for win photos at Mid-Atlantic racetracks. Eugene Ford’s homebred filly by Country Life Farm’s Allen’s Prospect from the Fast Play mare Our Friend Hidayet was brilliant in her freshman season. She followed up her winning Delaware Park debut with three stakes wins at Laurel Park – the Maryland Million Lassie, Heavenly Cause and Maryland Juvenile Filly Championship. The success made her that year’s Maryland-bred 2-year-old filly champion. 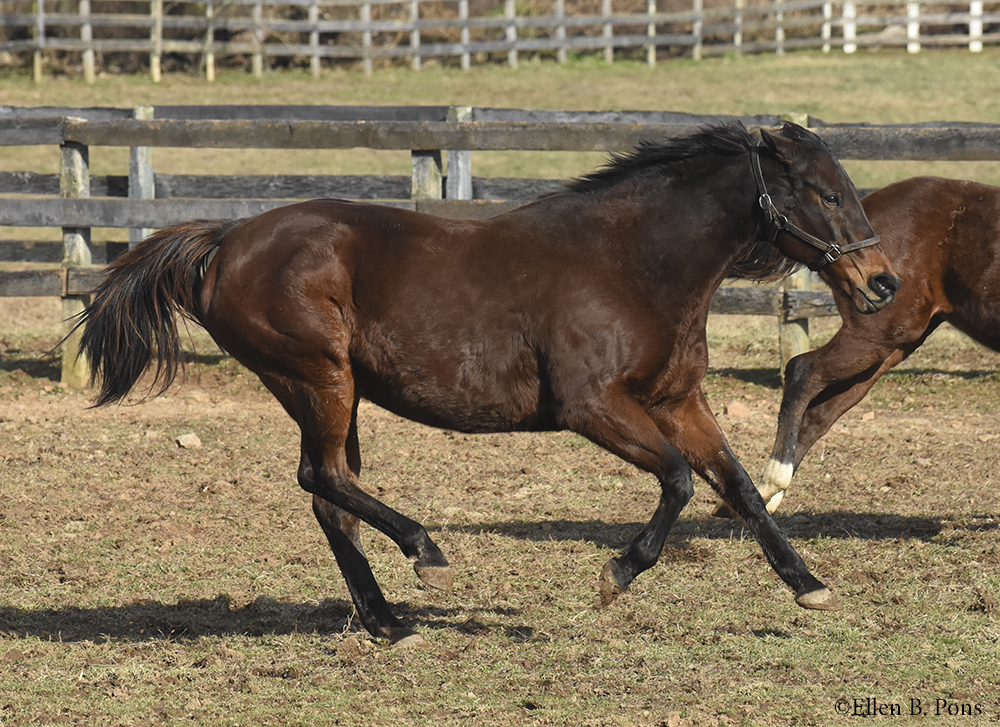 She made four starts at 3 in 2001, finishing second in the Belair, Jameela and Politely before winning the Twixt Stakes that December. Back at 4 in 2002, she went postward nine times, all in stakes. Wins in Delaware Park’s Summer King and Obeah encouraged trainer Graham Motion and Ford to take a shot at that track’s marquee event – the $600,000 Delaware Handicap-G3. Your Out lost by a neck to multiple graded stakes winner Summer Colony, who won Saratoga’s Personal Ensign-G1 in her next start.

Your Out ventured to Arlington Park in early September and finished third in the Arlington Matron-G3. Back to Pimlico three weeks later, she turned in the only poor performance of her career, finishing sixth in the Maryland Million Ladies. She rallied to finish second in her next start, which would be her last, Laurel Park’s Waya Stakes Oct. 26, 2002. Her record of 17-7-6-2 rewarded her connections with earnings of $518,710.

Christy Holden, general manager at Country Life and Merryland farms, remembers that Your Out had a troublesome start as a broodmare. Unable to keep her in foal, Ford had Country Life consign the 7-year-old mare to Fasig-Tipton Midlantic’s December mixed sale at Timonium, Md., in 2005. Purchased by John Crane Jr., she topped the sale at $140,000 while in foal to Lion Hearted.

She produced a colt in January. Named The Astekaking, he never raced. Crane pinched no pennies over the next several breeding seasons, sending Your Out to Medaglia d’Oro, Malibu Moon, Forestry and Corinthian. Of her five foals, only New Moon On Monday (a 2009 filly by Malibu Moon) won in this country – a single race for earnings of $15,583.

Ten years after that filly was born, Your Out appeared on the Facebook page of Moore’s Equines for Rescue. Owned and operated by husband and wife Brian and Jen Moore in Lebanon, Pa., the website outlines the farm’s mission with a message from Jen:

“As most people are aware, my husband buys ALL classes of horses on a daily basis . . . in hopes of finding the slaughter-bound horses and the pipeline horses alternative homes. As we are not a non-profit organization we are offering them to the public for purchase not for ‘adoption.’ Some of these horses are broke, registered and sound. Blemishes and known issues will be pointed out as we see them but most of the history of these animals is unknown. We hope to build relationships with those interested in providing these horses with homes.”

The horses get hay, water, care and – ultimately – a way out. Brian Moore bought Your Out, then 21, at the New Holland Auction in Pennsylvania. Sue Kenny, office manager for Motion, received a call about the Facebook post, advising her that a former trainee had just been bailed from a kill lot. Kenny sprang into action. She called Motion’s wife Anita and the response was quick. “Well, we’ve got to get her back.”

Arranging transport and a suitable home were the immediate issues. Kenny reached out to Bev Strauss of MidAtlantic Horse Rescue and asked how to proceed. Strauss advised her to contact Penny Parker, whose name appears on the Moores’ list of haulers and quarantine facilities.

“So I called Penny and asked if she could pick her up but said we didn’t know where to take her,” Kenny said. “She said she had a quarantine farm. Penny took Your Out there, and she took great care of her. She got her feet done, her teeth done. She did the strangles test, which is always a worry, and thankfully it came back negative.”

It had been more than 13 years since Your Out passed through the Timonium sales ring for Country Life. Kenny contacted the farm and explained the situation to owner Josh Pons. And didn’t stop. Digging deeper, she managed to locate Crane.

“He was absolutely distraught at the news,” Kenny said. “He had gone through a divorce and no longer had any horses. As far as he knew, all three mares he had owned were happy on a farm in Pennsylvania.”

Pons, on the board of the Thoroughbred Education and Research Foundation with Anita Motion, agreed to give Your Out a home at Merryland, Country Life’s nursery and training division in Hydes, Md. Kenny and fellow Motion employee Liz Currey Silva drove the Herringswell truck and trailer to Parker’s farm.

“She looked great,” Kenny said of the mare. “We took her down to Merryland, she went into her stall, was immediately at home and ignored us.”

Holden remembered as well. Your Out joined Merryland’s band of retired broodmares in June 2019, fulfilling the role of babysitter to new weanlings. Among her pasturemates are Smash Review, Dance for Jan and As Long as Ittakes. Holden calls it the Million Dollar Field.

“They all earned six figures themselves or produced winners of six figures,” she explained.

“Your Out and As Long as Ittakes are total pals,” Josh Pons’ wife, Ellen, added. “They babysit the fillies together and are fast friends in many ways.”
Merryland’s Kim Crowell said Your Out doesn’t object when foals “eat off her plate, too” – meaning that she doesn’t turn a hair if one of her young charges occasionally tries to nurse.

She was less amenable when Holden and Ellen Pons pulled her away from the other old gals to clean her up for photos.

“There was a lot of spinning and screaming, but we did manage to get her glamour shots done,” Holden laughed. “She’s 23, but that’s the Allen’s Prospect in her. They all had that fire in them.”