“I went to ride him the other day, and when I went out to catch him, he and the other horse were rearing up, striking at one another, running around like they were yearlings. He’s 16 now, but don’t tell him that. He still thinks he is a racehorse. He’s not lacking in confidence.”

“He” is Class Bopper. She is Remy Winants, and nothing about that scene surprised her. 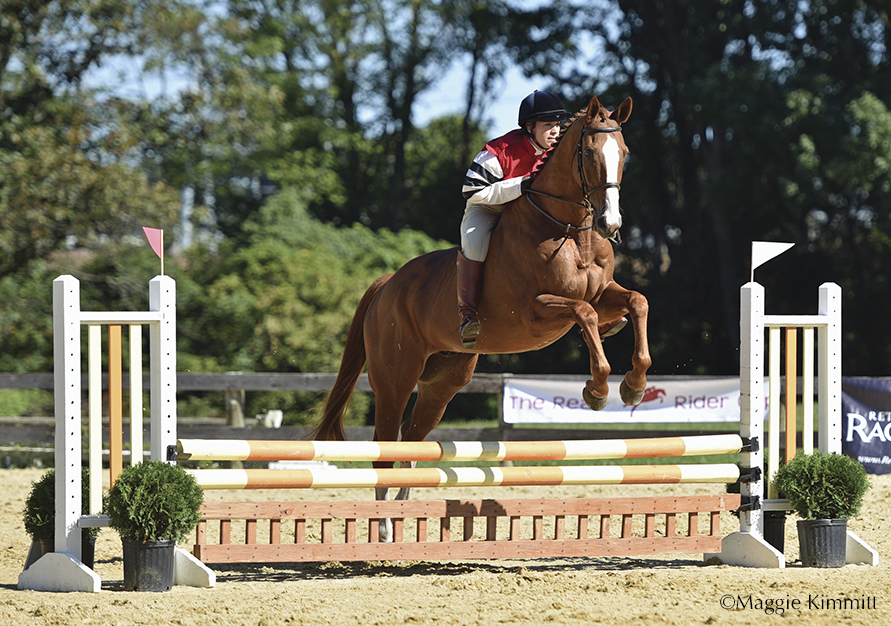 Winants has known the horse for most of his life. Bred in Virginia by the late Mignon C. Smith’s Mede Cahaba Stable and Stud, the chestnut gelding was sent as a yearling in 2006 to Winants’ mother, trainer Lilith Boucher. By Bop out of the Class Secret mare Class Vim, Class Bopper was started by Lilith’s husband, jockey Richard Boucher, at their farm in Camden, S.C.

Class Bopper made seven starts on the flat at 2 and 3 before Lilith sent him and another Mede Cahaba homebred, Class Real Rock, to Winants in Pennsylvania. Born in Middleburg, Va., she has spent most of her life in the Unionville area where she now works as stable manager for Mr. Stewart’s Cheshire Foxhounds.

“It was interesting because Richard was a little higher on Bopper,” Winants said, “but when I was teaching them how to jump, Real Rock was the one who stood out to me. So Richard and I had a little bet going as to who would be the 3-year-old [National Steeplechase Association] champion that year, and it ended up being Class Real Rock. But Bopper was the one who went on to be the better racehorse.”

Class Bopper’s first career win came in his first effort over jumps – a maiden special weight at Morven Park with Richard in the irons Oct. 11, 2008. Two starts later, he and Richard won the Raymond G. Woolfe Memorial 3-year-old hurdle stakes on the Colonial Cup undercard at Springdale Race Course in Camden. Still, he finished second to his stablemate in the division standings.

The Bouchers shifted their operations north each summer, escaping South Carolina’s heat. With a stable full of Virginia-breds, Lilith took full advantage of opportunities on the turf course at Colonial Downs. Class Bopper broke his flat maiden there in June 2009, then inked another win in an allowance at Laurel in August. Reunited with Richard over hurdles at Callaway Gardens in November, he won the AFLAC Supreme Hurdle Stakes. In his five races that year, four on the flat and one over jumps, he won three and finished second twice.

Sold to Boucher client Rodman Moorhead III, Class Bopper returned at age 5 in 2010 and won the Grade 3 Zeke Ferguson Memorial Hurdle at Colonial Downs while also making flat starts at Keeneland, Pimlico and Kentucky Downs. Limited by injuries, he didn’t run in 2011 and made just one start in 2012. He ran twice in 2013, winning on the flat at Colonial Downs and returned in April 2014 in the Bouchers’ Why Not Racing silks – winning a hurdle claimer that year and a flat claimer at Penn National the next year. He made his final start at Delaware Park a month later and was retired with a record of 35-9-2-2 and $226,914.

Class Bopper headed back to Camden where Winants’ younger sister, Mell Boucher, rode him for a few years.
“Mell won her first junior horse race on him at the Aiken Trials when she was 12,” Winants said. “She showed him a tiny bit, and Richard actually tried to show him, but he couldn’t remember any of the courses.”

Class Bopper’s next stop was Pennsylvania, where Winants began foxhunting him. When Lilith scaled back her Unionville-based business developing hunters, the horse relocated to the Cheshire barn. Huntsman Ivan Dowling used him for two seasons.

“Bopper was really good but pretty strong in the hunt field,” Winants said. “He just never really settled into it; he’d be competitive with the whip’s horse, and that’s not good. Last spring they [Cheshire] made some cutbacks on the horses, and he ended up back home with us.”

It was the first time in many years that Winants had a horse she could call her own. After a dramatic 110-pound weight loss, she was ready for her own project and hopeful she would regain her confidence in the tack.

“So I took him on as a show horse, and I foxhunt him and hack him out, which is sometimes probably not quite as enjoyable as it should be.”

But even Winants can’t deny that it’s always entertaining. On a recent outing with the Elkridge-Harford Hounds in early January, she and Class Bopper were headed in the field by young rider Will Slater on his pony Chewy.

“The pony came up next to us, and Bopper slapped his ears back and was like ‘It’s ON!’ I managed to hold him, but I could feel the gears clicking in his head. It was hysterical. All I could think was, ‘Seriously, Bopper?’ He goes out there and he’s a lot of fun, but he looks like a racehorse doing it.”

Winants competes in the jumper division at horse shows and Class Bopper is always a handful in the warm-up ring but immediately focuses on the job once he goes into the arena.

“It’s almost like he’s going to the starting gate – he’s jigging, bucking a little bit. But then he just goes into the ring and is totally like ‘I know what I’m doing.’ ”

“I got there and I was looking around, and I thought ‘I’m gonna try it.’ I thought if it didn’t go well, I’d go back and get my saddle,” said Winants. “But that’s the kind of confidence Bopper gives you. You know the jumps are never going to be an issue. If you can hang on to him, it’s going to be so much fun. And we had a beautiful round.”

In the video afterward, Winants couldn’t help but get a little emotional. “I feel like I’m finally getting my turn with him, and it’s very exciting. We’re getting kind of a second chance together, which is a lot of fun.”