Betty McCue was window shopping. Picking up a retired Thoroughbred from the Laurel Park barn of her friend Hugh McMahon, McCue customarily glanced in the stalls to see what else might be waiting in the wings. McMahon was assistant at that time to leading Mid-Atlantic trainer Scott Lake. McCue, owner and operator – with her sister, Evelyn Hughes Martin – of White Hall, Md.-based EHM Stables, was always on the lookout for suitable candidates as lesson and show prospects for her students. 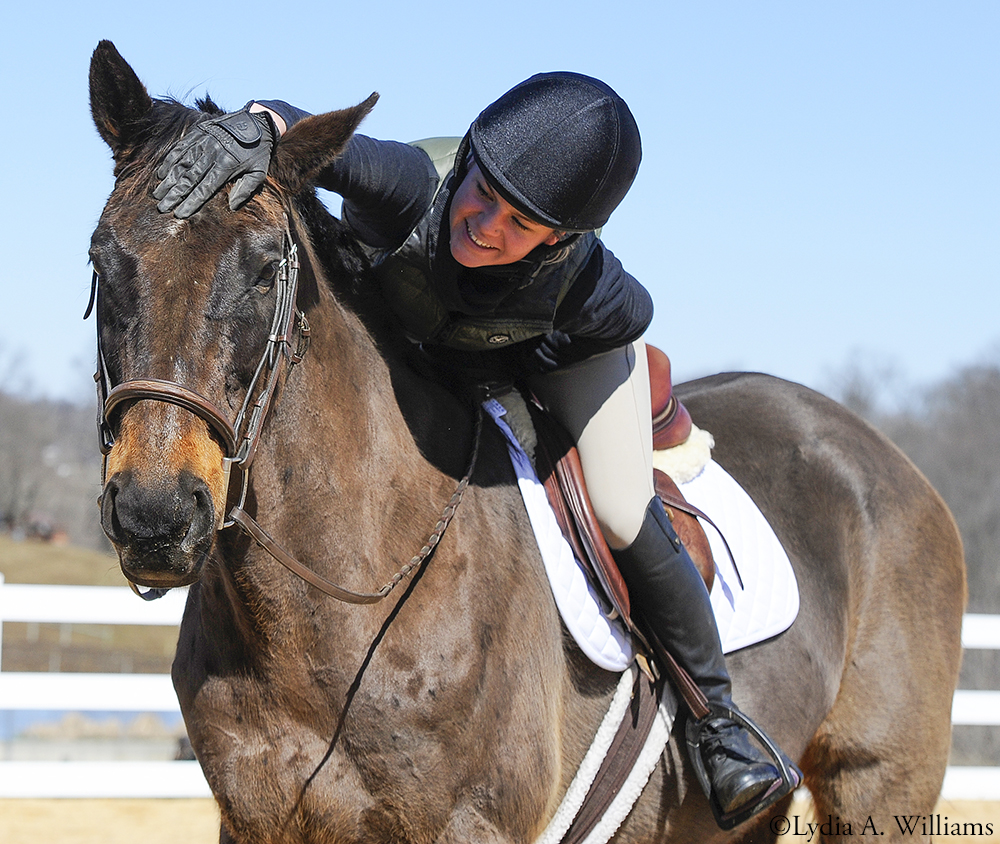 McCue stopped at a dark bay head hanging over a stall door.

After closer inspection, she told McMahon to keep her in mind when he was ready to find a new home for the horse.

“Hang on a minute,” he told McCue, and ducked into his office to call the horse’s owner Robert Cole. A few minutes later, McMahon was back with good news. “OK, you can take him too,” he said.

The horse was Prideland, and McCue was instantly smitten.

“It was like picking out my heartthrob, right there,” she said. “He has sort of an old-fashioned look about him. When I saw him, I said ‘Ohmygosh, I love this horse.’ ”

His looks and build evoke a different era. Envision the black and white photos of Citation, Count Fleet, Stymie. The masculine head with its ever-so-slightly Roman nose. Strong shoulder, good bone, powerful hindquarters – a study in rugged elegance. He’s the kind of Thoroughbred McCue grew up riding, foxhunting and showing in Virginia.

Bred in Maryland by David and JoAnn Hayden’s Dark Hollow Farm, the son of Lion Hearted was produced from Tequila Sheila, one of the Haydens’ favorite mares. He was foaled at their Upperco, Md., farm Feb. 15, 2002.

“Tequila Sheila was by Hagley, and we loved a Hagley mare,” JoAnn Hayden said. “Prideland was a lovely looking colt, and the thing that I distinctly remember was that he had the same disposition as his mother. He was what I call today the invisible yearling. The ones that you never have to do anything out of the ordinary; they do whatever you ask of them, they never cause any hoopla. So agreeable.”

Dark Hollow offered him at the 2003 Fasig-Tipton Midlantic fall yearling sale at Timonium where he was purchased for $40,000 by Sovereign Stables and Gatsas Thoroughbreds.

Sent to New York trainer John Terra­nova, Prideland won at Saratoga and Aque­duct. He was claimed by Altreo Persaud for owner Anthony Calabrese April 28, 2007. Less than three months later, Lake dropped a slip for Cole at Saratoga, and Prideland soon ended up at Lake’s Maryland base. He won his final start, at Charles Town, Dec. 8, 2007. He left Laurel Park for his new life with McCue after 24 starts, six wins and $159,037 earned.

McCue planned to keep the gelding for herself, but ultimately had to share with her daughter Mary Elizabeth and student Anastasia Vialov.

“I just loved him so much. Then Mary Elizabeth decided he was going to be hers, so she took him over and started showing him. She went to college and that was when Anastasia took him over, and he was her horse, believe me. She lived and breathed that horse.”

Vialov began riding with McCue while still in middle school. Her reaction to Prideland replicated McCue’s; girl and horse bonded quickly and deeply. Vialov hopped on tackless and rode him through the fields, she celebrated his birthday, planning parties and baking cakes every year.

“They were inseparable,” McCue said.

Competitively, they were formidable. The pair foxhunted, evented and regularly hauled home ribbons and trophies from horse shows until Vialov left for the University of Kentucky. Now in veterinary school in London, she credits the gelding with her career decisions.

“I would work at EHM Stables in exchange for riding lessons,” Vialov said. “Betty had a variety of horses and ponies to choose from, but I particularly fell in love with Prideland. He really opened up the world of horses for me. I did everything on him – competed in hunters, jumpers, paper chases, foxhunted, competed in junior field master chases and even rode him around Pimlico for Canter for the Cure. We developed a really close bond. He was the most versatile horse and had the true heart of the Thoroughbred, always wanting to please and trying his hardest. He was the horse that sparked my love of Thoroughbreds and pushed me to want to become a veterinarian.”

Vialov and Prideland also pushed JoAnn Hayden back into the saddle.

“I was so happy that Betty got him. I went to the shows and adored watching Anastasia ride him,” Hayden said. “And actually she convinced me to ride him in the adult leadline class at the Totally Thoroughbred horse show at Pimlico. Anastasia led me around. It was crazy; there might have been 12 people in there. We were all fossils . . . I think I was one of the youngest. I hadn’t ridden in so long at that time. They ended up asking our ages, and the oldest person won the class.”

Former HRTV racing analyst and on-air host Carolyn Conley was another big fan. She rode Prideland in the show at Pimlico in 2012, and they were prominently featured in the channel’s documentary about the competition. For all his versatility and good nature, Prideland has one issue. Mane pulling, and it goes way back to the beginning.

While prepping Dark Hollow’s entrants for the 2003 Maryland Horse Breeders Association yearling show, Hayden instructed her grooms to leave the colt for last when pulling his mane, as he’d need some tranquilizer. Before leaving the barn for the night, she posted a two-word note on his stall door – DO MANE.

The next morning, she asked her staff how things had gone with clipping and grooming. One particular former employee spoke right up.

“Oh, they were all fine except for that Do Mane – he was TERRIBLE!!”

“He thought that note I’d stuck on the door was the colt’s name,” Hayden said with a laugh. “He pronounced it like it was all one word: Dumane. And he called him that until the day we sold him. He’d say, ‘That Dumane is the nicest horse. Walks right up the ramp onto the van. Never any trouble.’ ”

Now 19, Dumane er Prideland is still the nicest horse. He’ll compete this year with another of McCue’s students, Gretchen Eisenberg. Like Vialov, Eisenberg has clicked with the old boy and considers him “her” horse. McCue attributes Prideland’s continued thriving health and happiness to the close bonds forged with devoted riders.

“He has been the most wonderful horse ever, ever, ever,” she said. “He’s just been so versatile. He doesn’t look like he’s aging at all, and he’s just ready to go again.”