Details
From May 2021 Issue
Written by Maggie Kimmitt

The Jockey Club recognizes him as High Spirited. Racegoers at Mid-Atlantic tracks in 2006-07 probably wouldn’t recognize him at all. But in the realm of interscholastic polo, he’s instantly recognized as “Cholo” –  Chicano/Latino slang for gangster. His is a feel-good story. Call it rehabilitation, redemption, rebirth. But above all, call it what it is: the remarkable truth. 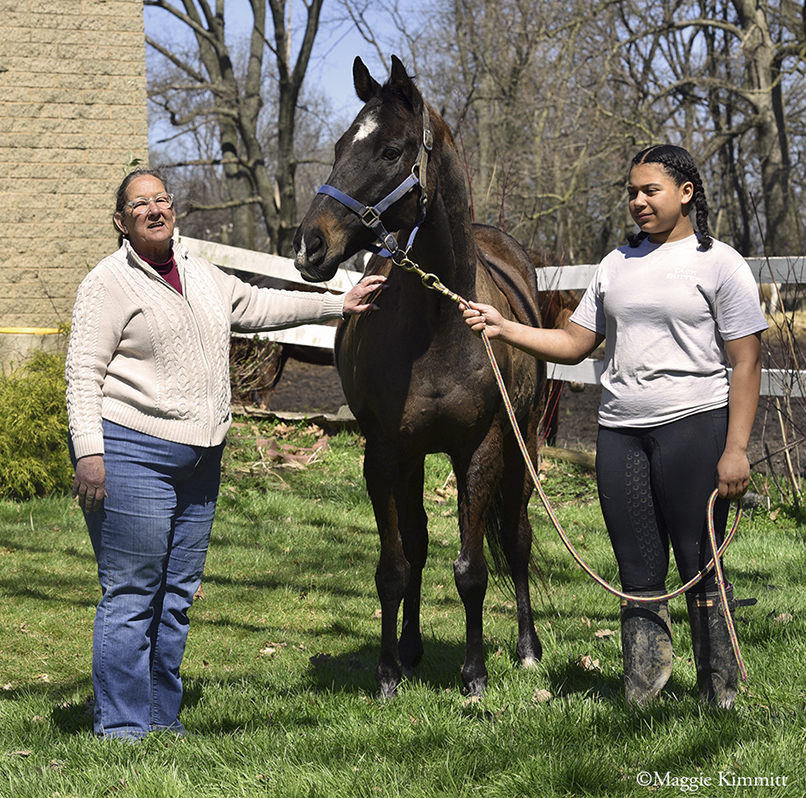 On the afternoon of Dec. 3, 2006, Lezlie Hiner, founder of Work To Ride in Philadelphia, brought one of her young students to watch High Spirited in the second race at Philadelphia Park.

Kareem Rosser, then 13, was ready for his next project horse, and Hiner believed the dark bay gelding was the perfect candidate. The casual convergence of those three paths set life-changing wheels in motion.
Hiner had been contacted by her long-time friend Kate Goldenberg who owns and operates Safe Haven Equine Rescue and is also High Spirited’s breeder.

Familiar with the Work To Ride program, Goldenberg frequently called Hiner when she had a suitable horse. This time, the two women had a different approach. High Spirited’s owner, T-Bird Stable, transferred ownership to Work To Ride and the Pennsylvania-bred son of Judge T C and the Private Terms mare Personal Spirit raced in the organization’s name while remaining in the barn of trainer Pam Shavelson. Shavelson waived her day rate for the group.

Unraced at 2, High Spirited made 14 starts at 3 in 2006 and ran once as a 4-year-old. He carried the Work To Ride silks in his final four starts. With Hiner and Rosser looking on that day, he finished third in a maiden claimer going 7 furlongs on the dirt. His new owners were pleased; the $1,262 he earned that day was a welcome boost to Work To Ride’s coffers.

Hiner founded Work To Ride, Inc. as a 501(c)(3) non-profit in 1994. Since inception, it has been based at Chamounix Equestrian Center in Philadelphia’s Fairmount Park. The group’s website defines it as “a community-based prevention program that aids disadvantaged urban youth through constructive activities centered on horsemanship, equine sports and education.”

“I started out of high school, worked at a small hunter/jumper farm in Horsham, Pennsylvania,” Hiner began. “From there through a series of introductions I got my first racing job with [trainer] Ron Glorioso. Then after that I went to work for Bill Mott. I traveled with Mott to Oaklawn Park.”

Post-racing, Hiner developed an interest in polo when introduced to the game by friends. Upon the development of Work To Ride, Hiner naturally passed that interest along to her students. She would often take the kids to polo games and farm them out as hotwalkers. They enjoyed making money for the jobs, but that soon turned into, “We want to play.”

“That was part of our business plan actually,” she said. “We’d get some OTTBs, train them for polo and sell them, and that money would be used for the kids for college. That was the genesis of the whole thing, and we had done it before at that point. But this was the first and only horse we owned while he was racing.”

“He obviously wasn’t going to break his maiden,” Hiner said. “He was staying sound, and we thought rather than Pam putting more time and money into him, we’d let him run one last race, and if he didn’t do well, we’d retire him. And that’s what happened.”

High Spirited finished fifth in the same conditions Jan. 17, 2007. He left Philadelphia Park for Chamounix the next day, taking with him statistics of 15-0-1-2 and an even $5,000 earned. Racing career over, he was re-christened by Rosser as Cholo, gangster polo pony.

“I immediately fell in love with him, just his calm demeanor,” Rosser said. “You’d have had no idea he came right off the racetrack. I sat on him two days after his last race. I was just direct reining him, because all he knew how to do then was turn left. But I realized he had the potential to become a polo pony because he had just gotten done running and he was so relaxed.”

Rosser was headed to school at Valley Forge Military Academy, so his time working with Cholo was limited. The first few months were spent learning the basics, and Rosser found his new project to be athletic, agreeable and a very quick learner.

There was just one catch. Due to a chronic condition with a type of fungus in his ear, Cholo would never – and still will not – tolerate being bridled. His objections were so strong that Hiner and Rosser opted to take the bridle apart each time they tacked him up rather than cause him the undue stress of pulling it over his ears and poll.

“I got to the point where I would put on a halter and two lead ropes and just ride him around,” Rosser said. “I’d put on a saddle and ride him in his halter because it was such a pain in the butt to try to get the bridle on. And I was shorter at that time, so he knew he could kinda get over on me because I couldn’t reach his head.”

The horse made it up to Rosser in many other ways.

“Cholo was always meant to be Kareem’s horse,” Hiner said. When life at Valley Forge proved difficult, Hiner sent the gelding to live on campus with Rosser.

“Midway through my first year there, I was just struggling mentally, and Lezlie thought it would be good to send Cholo to me,” Rosser said. “And I wanted to continue to work with him. It was great to have him there. After classes I was able to go to the barn and ride my own horse.”

The pair continued to progress and excel. Cholo proved a rarity among polo mounts – a horse who played in a plain snaffle bit.

“That was another thing that was really special about him,” Rosser said. “He had an exceptionally soft mouth, and polo players love that.”

Other players noticed Cholo. The horse helped Rosser become one of the premier interscholastic polo players in the country. While still a teenager, he played in Asia, Africa, Europe, South America and Nigeria. In 2011, Rosser, younger brother Daymar and two friends played for the Work To Ride team and became the first African American squad to win a major national polo championship. In 2015, Rosser brought Colorado State University’s polo team the National Intercollegiate Championship. He was also named Intercollegiate Player of the Year and Polo Training Foundation’s Player of the Year.

Earlier this year, Rosser released his memoir, Crossing the Line: A Fearless Team of Brothers and the Sport That Changed Their Lives Forever. Cholo figures prominently throughout Rosser’s story.

“When I first met Cholo I was in eighth grade, and now I’m 28. It’s crazy to think about that,” Rosser said. “I was just a little boy, and now I’m five years into my career [in finance]. I still get over to see him, but he’s had some back issues and sees a chiropractor, so just the little kids get on him now. But I’d love to ride him, because he’s still one of my favorites. He’s a superstar.”

That’s a sentiment echoed by everyone at Work To Ride. The 18-year-old Pennsylvania-bred gelding who never won a race plays an important role.

“Cholo is still very active, still competing at polo matches. He’s got such a great attitude,” Hiner said. “He’s not retired at all. Too many kids to remember have learned to play on him. Not a whole lot rattles him. I could put a 5-year-old or a 35-year-old on him. He’s my Steady Eddie – I use him for everything.”