On a mid-April Saturday in Camden, S.C., Arch Kingsley, Sue Sensor and Melissa Rice gathered at The Camden Hunt stables. Spring was in resplendent bloom, and so was Top Striker, the reason for the assembly. 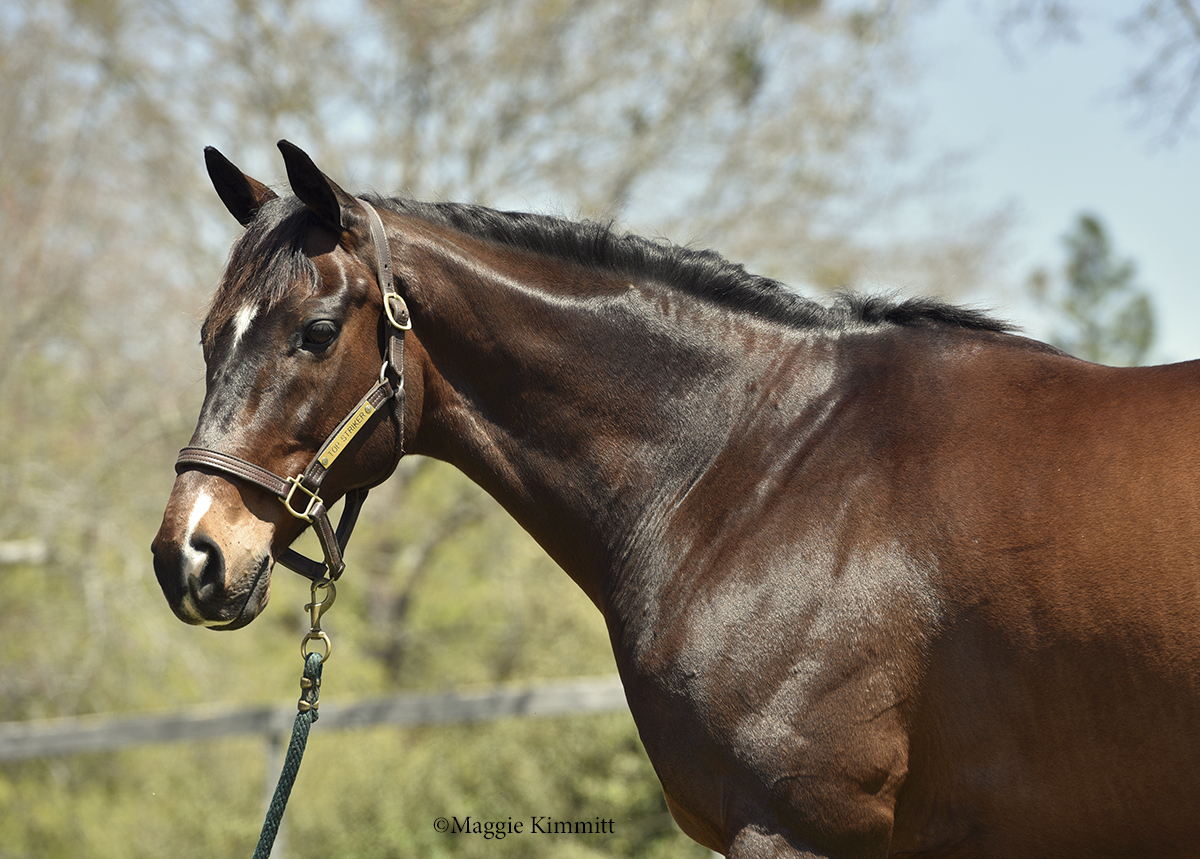 Kingsley trained the son of Van Nistelrooy and the Cozzene mare Two’s Cozy, bred in Maryland by Richard Golden’s Sycamore Hall Farm, for Sensor and her husband George. Rice, huntsman for Camden and now his regular pilot, led the gelding out for photos. Top Striker immediately posed, foot-perfect, and glanced at the camera.

“Oh – you’re not quite ready?” his expression said. “No worries, I’ll wait.” His coat is brilliant, burnished mahogany, gleaming from his chiseled head to his thick, tangle-free tail. His chest is broad, his hindquarters powerful. If Ferrari made tanks, they would look like Top Striker.

Back in the barn, he stood with his head over the stall door, part of the conversation. Sue Sensor stroked his nose as she explained crossing paths with a steeplechase prospect.

Champion steeplechase jockey Willie McCarthy, then a Camden resident, often relocated to the Maryland/Pennsylvania area during jump season and galloped for Michael Matz. McCarthy was the regular exercise rider for Top Striker in 2012 when the 3-year-old first arrived at Fair Hill from the barn of trainer Rodney Jenkins.

“I fell in love with him instantly,” McCarthy said. “A beautiful looking horse with a wonderful athletic attitude. Top Striker ticked all the boxes for me. I knew he had what it takes to be a top contender over hurdles.”

Not that Top Striker was some slow flat horse. He won his debut as a 3-year-old on the turf at Colonial Downs, and backed up that win with an allowance score at Delaware Park (both for Jenkins) in 2012. For Matz, Top Striker was beaten less than 3 lengths in two allowance races at Keeneland that fall. McCarthy recalled his first breeze. Dropping to the rail, the horse lowered himself and effortlessly slid into another gear. McCarthy sat quietly and let him roll, believing he had just nailed the half-mile maintenance work in 48 seconds.

“We jogged briskly back to Michael, who had a smile on his face. ‘That was very nice Willie, but a little quick, don’t you think? 46 and 4,’ he said. Right then I told myself ‘I’d like to ride him in a race someday, somehow.’ ” Top Striker won a $30,000 claimer at Gulfstream Park in January 2013, but was out of conditions and not headed up anybody’s ladder. McCarthy, then riding for Kingsley, called the Sensors. They were interested.

When Top Striker, all 15.3 of him, arrived at Kingsley’s Camden farm, McCarthy received a message from Sue Sensor.

“He’s gorgeous, but are you sure he’s big enough?”

McCarthy reassured Kingsley and Sensor. “He’s all engine,” he said. “I promise.”

Top Striker learned his lessons in two defeats, then won a maiden hurdle late in 2013 and opened the next season with a hometown win in the Carolina Cup novice stakes.

“That was a very special day for me, and one I will never forget,” said McCarthy. “I screamed, ‘We made it, my boy!’ with tears in my eyes as we crossed the wire.”

As Kingsley emphasized, Top Striker was no overnight sensation. After winning another novice stakes at Callaway Gardens in 2014, he finished fourth back home in Camden in the Colonial Cup-G1 behind Eclipse Award winners Divine Fortune and Demonstrative.
Like plenty of others before him, Top Striker navigated some soundness issues and the veterinarians cautioned Kingsley about plotting a comeback. “Tell that to a good horse, and they’re like ‘I will if I want to,’ ” Kingsley said.

Top Striker sat out 2015, returning to the races at Middleburg with a fourth in the Temple Gwathmey-G3 in April 2016.

“The Sensors gave me the time I needed to develop him,” Kingsley said. “If you have supportive owners who are not pushing the timeline and are letting you do right by the horse, it’s about three-quarters that and one-quarter good luck. This horse’s success was due to their blessing.”

Top Striker repaid his team with a busy and successful season in 2016. He hit the board at Great Meadow, Fair Hill, and Saratoga (twice) before returning to Great Meadow in October to win the Zeke Ferguson Memorial-G2. The best was still to come.

“I had thought it would be a one-horse race that day,” Kingsley said. It was, but the one horse was his. Top Striker sat just off Rawnaq throughout before overtaking him at the last fence and powering to a 10 1/2-length win. The hometown crowd lost its collective mind.

“When he jumped that last fence, I cried,” Sensor said. “And then it was like the afterburners came on with the crowd. He had been Camden’s horse for so long.”

“I’m still high on that Colonial Cup,” Kingsley said. “It was my first Grade 1 win as a trainer, so I’ll never forget that. And to do it here in Camden with the Sensors, that was as good as it gets.”

“He won a nice allowance at Tryon [on the flat], but he was beginning to unravel,” Kingsley said.

Top Striker relocated from Kingsley’s farm to the Sensors’ place on the other side of Camden, taking with him a record of 27-9-3-4 and $341,954 earned. “He was turned out, lived outside and he loved it,” Sensor said. “And he was just a gentleman, you could do anything you wanted with him. He loved the dogs – our dogs are retired foxhounds. Then we needed another horse here at the hunt.”

Camden’s master of foxhounds, Sensor sent Top Striker to Rice, who happily admits that she is intentionally stingy with the gelding. His endearing – and somewhat unusual – affection for the hounds also sets him apart. After decades of making horses for the hunt staff, she made Top Striker her gold standard.

“He is a phenomenal jumper, and for a steeplechase horse he is incredibly careful and still can make up time in the air,” she said. “He was strong at the track, and Arch trained him a lot in the country around here. So the first few hunts he would be like, ‘We’ve galloped 2 miles now, Melissa. Don’t we pull up?’ And for that whole 2 miles, he’s pulling me like a racehorse. But in the hunt field, he is bottomless. I baby him, and Sue enables me to do that.”