“Do you know who Jackie Wilson was?” Lucy Howard asked. “If not, watch some videos of him online, and then you’ll understand.” 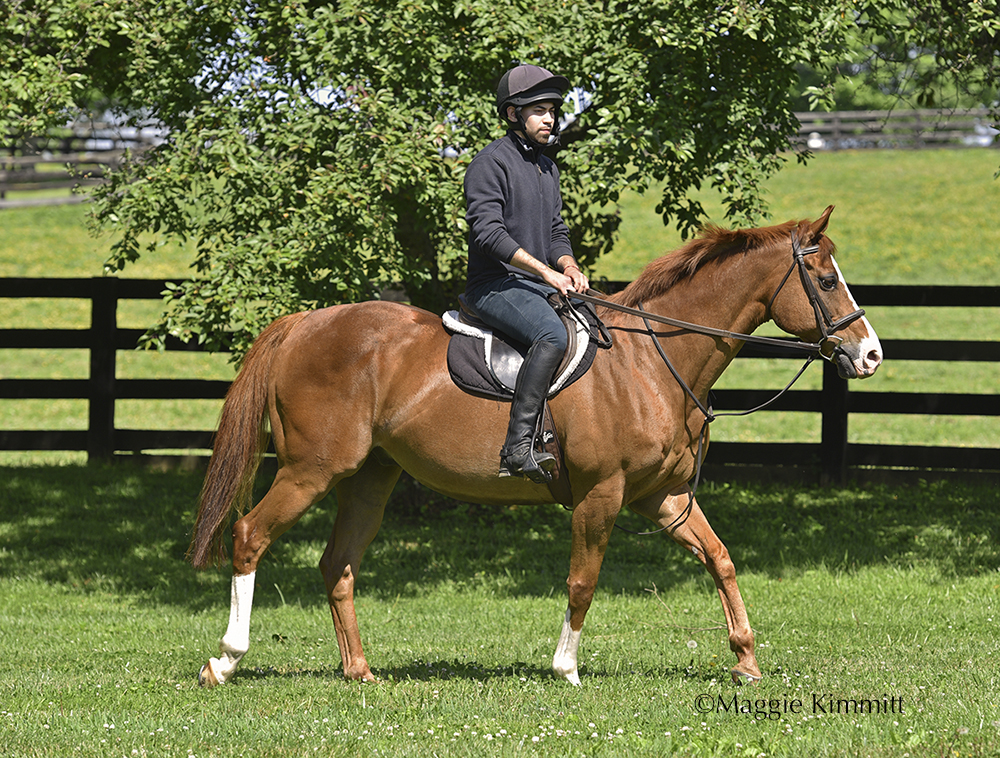 She’s right. Although the name of the diminutive gelding is an obvious nod to his sire, Citidancer, the similarities between him and the R&B recording artist of the mid-20th century could not have been forecast when Country Life Farm’s Josh Pons submitted the moniker to The Jockey Club. Josh and brother Mike Pons purchased the weanling son of the Woodman mare Promenade Lane for $6,200 from Fasig-Tipton Midlantic’s mixed sale in December 2004.

“I bought a share in Jackie when I was visiting Country Life on my way down to Maryland from New York City,” Howard said. “He was in a field, came over to the rail looking for attention and was so cute I could not resist even though I was not looking for another investment at the time.”

The colt was small, as in nearly pony-sized. His dam was a modest winner of two races and $15,760. But he had his sire’s good looks and blinding, bright chestnut coat. He was loaded with chrome and chutzpah. Cheekiness. Flash. Little Man Syndrome. Even as a youngster, the equine Jackie Wilson was He Who Will Not Be Ignored.

His human counterpart rose to fame as a dynamic performer whose legendary dance moves included splits, spins, knee drops and back flips. His impassioned performances earned him the nickname “Mr. Excitement,” and he is most well-known for the 1967 song “(Your Love Keeps Lifting Me) Higher and Higher.”

Country Life’s Jackie Wilson was bred in Maryland by Finale Farm, David Moose and John Foster. His blink-and-you-almost-missed-it racing career spanned eight starts as a 3-year-old from Jan. 11 through June 27, 2007. And Jackie got around a bit. Trained by Rachael Lively, he made two starts at Laurel for the Country Life partners before being claimed for $10,000 in his third start by trainer Dale Capuano Feb. 10.
Lively was locked and loaded when Capuano ran the gelding back on March 14, dropping the claim slip for new owner Lisa Richardson. Jackie Wilson broke his maiden in that 5 1⁄2-furlong contest on Laurel’s main track that day. At Pimlico a month later, he was eased after getting squeezed back at the gate and trailing the field.

Lively sent him to Charles Town next, and he was claimed for $10,000 by trainer Henry Worcester III. He bumped the horse up to allowance company three weeks later; he finished last.

All the while, Jackie Wilson’s original connections – Howard in particular – kept tabs on his whereabouts and results. When he headed to post for a 41⁄2-furlong claimer at Charles Town on June 27, trainer Tim Grams put up the $7,500, and the horse headed back home to Maryland. Six and a half months, eight races, one win, one second, two thirds and $12,170. Racing career done and dusted.

“Tim Grams claimed Jackie for me,” Howard explained, “and I then took him off the track. He was too cute to risk anymore.”

Jackie Wilson went back to Lively for a bit, then to hunter/jumper trainer Tim Maddrix for a horse show career and finally to Billy Santoro after Maddrix moved to Alabama.

Santoro, long a staple on the steeplechase circuit, operates Prospect Farm in Monkton, Md., with partner and fellow trainer Alicia Murphy. They have a laundry list of former and current top jumpers, many of whom retire to fruitful second careers as foxhunters and show horses.

“There have been a few notables who were under Jackie’s tutelage,” Santoro said. “While in training as a racehorse, Rosie Napravnik used to get on him. After he retired, Calixto Juarez dropped his son Nik off here one day and said, ‘Teach him how to ride.’ So Jackie was an early coach for Nik Juarez. I taught him how to gallop and all that sort of stuff. . . and now Nik’s story is well-known.”

A full-time jockey since 2014, Nik Juarez has won more than 843 races with purse earnings of more than $28 million. He rode 1,144 races in 2017. Now 17, Jackie Wilson more than holds his own amongst a Prospect Farm roster that includes Maryland Hunt Cup winners Private Attack and Twill Do and multiple timber stakes winner Cornhusker (GB).

Santoro opened the stall door and walked away, and fully-tacked Jackie Wilson came out and fell in behind him. Santoro turned right into the tack room and adjoining office, and Jackie Wilson followed suit, using the shortcut to walk through and emerge on the other side of the shedrow.

Outside, Prospect Farm staff member Nilson Guzman waited to hop on the gelding and pose for photos. The native of El Salvador has worked for Santoro for four years. Learning to ride was something he wanted to do since childhood.

“He’s an impressive horse, and it’s an honor for me to ride him,” Guzman said. “I’ve been hunting on him a couple of times. I’ve not been doing this very long. Billy taught me to ride on Jackie Wilson and Private Attack.” No old beater cars for this student driver. Guzman learned on Cadillacs. Santoro watched with obvious pride as Guzman rode Jackie Wilson across a broad lawn near the main barn. Guzman looks as though he was raised in the saddle, and Jackie Wilson’s larger-than-life persona belies his barely 15-hand stature.

“That,” Santoro nodded at the pair. “That’s what I mean about Jackie’s presence. Nilson is an excellent soccer player too. He’s a very natural athlete. The first time he sat on a horse, you could tell this was going to be easy. And he observes very well; he listens and always tries.” Santoro and Murphy are quick to point out that Jackie Wilson’s most important role is that of babysitter to any horse at Prospect Farm in need of a wingman. He’s turned out with all new arrivals. They need to train with a buddy? No problem. Company at the races? Jackie Wilson is on it; he’s up the ramp and on the van.

“He absolutely LOVES going to the races,” Santoro said.

Jackie Wilson remains a man in high demand by visiting riders, frequently requested as a mount in the hunt field.

“And everyone knows who he is,” Murphy added. “You’ll hear ‘That’s Jackie Wilson!’ ”

He and Murphy are always happy to oblige, but respectfully declined a recent ask to allow the gelding to travel this summer to a week-long pony camp in Camden, S.C.

“I don’t think we could stand being with­out him for that long,” Santoro grinned.