Beau Ridge Farm in Kearneysville, W.Va., is home to the state’s top stallion, Fiber Sonde. It is home to West Virginia’s top breeders, John and Cyndy (O’Bannon) McKee. And it is home to Last Enchantment, the quirky 26-year-old homebred gelding whose exploits are still remembered by many at nearby Charles Town Races 20 years after his retirement. 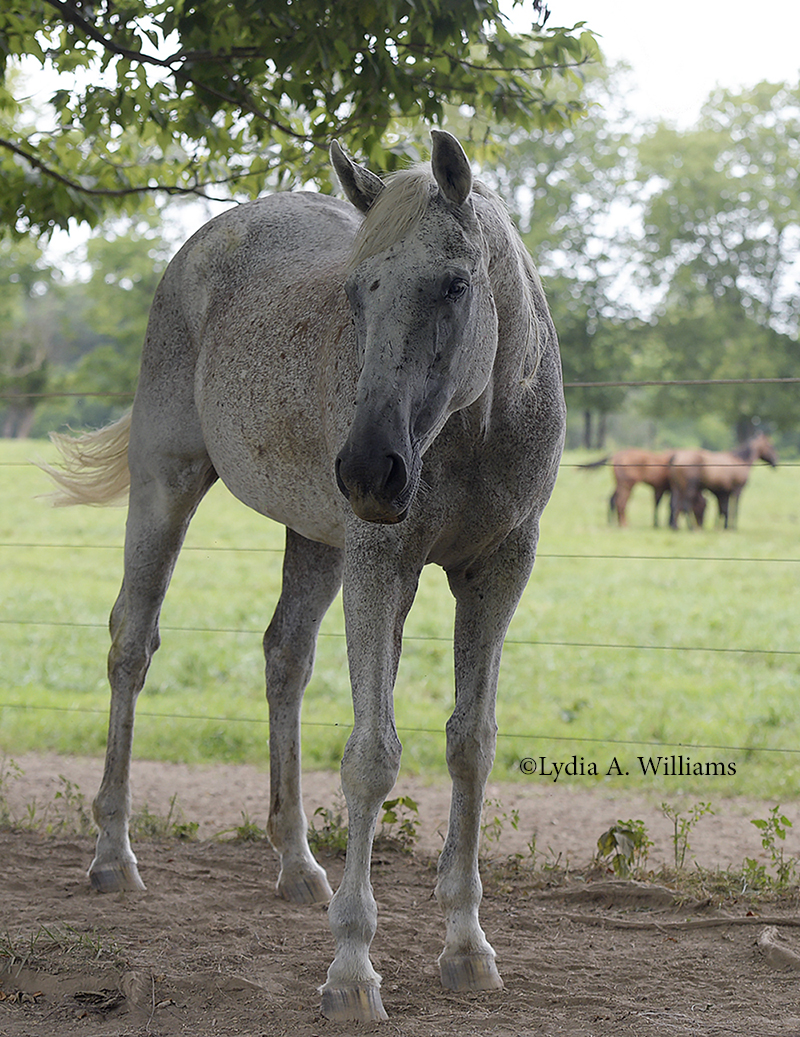 There was never any question that Last Enchantment would live at Beau Ridge. He is as much a part of the farm as the McKees themselves. His second dam was John McKee’s foundation mare Forbidden Wind (Restless Wind—Uninvited, by Social Climber). Forbidden Wind’s daughter Precious Cavalry (by Cavalry) produced Last Enchantment from the Mr. Prospector stallion Glide, who stood for a time at Beau Ridge before being sold to Korean breeders.

“Forbidden Wind was purchased in Oklahoma around 1969,” Cyndy McKee said. “So John can trace this horse’s family back to the beginning of the farm over 50 years ago.”

A lot of horseflesh has been bred, owned and trained by John McKee during that timespan. But while Last Enchantment didn’t have the most wins or the biggest bankroll, he was one of the most memorable. Or the most notorious. Potato, pototto. Last Enchantment was a challenge from the word go.

“Scottie Allen broke him for us and still talks about him,” Cyndy said. “He was very difficult to break. I tease Scottie all the time, saying, ‘He’s still alive, if you want to put the tack back on him.’ He says ‘NOOOOOooooo, he’ll probably still buck to this day.’ ”

In training at Charles Town, Last Enchantment – called “Merlin” at home – had to gallop in blinkers every day. Cyndy always ponied him to the track on her Paint horse, Magic Johnson. And she swears that if it hadn’t been for her western saddle, Last Enchantment would have yanked her out of the tack more than once.

But it was his penchant for the prop and wheel that earned the gray gelding his dubious reputation.

“He’d see something he didn’t like,” Cyndy said. “He’d be galloping, and then in one stride he’s heading in the opposite direction. I remember people saying they were galloping behind him, and he was going forward. Then all of a sudden he was heading back at them. He was very agile, and you could never fully relax on him. That was just him.”

Last Enchantment was also talented, although a bit on the small side as a youngster. As he was a late May foal, John McKee didn’t start him until the end of his 2-year-old season on Nov. 19, 1997. He broke his maiden in his second start three weeks later at Charles Town, the site of 53 of his 55 starts. McKee ventured to Timonium with the horse twice, winning a claiming race there in 1999 and returning to finish fourth the following year. Last Enchantment was a working man for sure, often running twice a month. More frequently than not, he earned a check. And, somewhat surprisingly, he was never claimed from the McKees. Perhaps his reputation preceded him? Cyndy McKee will allow it.

“Of course a lot of people saw him train, and he could be a bit of a pill when he wanted to be. He didn’t have a mean bone in him and is still a very kind horse. But he was a character.”

His shining moment came during his 5-year-old season on Sept. 16, 2000, winning the inaugural running of Charles Town’s Dash for Cash Stakes. The horse was bothered by grouchy ankles as time wore on, leading to his retirement after finishing second in a claiming race on Dec. 20, 2001. His resume boasts respectable stats of 55-14-8-4 and $125,516 earned.

He has lived at Beau Ridge’s 283-acre satellite location in Shepherdstown, W.Va., ever since and now hangs out with 15-year-old retiree Mickey Mac’s Turn, a miniature horse and two miniature donkeys.

“I was always afraid to start a second career with him,” Cyndy said. “I really was afraid to give him to somebody because I just never knew what he would do. I didn’t want to give him to someone who maybe wasn’t a good enough rider and have something go wrong. And not long after we brought him home, one ankle kinda locked up. So he’s been here as a pet ever since.”

As many retired geldings do, Last Enchantment helps raise the Beau Ridge Farm youngsters. Barren mares and yearlings are rotated out of the Shepherdstown property back to the farm’s main base with the new crop of weanlings taking their place late in the year. The McKees’ main residence is at the 170-acre Kearneysville location along with four stallions: Master Rick, Redirect, Spiritus Invictus and the aforementioned Fiber Sonde.

The plan is to sell the larger tract and centralize everything at the main farm.

“We are going to put that one on the market and try to cut back a little bit. John is 81 and I’m 63, so it’s getting harder and harder. So hopefully we’re going to combine and have everything in one place. Merlin will come back here then.”

His posse will come with him, so the old gray gelding won’t mind the new digs. And it will make stuffing him with carrots a lot easier for Cyndy. The carrot reference brought up a fond memory.

While the gelding was still in training at Charles Town, the McKees shared a barn with breeder/trainer James W. Casey. His wife, the late Eleanor Casey, walked down the shedrow handing out carrots every day, and she became completely enamored with Last Enchantment.

“She followed him and knew of all of his antics,” Cyndy said. “But she would tell him what a good boy he was, even though he was always so bad. He was such a favorite of hers.”