Her name is Cayman Queen. Her chestnut coat gleams like a newly minted penny. Her legs are tight and cool without as much as a blemish. Her eyes are bright, full of wisdom and expression. And if not for the slight dip in her back, you’d never guess she’s 31 years old. 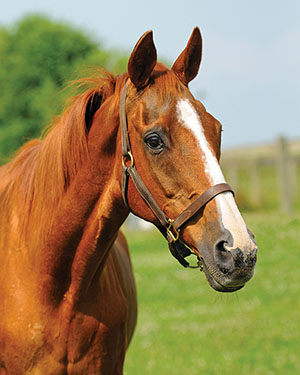 Her resume is an eyebrow-raiser. This was one tough redhead. She’s a throwback to another era – evidence that they do not, in fact, make them like they used to. Bred in Florida by W.P. Burch, she was sired by French Group 1 winner *Recupere and is out of the West Coast Scout mare Rubye Scout. Her career began as a 2-year-old in September 1983, and when it ended seven years later in November 1990, she had made 102 starts at 14 racetracks. From Fair Grounds in Louisiana to Rockingham Park in New Hampshire – and everywhere in between – Cayman Queen came, saw and often conquered.

Trained at points in her career by John Pregman, Paul Hartz, Joe Orseno, and finally Dan Peitz, she had her picture taken with all.

The roster of riders who were legged up on this grand old mare is loaded with A-Listers: Angel Cordero, Jerry Bailey, John Velazquez, Mike Smith, Randy Romero, Richard Migliore, Eddie Maple, Jose Santos, Jorge Velasquez, the late Chris Antley. She won at Belmont Park with Julie Krone. She loved Saratoga – as an 8-year-old in 1989, she made three starts there within 25 days, finishing third, first and second under Craig Perret. But her career-best performance came in 1987 at Rockingham when she captured the Princess Doreen Handicap by 6 lengths, setting a course record.

“If she didn’t perform well in the race, she’d be upset,” he said. “She stayed sound because she would take care of herself. If something was bothering her, she would not run. She’d just go for the trip.”

A native and resident of Syracuse, N.Y., Cotran kept her nearby and chose her stallions with turf in mind, breeding her to Carr de Naskra, Manila, Go and Go (Ire), With Approval, El Prado (Ire), Wekiva Springs and River Keen (Ire).

“I wanted grass runners,” he explained, “since most of her money was earned after we switched her to turf.”

She produced only seven foals, five to race. By far her best offspring has been the Wekiva Springs gelding Cuse, foaled in 2001.

Named for Cotran’s hometown and alma mater, Cuse made 17 starts on the flat over a two-year period for his owner and Pennsylvania trainer Richard Trimmer. His only win came at Penn National in 2004, and Cotran sold him after several dismal performances in the summer of 2005. He reappeared in the spring of 2007 as a steeplechaser for Tennessee-based owner/trainer Karen Gray, and it is over fences that the diminutive gray gelding made his mark. Still in training at 11, Cuse has now made more than 70 starts and his career earnings top $150,000. He won a race in April, after taking three last year.

Cotran pensioned Cayman Queen after she produced a River Keen filly in 2003 and sent her to Trimmer’s farm in Oxford, Pa.

“Richard started with Robert in 1995,” said Trimmer’s wife, Muffy. “Cayman was pensioned when she came here and has been here ever since. We’ve always had a lot of horses resting here; when we trained more horses, they always came back here. And any time we had an odd man out, we could turn it out with her and she didn’t care. She’s very maternal and kind; there’s not a mean bone in her body.”

Richard Trimmer trained all of Cayman Queen’s offspring for Cotran.

“She always passed on that kind of angular body that she has,” he said. “They were very sturdy, even as babies. None of them were very big, either. Cuse is tiny.”

Richard remembers Cuse causing a ruckus as a 2-year-old in their Fair Hill Training Center barn.

“Cuse was very studdish before he was gelded. There were some horses in from out of town stabling in our barn, and I think one of them must have done something that got him all worked up. He got out of his stall and caused such a commotion that other horses came through their webbings. He was exhausted, but he would not stop or let us catch him.”

Evidently he came by it honestly. Richard’s anecdote prompted his wife to remember and relay one of her own. Always animated, she explained that Cayman Queen had recently had a little adventure.

“A few weeks ago, she got out with my four Quarter Horses. One of them, Dial, is also 30 and he and Cayman are buddies. They’ll scratch each other over the fence if they’re turned out near each other. But anyway, I had turned them out in our back paddock, which has a smaller paddock inside that I put her in. So that afternoon she got out of there and got in with the other four, and all five of them were running all around.”

The excitement took place during a party for the Trimmers’ children, and it was the kids who first noticed that something was amiss. “The kids were like ‘Cayman’s out!’ And she’s cantering up the hill, down the hill, jumping over the stream. I thought she was gonna have a heart attack – but they were all fine. And she was leading the other four.”

Clearly hearing this story for the first time, Richard stared at his wife, digesting the details.

“I told you about this, remember? It happened when you weren’t here,” she said.

“But that’s Cayman,” Richard smiled, nodding. “You can take a horse that she doesn’t know, put the horse out there with her, and they’ll immediately be friends. She doesn’t fight them and they don’t beat on her either. All the horses that have been turned out with her get attached to her.”