The announcement struck momentary dread into the hearts of trainer Sherene Bracho and her former husband, jockey Jesus Bracho, when uttered by their young daughter Jacqueline 12 years ago. “Him” was Gilded Cove, a recently retired 8-year-old gelding trained by Sherene’s father, Victor Chung. 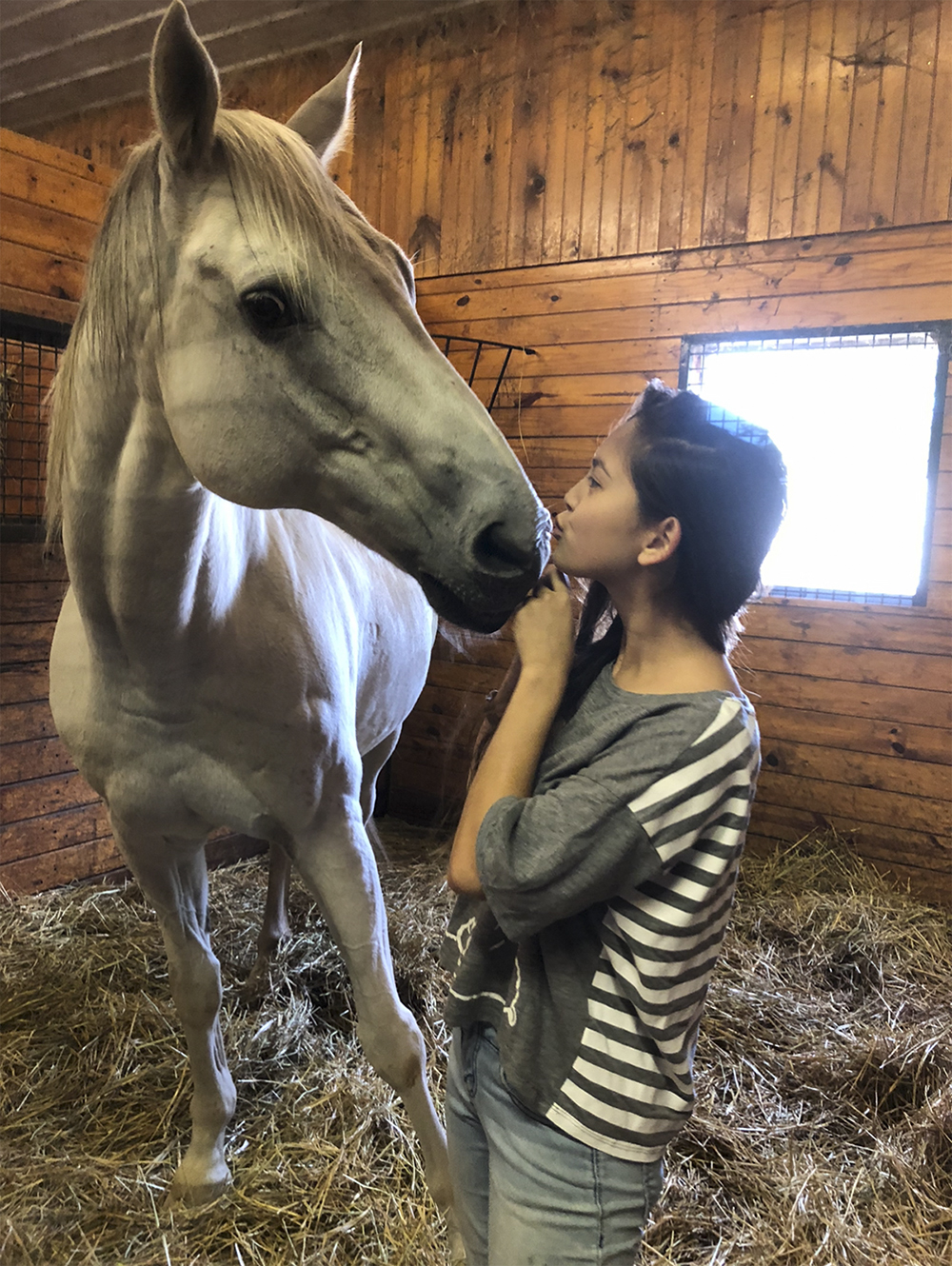 The Chung and Bracho families were well versed in all the horse’s habits and idiosyncrasies, and teaching Jacqueline to ride on him was never on any of their Bingo cards. But to a little girl who grew up seeing him in the barn, Gilded Cove “was that magical dream – a big, white horse.”

Shipped north to Monmouth that July, Gilded Cove was claimed twice at Delaware Park before Victor Chung got him for $7,500 for his family’s S.M.S. Racing at Laurel Park Nov. 17, 2005. The Mid-Atlantic tracks suited the horse; he was in the money in all 10 starts before Chung’s claim, including a win at Philadelphia Park.

He proved himself a blue-collar workhorse, running regularly – in claiming and lower-level allowance and starter allowances – and collecting checks more frequently than not over the next three years. Entered for a $16,000 tag at Philadelphia Park Oct. 27, 2008, he was claimed by trainer Scott Lake for Home Team Stables.

“We really didn’t think anyone would take him,” Sherene said. “We had put him in a bit over his head, thinking that would be his last race before giving him the winter off.”

She sent a message through a mutual acquaintance that they’d love to have the horse back when his new connections were ready to retire him. Lake ran Gilded Cove a month later in an allowance at Philadelphia Park; he finished last.

Young Jacqueline Bracho spoke up, telling her mother “This is my horse. I want this horse.”

“And he was a lovely, lovely horse,” Sherene said. “But he had dropped every single person that sat on him, including me. He was never dirty, but when he got spooked, he would whip really fast and drop us.”

In her early lessons, Jacqueline would ride beside her father, Jesus, in the paddock behind the family’s barn at Fair Hill Training Center. On the day of her first solo venture, he and Sherene stood at opposite ends of the paddock as Jacqueline pointed the horse toward her mother.

“When Jacqueline started to jog, she was just boing-boing-boing-boing on his back, the reins fell out of her hands . . . and Cove dropped his head, was as steady as can be and didn’t do a thing wrong. He guaranteed his life-long home that day; he was never going anywhere after that.”

Mother and daughter still laugh remembering the change in Gilded Cove’s demeanor once he began his second career as a little girl’s horse.

The pair gradually progressed to ponying on the track, with Jacqueline accompanying her father as he galloped or breezed their horses. One morning, Gilded Cove called a memorable audible.

As she jogged beside Jesus before turning him loose to breeze, Jacqueline felt her horse getting stronger.

“I told my dad I couldn’t hold him. So I let go of the pony strap on the racehorse, and I was just holding on. I was fighting Cove a little at that point trying to get him to stop. When we hit the turn he got on the rail, dropped his head, switched his lead and said, ‘I’m gonna finish first.’ ” Jacqueline knew enough not to panic. At first, Jesus attempted to ride up beside and grab her, but Gilded Cove stayed just far enough in front to prevent that solution.

“There was so much adrenaline and it happened so quickly that my thought process just kicked in,” Jacqueline said. “I can’t fight him anymore because that’s dangerous for both of us. So I relaxed. And Cove pulled himself up right past the wire. Afterward, I was shaking. But I was also walking home with a giant smile like ‘I’ll do that again.’ ”

They never did that again, but they did continue in their role at the barn for several years until two years ago, when Gilded Cove sent the message that he’d had enough. After two frightening episodes where the gelding acted up on the track and fled back to the barn – once with Jacqueline aboard and once loose – his days as the barn pony ended.

“We have a very close relationship, so I know him very well,” Jacqueline said. “He made it clear he was really done. After that we said it was dangerous for him and for me; he clearly didn’t want to do it anymore. So that’s how he ended up retired.”

A senior at Penn State in State College, Pa., Jacqueline graduates this month. She returns home every few weeks or so and visits the soon-to-be 21-year-old Gilded Cove, who lives at her mother’s farm in Avondale, Pa. “And that’s forever,” Sherene added.

“He’s just hanging out at home with other retired horses,” Jacqueline said. “I’ll go to pet him, and he’ll let me – but the second he sees a halter or a shank, he runs away from me. He’s made it very clear. I was like, ‘I was gonna bring you in the barn, but it’s OK. You enjoy being dirty outside.’ So I guess I don’t really have a big white horse anymore.”