It’s not how you start; it’s how you finish. Poppy’s Punkin earned high marks in both cases. He began his career with a resounding win on debut as a 3-year-old at Laurel Park in 2007. He finished six years later with another score at Pimlico. Now 18, the bay gelding enjoys a privileged retirement on Christy Clagett’s Larking Hill Farm in Harwood, Md. 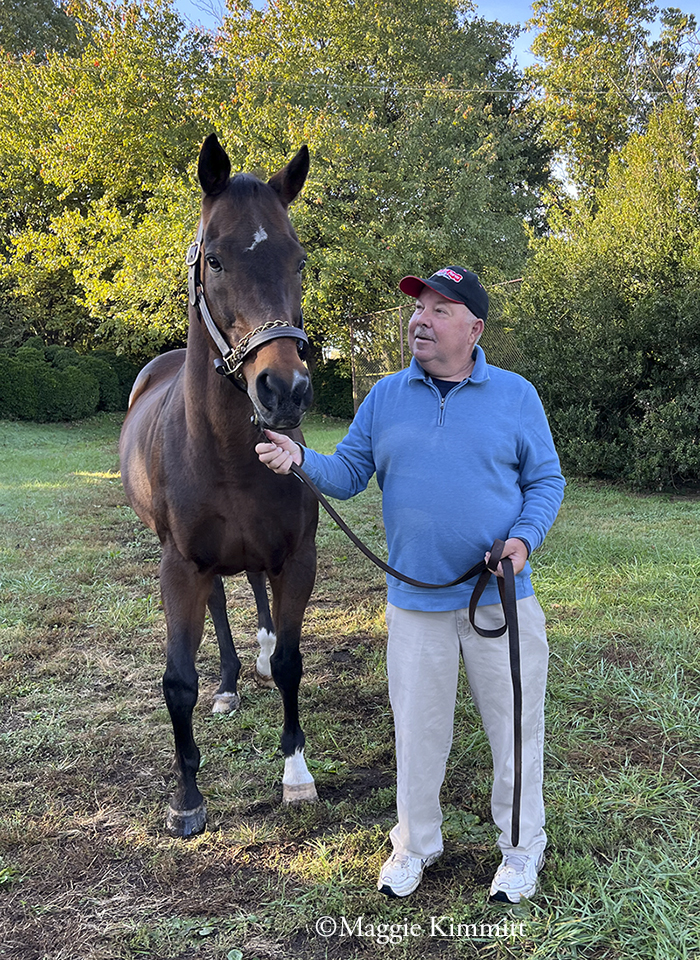 Bred in Maryland by Carol Horning-Whoerle, Poppy’s Punkin (Awesome Again—Poppy’s Passion, by Miswaki) ran in her name and was trained by her son, Larry Horning Jr. Horning trained for 33 years, retiring in 2013 after 212 wins and more than $3.1 million earnings.

Poppy’s Punkin’s older half brother (by Summer Squall), Captain Chessie, led the way among Horning trainees as the winner of the 2004 Taking Risk Stakes and $227,575. Poppy’s Punkin’s $196,315 put him second on Horning’s list, but when Horning decided to call it a day, Poppy’s Punkin followed him into retirement.

“My mother bred this horse, my dad and I bought his dam as a yearling [for $90,000] at Keeneland in 1987, she was named for my father,” Horning said. “All his grandkids called him Poppy, and his passion was horse racing. Poppy’s Passion was a freakish kind of horse. She only ran three times, won twice and got beat a nose in the other race. She used to run with her tail sticking straight out; she was special.”

Poppy’s Punkin was the last foal out of Poppy’s Passion to make it to the races. And the gelding’s first start convinced Horning the apple hadn’t fallen far from the feed tub. Going 5½ furlongs on the dirt at Laurel Park, he broke a step slow but immediately took over and led at every call. He backed it up with a third in allowance company next time.

“After that, I had calls from all over the country from people wanting to buy him,” Horning said.

Knee surgery to remove a bone chip stopped any serious thoughts of a sale, and Poppy’s Punkin returned as a 4-year-old. He won three of seven starts, wrapping up the season with a fourth in Laurel’s Jennings Handicap.

Back at age 5 in 2009, Poppy’s Punkin was sidelined again after just two outings. It was 13 months before Horning ran him again.

“He had recurring problems that kept popping up,” he said. “The whole family had issues with their feet. He had a condylar fracture and we had to put a screw in his front leg. He had colic, and thank God we caught it before it became necrotic. So he went through a lot, but he was a trooper.”

A trooper who absolutely loved to train – more so, Horning declared, than any horse throughout his long career.

“He LOVED it. He’d be the first horse on the track every day. I was at Bowie for 20 years, right in Barn Five next to the bridge. So he’d go to the track as soon as it opened, and he’d look like a reindeer out there lunging and leaping through the air, just having a good old time.”

Poppy’s Punkin’s good old time kept rolling when he returned to the races as a 6-year-old in 2010. Horning ran him in allowance/optional claiming races and the occasional small stakes, with his best black-type finish a second in the Chesapeake Stakes at Colonial Downs that summer.

In 2011, Poppy’s Punkin ran twice for a tag before winning a starter allowance at Timonium. But misfortune found him again, and he exited that race with an eye injury that prompted yet another hiatus.

“He came out of that race with a big cloud in his eye,” Horning said. “He was in front the whole way, so we’ve never been sure what got in there. My vet at the time thought it was an autoimmune thing; it would just come up in the spring and late summer.”

If you thought Poppy’s Punkin was finished, you were wrong. Never happy during his downtime, the 8-year-old came back in 2012. Horning again opted for allowance/optional claiming conditions for the first half of the season before testing the claiming waters at Delaware Park that July. He lost the horse for $20,000 to Scott Lake and owner Ben Mondello.

“Look, you’ve got to run them where they belong,” Horning said, “but I was upset to lose him.”

Three starts later, Poppy’s Punkin ran for a $5,000 tag at Parx, and trainer James Nicholson Jr. dropped the slip. Seven months later, Poppy’s Punkin made his final start in a waiver claiming event at Pimlico for Horning. The 9-year-old won by 1¾ lengths. Horning officially closed the book on his career with final numbers of 35-8-4-9 and $196,315.

“I had five stents put in my right coronary artery, so I said ‘OK, that’s it.’ I have nine grandkids and I wanted to be here for them. I wasn’t a young man, and training is very labor intensive.”

Like his gritty campaigner, Horning overcame a great deal before moving on to his next chapter. In 1985, he was the only survivor in the small plane crash that took the lives of fellow trainer and close friend Harrison Johnson and one of Johnson’s clients. The trio were flying from Saratoga to Virginia, with Johnson as pilot, when the accident occurred.

Poppy’s Punkin is the only horse Horning kept after finding homes and second careers for the rest of his runners. On Aug. 1, 2013, he moved the bay gelding to Larking Hill, just south of Annapolis and near his home in Harwood.

While many of his contemporaries enjoy the golf course, Horning prefers to spend his mornings visiting “Rooster,” as Poppy’s Punkin has always been called.

“I brush him every day, take care of his feet, muck his stall and fill a nice haynet for him. He knows my truck. I pull into the farm, and he starts screaming and yelling. He knows Daddy’s there.”

Horning can’t sing the praises of Larking Hill’s Christy Clagett loudly enough, crediting her with the care given his retiree, whose stall and paddock are closest to her house.

“He was always a very generous racehorse. He went out there and gave his best every time. And Christy takes such good care of him I could probably put a bridle on, lead him over to the paddock at Laurel and he’d fit right in.”